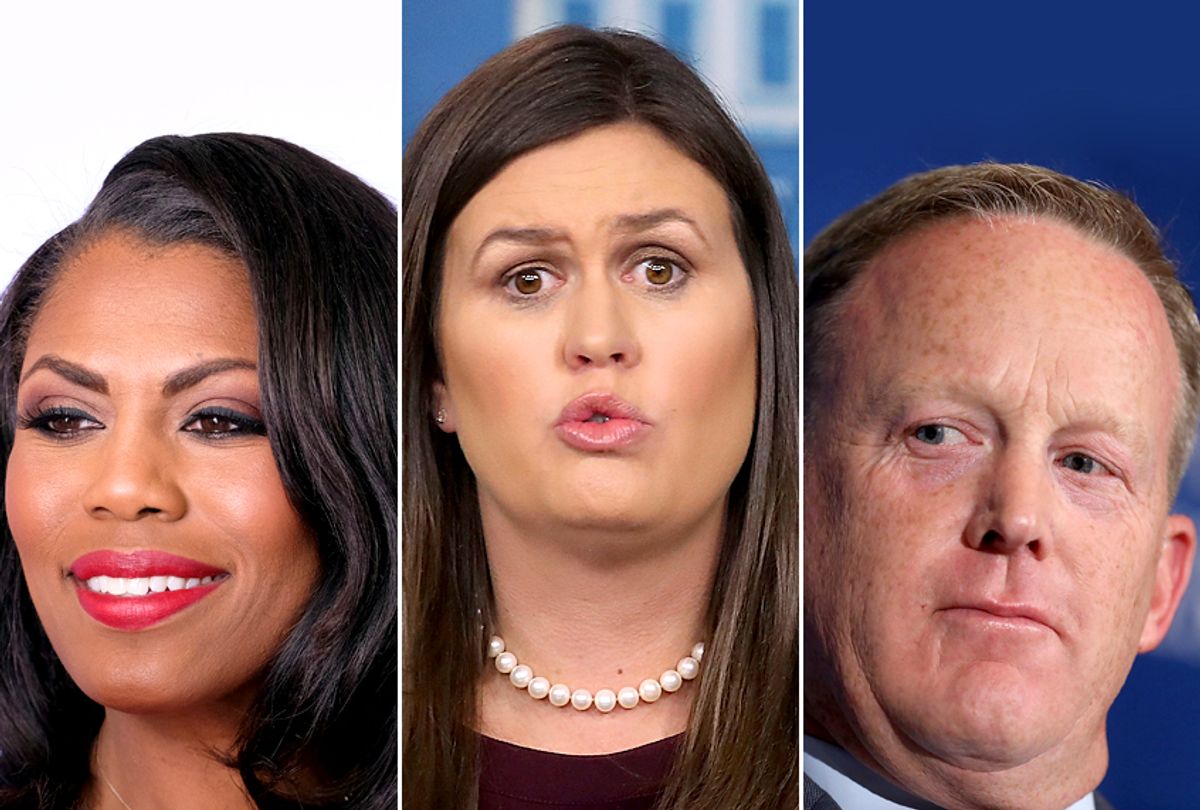 White House press secretary Sarah Huckabee Sanders offered a "correction" Tuesday after previously stating that President Donald Trump had created more than three times as many jobs for African-American workers in his year and a half in office than former President Barack Obama did in his entire eight years.

"Correction from today's briefing: Jobs numbers for Pres Trump and Pres Obama were correct, but the time frame for Pres Obama wasn't. I'm sorry for the mistake, but no apologies for the 700,000 jobs for African Americans created under President Trump," Sanders wrote in a tweet.

During the briefing Tuesday, Sanders sought to defend Trump's record on race, as former White House aide Omarosa Manigault Newman has called him a racist and revived allegations that there are tapes where the president can be heard saying the N-word.

"This is a president who is fighting for all Americans, who is putting policies in place that help all Americans — particularly African-Americans," Sanders said in the briefing. "Just look at the economy alone. This president, since he took office, in the year and a half that he's been here, has created 700,000 new jobs for African-Americans that are working now that weren't working when this president took place. When President Obama left, after eight years in office, he had only created 195,000 jobs for African-Americans."

Those numbers are wildly different from figures provided by the U.S. Bureau of Labor Statistics. Many outlets reported on the discrepancy and hours after the briefing, the White House Council of Economic Advisers apologized for providing Sanders with the incorrect figure, citing a "miscommunication."

CNN reports: "While it's true that the US economy has added about 700,000 jobs held by African American workers since Trump took office, it added about 3 million black jobs while Obama was in office, according [to] federal labor statistics."

It's important to add that the employment rate has steadily increased since Obama's first term, which coincided with the end of the recession, and that trend long predates Trump's inauguration.

So not only are the numbers off, but so are the economic realities between what Obama inherited as he took office in 2009 versus Trump's inauguration eight years later. In 2009, during one of the country's most dire recessions, 15.5 million African Americans had jobs, according to CNN. Eight years later, there were 18.4 million black workers. Furthermore, according to a comparison conducted by the Washington Post, "Over the last 19 months of Obama’s administration, more jobs were created for black and Hispanic Americans than the same period under Trump." The Post found that whichever way you examined and compared the data to Obama's record on employment rates, Trump "underperforms."

Sanders said in her correction that the timeline was off, but the job numbers were correct. That is also questionable. "Rather than tallying job growth since Trump took office in January 2017, the advisory council posted figures that include the three months since Trump's election while Obama was still president," according to CNN. "The time period attributes an additional 140,000 new jobs for African-Americans to Trump even though Obama [was] still in office. And it attributes 162,000 African-American jobs lost to Obama though it occurred during the economic recession when George W. Bush was still president."

While the visual provided by the Council of Economic Advisers in its apology tweet identifies these dates, Sanders did not make clear in either her original assertion or her apology, that the numbers she cited overlapped with the Obama administration.

Nonetheless, Sanders' correction was a rare moment admission of error from the Trump White House and specifically from the communications department, which has repeatedly spun out falsehoods in the face of clear contrary evidence — from Sanders incorrectly claiming that diversity visa immigrants are not vetted to her declaration that "multiple news outlets" reported that Obama had allegedly ordered wiretapping of Trump as a candidate.

Meanwhile, Sanders has attacked former White House aide Manigault Newman's credibility. In a statement addressing the latter's tell-all memoir, "Unhinged," Sanders said, "Instead of telling the truth about all the good President Trump and his administration are doing to make America safe and prosperous, this book is riddled with lies and false accusations."

She continued by saying it was "even worse that the media would now give her a platform, after not taking her seriously when she had only positive things to say about the president during her time in the administration."

Sanders' harsh words for the media fit into a larger pattern. Just a few weeks ago, she refused to acknowledge that the press is not the "enemy of the people," as the president has so often put it. The media attacks "the president for his rhetoric when they frequently lower the level of conversation in this country," Sanders claimed.

Even former White House press secretary Sean Spicer, who mocked the lies he told about Trump's inauguration crowd during last year's Emmy ceremony, has called out Manigault Newman's credibility. Earlier this week, Spicer joined Fox News' Laura Ingraham to discuss "Unhinged" and the various claims about the president made by Manigault Newman, a woman Ingraham described as a "vulture."

"She continues to make stuff up," Spicer said on "The Ingraham Angle" on Monday." "The president is right, there's two folds: There's one, what she has done, the disloyalty and the spreading of false information." He added that the second issue is that "media outlets that know she is spreading falsehoods, that decry fake news, are suddenly treating her like a celebrity, because she is attacking the president."

It's a bold statement coming from Spicer, given the striking similarities between himself and Manigault Newman. Both have sought to profit from their time in the White House, and from the lies they spread, by selling first-hand accounts of life in the White House and inside dirt on the president now that they no longer work for him. In truth, those who emerge from Team Trump, from Sanders to Spicer to Manigault Newman, are all unreliable narrators.

How trolls took over the GOP.