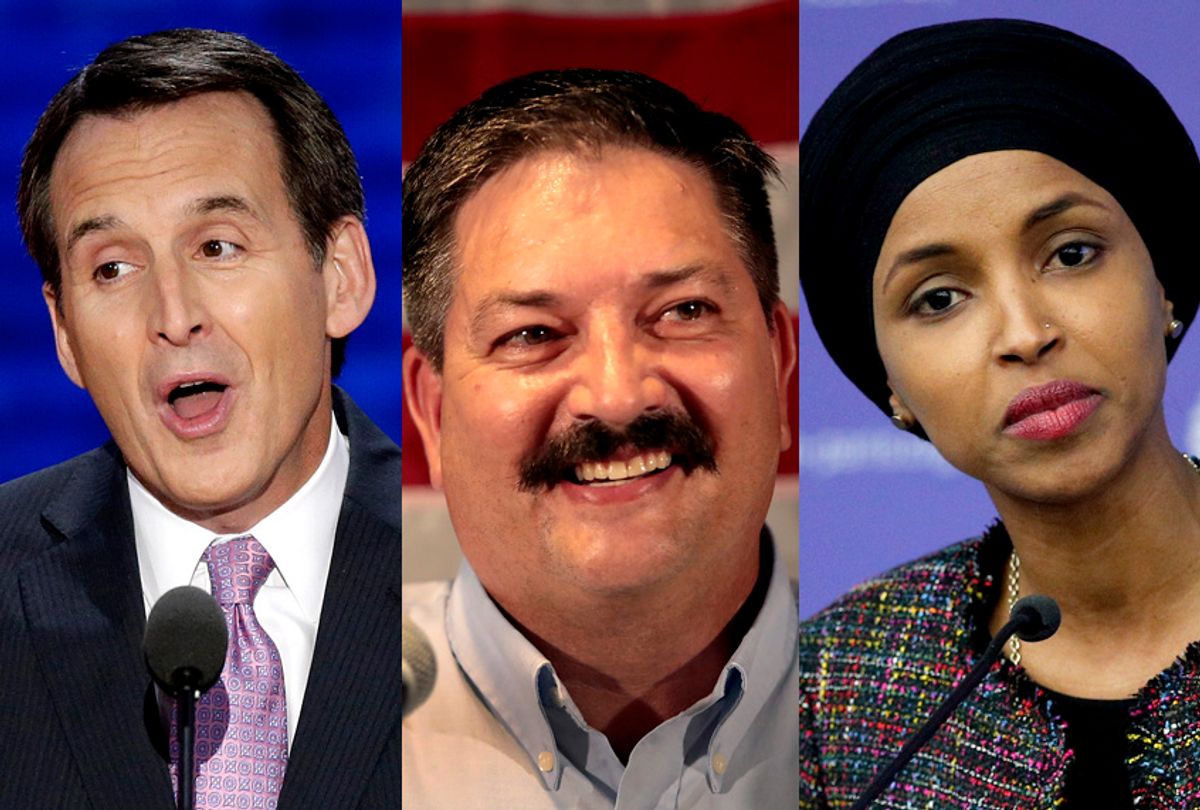 Tuesday contained important election results, from Minnesota and Kansas to Connecticut to Vermont.

A major historic moment for transgender politicians occurred in Vermont.

Christine Hallquist made history on Tuesday by becoming the first transgender woman to be nominated by a major party for a United States governorship. Because she won the Democratic primary, she could very likely become the first transgender governor in American history. Her platform was standard fare for progressive Democrats, including support for Medicare for all, free higher education and a $15 minimum wage. She also supports expanding access to renewable energy and high-speed broadband.

"Tonight we made history, and I'm so honored to be . . . part of this historical moment. I'm so proud to be the face of the Democrats tonight," Hallquist said to her audience in Burlington after winning the nomination.

Keith Ellison won the primary for attorney general in Minnesota and could become the first Muslim to hold that position. He'll likely be replaced in Congress by a Muslim woman.

Rep. Keith Ellison, a Minnesota Democrat who became the first Muslim elected to Congress in 2006, may make history again after winning the Democratic primary to become Minnesota attorney general, according to NPR. His triumph has been somewhat tainted, however, by an accusation of domestic abuse three days earlier from the son of Karen Monahan, who claimed that he had seen a video of Ellison dragging his mother off of her bed by her feet and yelling at her to get out of their house. Monahan later tweeted, "What my son said is true. Every statement he made was true.@keithellison, you know you did that to me. I have given every opportunity to get help and heal. Even now, u r willing to say my son is lying and have me continue to leak more text and info just so others will believe him"

Ellison vehemently denies the accusations against him.

He'll likely be replaced in Congress by another Muslim — 36-year-old Minnesota state Rep. Ilhan Omar, a Somali refugee who immigrated to the United States as a teenager. If she prevails over her Republican competitor in the heavily Democratic Fifth Congressional District in Minnesota this fall, she'll likely be one of two Muslim-American women elected to Congress ever. Omar is expected to be joined in the House of Representative next January by Michigan’s Rashida Tlaib, who won last week’s Michigan primary to replace disgraced Rep. John Conyers, who resigned last year amidst sexual misconduct allegations.

Jahana Hayes made history on Tuesday when the former "National Teacher of the Year" won a Democratic primary to represent Connecticut's fifth congressional district. In addition to being a former teacher, Hayes also used to be homeless.

"Well, when I was younger, with my mom, we lost our apartment, and that’s how I went to live with my grandmother. My mom struggled with addiction, my grandmother raised me, I was a teenage mom — all these things that traditionally would have caused people to disengage from their communities," Hayes told The New York Times.

In that same state, Ned Lamont — a staple in Connecticut politics who lost previous bids for the Senate and governorship — won the Democratic primary for governor on Tuesday, according to The New York Times.

Big news in Wisconsin for both progressives and conservatives.

Randy Bryce, the left-wing ironworker seeking to win Wisconsin's 1st congressional seat (which is currently occupied by Speaker of the House Paul Ryan), won in his primary on Tuesday, according to The New York Times. This occurred despite efforts by his primary opponents, and now by Republicans, to draw attention to his arrest record from the 1990s which involved drunk driving and possession of marijuana.

Conversely, a candidate who was backed by Gov. Scott Walker's political machine (but not directly endorsed by the governor himself) prevailed against a well-financed opponent on Tuesday. As Politico reported:

How did Leah Vukmir withstand more than $10 million in spending by Kevin Nicholson and his deep-pocketed allies to capture the GOP Senate nomination in Wisconsin? By running up huge margins in the Milwaukee suburbs, which have been the center of Republican power in the Walker era.

Kansas Secretary of State Kris Kobach was declared the victor in a key Republican primary — to Democrats' delight.

After a week of uncertainty regarding the outcome of a closely-contested gubernatorial primary between Kobach and the incumbent governor, Jeff Colyer, Republicans in Kansas finally received some momentary closure as Colyer conceded defeat to Kobach on Tuesday, according to CNN. Yet that doesn't mean all is well for members of the GOP in the Sunflower State: Because Kobach is viewed as a member of the far right and Kansas has been torn by teacher protests over education funding, the state is viewed as uniquely vulnerable to being picked up by the Democrats, despite its normally conservative leanings. If Kobach does become governor, however, his victory will be viewed as a major triumph for Trump, whom Kobach has vehemently supported. It will also empower Kobach to pursue one of his major policy goals — more restrictive voting laws, a position that got him appointed to head Trump's now-disbanded voting commission, where he falsely claimed that there was evidence of widespread voter fraud.

Trump's power over the Republican Party was confirmed in Minnesota.

Just as Kris Kobach seemed to benefit from being supported by Trump in Kansas, so too did former Minnesota governor Tim Pawlenty seem to suffer on Tuesday because of his past comments criticizing the president. Given that they are Trump's favorite mainstream media outlet, Fox News' coverage on the Minnesota gubernatorial primary is quite telling:

Tim Pawlenty -- who briefly ran for president in 2012 and had derided President Trump as "unhinged" -- was denied in his effort to stage a political comeback and become Minnesota’s governor again in the race to replace Democratic Gov. Mark Dayton.

County Commissioner Jeff Johnson won in Tuesday's Minnesota GOP gubernatorial primary despite Pawlenty's enormous fundraising and name recognition advantages. He also won despite his own history as the party's losing candidate for governor four years ago.

Pawlenty joins several other prominent Republicans -- including Reps. Martha Roby and Mark Sanford, as well as Sens. Jeff Flake and Bob Corker -- who have recently suffered major political consequences, at least in part, for opposing Trump.

Randy Bryce on the importance of labor unions