Newspapers join hands to proclaim they're not enemies of the people. Symbol of resistance, or just pathetic? 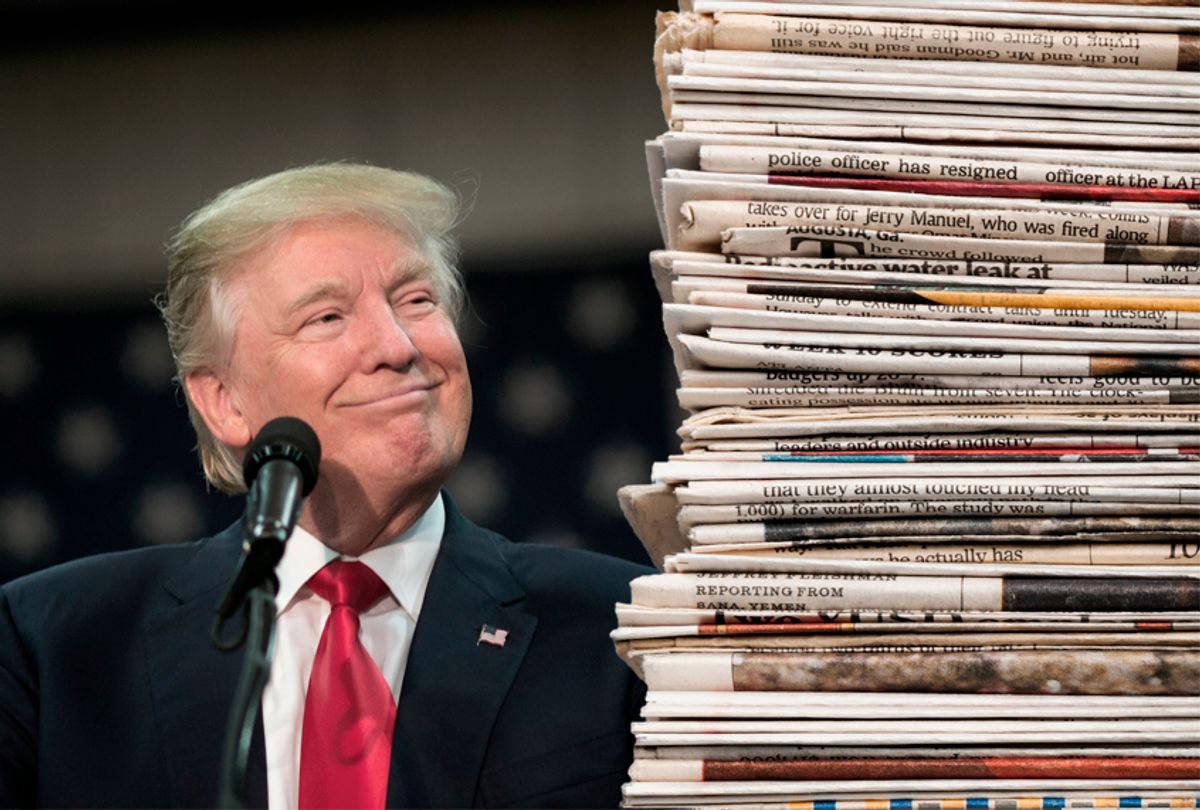 It’s a tragic and ironic turn of events that America’s daily newspapers felt the need to declare a special day of solidarity in order to defend their First Amendment rights — supposedly the most cherished and most central plank of our constitution — against the president of the United States. Isn’t the task of journalism to stand up for the truth, and for the spirit of open inquiry and discussion, every day, in the face of certain criticism from those who would prefer to avoid those things?

I presume the editorials published by dozens, if not hundreds, of American newspapers on Thursday — proclaiming that they do not publish “fake news” and are not the “enemies of the people” — are meant to be an inspiring show of unity in support of our most fundamental liberty. OK, maybe. It definitely took courage for small papers in conservative communities — the Columbian-Progress, say, in small-town Mississippi, or the Hazen Star, in North Dakota — to stand up for principle in a context where they are no doubt barraged with hate mail from their neighbors. But on a larger scale, this whole exercise feels more like a desperate scramble to protect a damaged business model and a social institution plagued by existential doubt.

Perhaps it was a sensible strategic decision that nearly all those Thursday editorials declined to mention Donald Trump's name. (Which of course did not stop the president from launching an angry Twitter tirade claiming that the Boston Globe, which initiated the protest, was "in COLLUSION with other papers on free press.") But that too is a testament to our nation’s dire predicament: We face seemingly intractable political, cultural and economic divisions, and every major social institution is widely viewed with mistrust. As has been widely observed, even the existence of facts and the category of truth are in doubt, a long-brewing phenomenon that cannot solely be blamed on the media, on Trump, on left-wing academic theory or on Russian spies.

Readers will notice that this is not an unsigned editorial. We don’t do that here. Salon was founded in 1995 by a band of refugees from daily journalism. Most of them, including our founding editor David Talbot, had spent years at the San Francisco Examiner, once a major metropolitan paper owned by Hearst (and today a downsized, free tabloid that publishes only local news). We have published a multiplicity of voices and viewpoints over the last 23 years — even conservatives, from time to time! — but have never pretended to be a neutral or impartial source of news. Such a position is not available to anyone, and the high-minded View From Nowhere favored by the editorial pages of mainstream newspapers (to borrow the famous phrase of press critic Jay Rosen) has always been a fiction used to conceal a specific set of political and cultural assumptions.

But if we feel a certain ambivalence about the codes and conventions of mainstream journalism — shared by many other “alternative” publications, a term that sounds quaint or downright meaningless these days — we absolutely depend on the work done by reporters and editors at the major national papers. Of course we’re delighted when we can scoop the New York Times and the Washington Post on a topic of particular interest to our readers, or get out ahead of the major media on a cultural trend. That’s our job. So is trying to identify the addictive or self-reinforcing narratives employed by mainstream journalism, and calling them into question as best we can. Did we really need all those pseudo-anthropological interviews with “working-class” Trump voters as they drank watery diner coffee in West Wherever? Is the idea that everyone should have health care and earn a living wage really a left-wing or “socialist” proposition certain to horrify normal Americans?

But we don’t kid ourselves: No publication at our scale (or anywhere close to it) can hope to compete on a daily basis with the major papers’ massive teams of reporters, their extensive resources or their deep institutional connections in the corridors of power. A great deal of what we do, and what our friends and rivals in the more-or-less-independent media do, is inescapably driven by what they do.

Maybe this week’s collective action has symbolic power. Maybe it’s important for Americans across the country and across the political spectrum to see a united front of resistance against President Trump’s venomous and dangerous rhetoric, from newspapers large and small who certainly don’t all agree about immigration policy or abortion rights or the meaning and importance of the Russia scandal. But the War for Truth will not be won by ritual self-congratulation, or by standing on a metaphorical soapbox and reciting quotations from Thomas Jefferson.

Does anyone actually think those things will cause Trump’s core supporters — who have already traveled a startlingly long way down the road to fascism — to repent, or will lead “mainstream” Republicans who have forced themselves to guzzle the Trump Kool-Aid to reconnect their brains to their spines? Of course not. This week’s assertion of basic constitutional rights that are supposed to be obvious to everyone is no better than a defensive crouch, a “let’s hope for the best” Hail Mary, not dissimilar to the Democratic Party’s decision to avoid any specific policies or principles in this fall's campaign, except for not being overtly hateful and corrupt.

Many reporters and editors at major newspapers have responded to the national crisis exemplified by the Trump presidency with energy and ingenuity, and have helped us make sense of a chaotic and confusing news cycle too easily dominated by one individual’s Twitter feed. We owe them an enormous debt of gratitude, and what they have received instead is ceaseless vilification by the president and his supporters. What the mainstream media has not done, and likely cannot do, is to reckon seriously with the ways its ingrained assumptions and pre-existing narratives helped create this crisis in the first place. (And the ways they continue to frame how we understand it.)

Historians of the future — assuming there will be historians, and a future — are sure to deliver a mixed verdict on the conduct of American journalism during this period of spectacular democratic decay, and perhaps democratic collapse. We can only hope that strength and courage and the best semblance of clear-eyed vision will count for more in that accounting than will the reliance on outmoded codes and worthless conventional wisdom. In either case, this week will not be remembered as the profession’s finest hour.