No, NASA has not been playing music to wake up the Opportunity rover 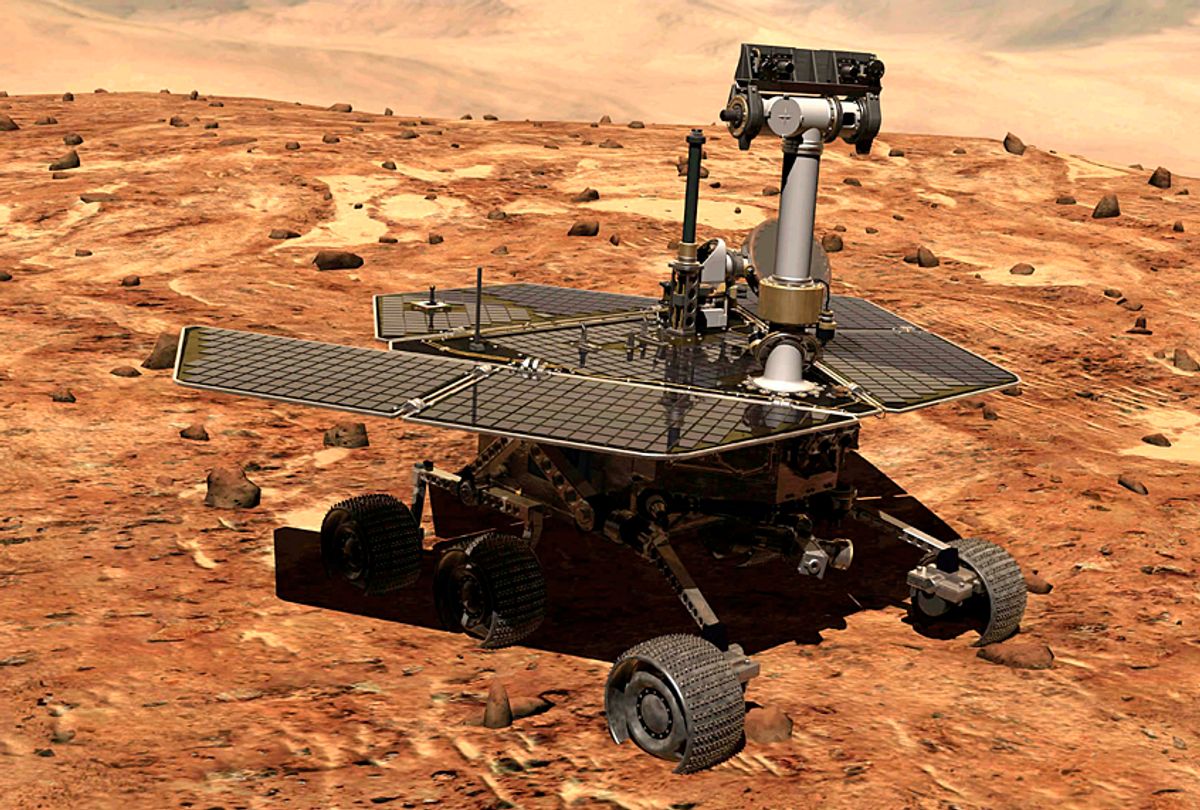 The Mars rover, named Opportunity, is shown in this artist conception. (AP Photo/NASA)
--

It’s been a quiet summer for engineers in NASA's Mars Exploration Rover program. Indeed, it has been more than two months since they have heard from the space agency’s Opportunity rover, which lost power during a massive Martian dust storm in June. Engineers are worried about the possibility that Opportunity is lost for good, but have not lost all hope yet.

This week, reports surfaced claiming that engineers have turned to an alternative way to wake up Oppy though: music—specifically, using songs such as Kansas' "Dust in the Wind" and Wham!'s "Wake Me Up Before You Go-Go.” Sadly, this is not true, although engineers have been turning to music to lift their spirits a bit in the control room.

Andrew Good, a media relations spokesperson at NASA, told Salon this claim was taken out of context from a Space.com story in which engineer Michael Staab was quoted as saying that the engineers have been playing music in the control room. Playing a “wake-up” song in the control room reportedly dates back to Opportunity’s earlier days.

“They don’t actually send this music across space during the Opportunity listening periods,” Good explained in an email. “They just play different songs themed around listening, or waking up, etc. Even if they were sending music across space, it’s not like this music would do anything to the rover.”

In case you are not up to speed with Opportunity’s summer, a rare weather event on Mars put it in an compromised position. The rover, which touched down on Mars in January 2004, receives its power from the sun — unlike the car-size Curiosity rover, which is powered by a plutonium radiothermal generator, or RTG. In June, the unusual Martian dust storm blackened out the sun, and that caused Opportunity’s power supply to drop steadily: from 645 watt-hours, to 345, and finally to merely 22 watt-hours — “little more than what a large iPhone’s battery holds,” as Salon's Keith A. Spencer has noted.

Opportunity has experienced astounding success in its tenure. In its early days, it would have been unthinkable to imagine where it is today. Its twin, Spirit, ran into complications in 2009 and ceased communications permanently in 2010. The rover has exceeded its planned 90-day mission by almost 15 years.  This is the first time it has not resumed communication as engineers expected.

This history of resilience in the face of danger, while perhaps attributing human qualities to a machine, has kept many optimistic about Opportunity’s chance at survival. In a blog update on Thursday, scientists expressed their enduring optimism.

"They've performed several studies on the state of its batteries before the storm, and temperatures at its location. Because the batteries were in relatively good health before the storm, there's not likely to be too much degradation," the statement explained. "And because dust storms tend to warm the environment -- and the 2018 storm happened as Opportunity's location on Mars entered summer -- the rover should have stayed warm enough to survive."

In good news, the massive dust storm has showed signs of slowing down. In NASA’s update on Aug. 7, the agency reported:

There are indications that the atmospheric opacity might be decreasing over the Opportunity site. Since the last contact with the rover on Sol 5111 (June 10, 2018), Opportunity has likely experienced a low-power fault and perhaps, a mission-clock fault. Additionally, the up-loss timer has also since expired, resulting in another fault condition.

“Dust-lifting sites have decreased and surface features are starting to emerge,” the report stated.

The science team at NASA continues to listen every day for the Opportunity, in addition to sending a command three times each week “to elicit a beep if the rover happens to be awake."

Earthbound listeners likely won’t hear anything from Opportunity, however, until the dust literally settles.