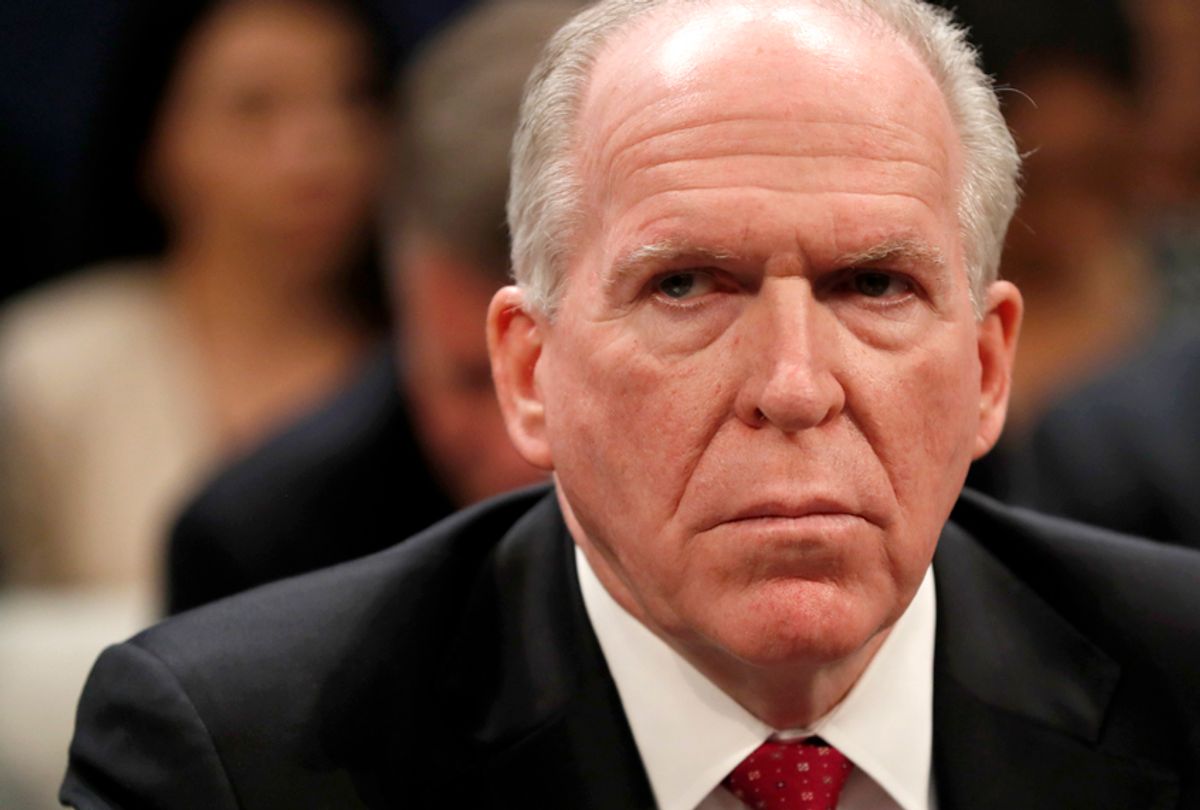 "We feel compelled to respond in the wake of the ill-considered and unprecedented remarks and actions by the White House," the senior officials wrote in their statement. "We know John to be an enormously talented, capable and patriotic individual who devoted his entire adult life to the service of this nation."

"John has chosen to speak out sharply regarding what he sees as threats to our national security. Some of the undersigned have done so as well," the letter said. "Others among us have elected to take a different course and be more circumspect in our public pronouncements."

The rare condemnation from the former top officials from various Republican and Democratic administrations — including past CIA directors who served under Presidents Ronald Reagan, George w. Bush and Bill Clinton — comes one day after Trump yanked Brennan's security clearance and said he would weigh whether to strip clearances from other former intelligence officials.

That decision from the White House "has nothing to do with who should and should not hold security clearances — and everything to do with an attempt to stifle free speech," the former senior intelligence officials wrote in their letter. "You don't have to agree with what John Brennan says (and, again, not all of us do) to agree with his right to say it, subject to his obligation to protect classified information."

During an afternoon press briefing Wednesday, White House press secretary Sarah Huckabee Sanders read a statement from President Donald Trump that criticized Brennan for what he called "lying." The president's statement said that the Obama-era CIA director had "leveraged his status as a former high-ranking official with access to highly sensitive information to make a series of unfounded and outrageous allegations — wild outbursts on the internet and television — about this administration."

Trump added, "That conduct and behavior has tested and far exceeded the limits of any professional courtesy that may have been due to him."

In their letter, the signatories fiercely defended Brennan's ability to express his views and denounced the commander in chief for using security clearances as a political tool.

"[W]e all agree that the president's action," they wrote, "has nothing to do with who should and should not hold security clearances – and everything to do with an attempt to stifle free speech."

Brennan has been one of Trump's most outspoken and consistent critics since leaving his post at the CIA, where he served during the Obama administration from 2013 to 2017. Most recently, the Obama-era CIA director blasted Trump  for calling former West Wing aide Omarosa Manigault-Newman a "crazed, crying lowlife" and a "dog."

"It's astounding how often you fail to live up to minimum standards of decency, civility, & probity," Brennan tweeted. "Seems like you will never understand what it means to be president, nor what it takes to be a good, decent, & honest person. So disheartening, so dangerous for our Nation."

In a scathing op-ed published Thursday in The Washington Post, retired Navy Admiral William McRaven, who oversaw the Navy SEAL raid that killed al-Qaeda leader Osama bin Laden, spoke out in support of Brennan, called the Obama-era CIA director "a man of unparalleled integrity, whose honesty and character have never been in question, except by those who don't know him."

"Therefore," McRaven wrote, "I would consider it an honor if you would revoke my security clearance as well, so I can add my name to the list of men and women who have spoken up against your presidency."

Sanders had first announced that the White House was "exploring the mechanisms" for stripping the security clearances for Brennan and several other former officials late last month, one week after the president's meeting with Russian president Vladimir Putin in Helsinki, which Brennan called "nothing sort of treasonous." At the time, Sanders said the administration was considering the move because the officials have "politicized and in some cases, monetized their public service and security clearances."

"I don't trust many of those people on that list," Trump said in an interview Wednesday with the Wall Street Journal. "I think that they're very duplicitous. I think they're not good people."

Trump also drew a direct link between the officials' response to special counsel Robert Mueller's ongoing investigation into members of Trump's campaign's contacts with Russia during the 2016 presidential election — and expressed his personal aversion for it. "I call it the rigged witch hunt, [it] is a sham," he told the outlet. "And these people led it!"

"So I think it's something that had to be done," Trump added.

Brennan swiftly responded to the news of the president's decision, denouncing the move in a tweet just tow hours after Sanders shared Trump's statement. In a tweet, Brennan called the decision "part of a broader effort by Mr. Trump to suppress freedom of speech & punish critics." He also published a blistering op-ed in The New York Times, in which he called Trump's claims that no one in his campaign colluded with Russia "hogwash" and Mueller's investigation into the matter "critically important."

"Mr. Trump clearly has become more desperate to protect himself and those close to him, which is why he made the politically motivated decision to revoke my security clearance," Brennan wrote in The Times, "in an attempt to scare into silence others who might dare to challenge him."

In their joint letter, the ex-intelligence chiefs emphasized Brennan's point. "We have never before seen the approval or removal of security clearances used as a political tool," they wrote.

"[T]his action is quite clearly a signal to other former and current officials," they said. "As individuals who have cherished and helped preserve the right of Americans to free speech – even when that right has been used to criticize us – that signal is inappropriate and deeply regrettable."