Trump ties enemies list to Mueller probe: Like after his firing of James Comey, Trump lays bare his true intentions 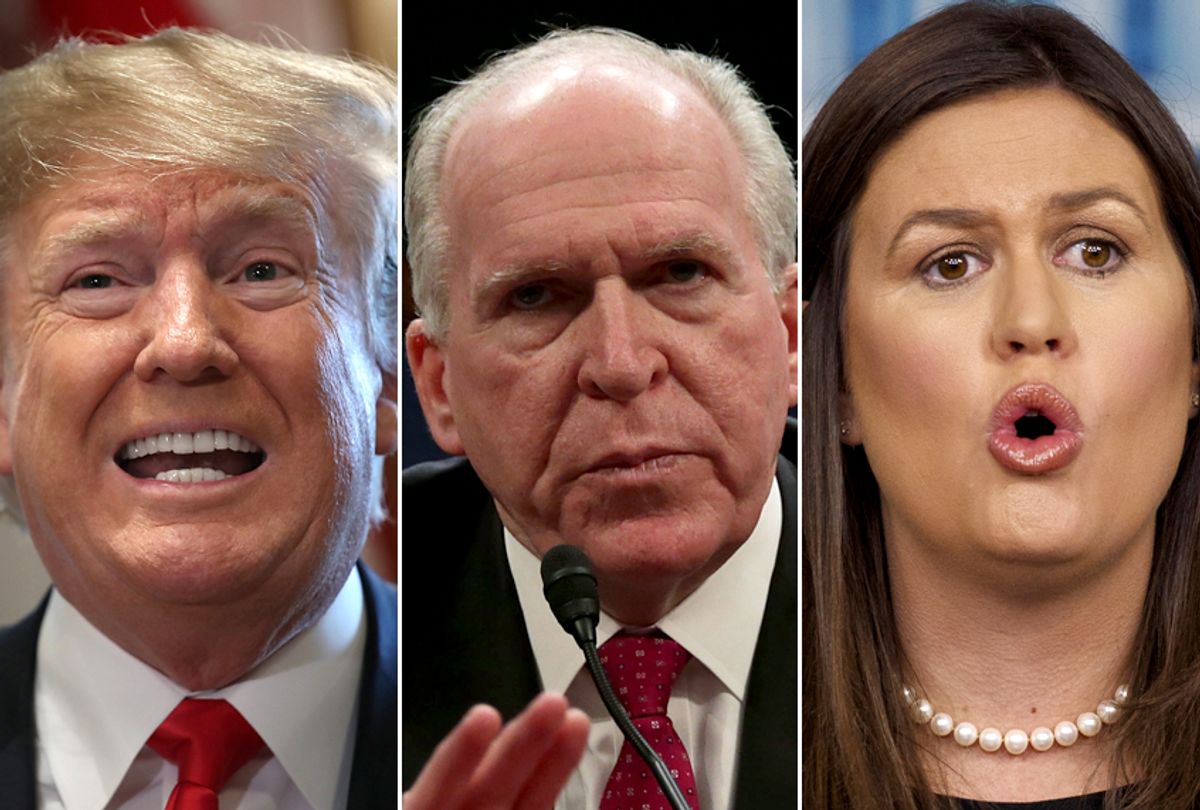 On Wednesday, President Donald Trump revoked the security clearance of former CIA Director John Brennan, openly admitting that he did so for political reasons.

"Mr. Brennan has a history that calls into question his objectivity and credibility," White House Press Secretary Sarah Huckabee Sanders told reporters on Wednesday, according to CBS News. She went on to list other public officials who have criticized the Trump administration in various ways and who she says are also under consideration for having their security clearances revoked. These included former Director of National Intelligence James Clapper, former FBI Director James Comey, former Deputy FBI Director Andrew McCabe, former National Security Adviser Susan Rice and former Acting Attorney General Sally Yates.

Sanders added, "More broadly, the issue of Mr. Brennan's security clearance raises larger questions about the practice of former officials maintaining access to our nation's most sensitive secrets long after their time in government has ended. Such access is particularly inappropriate when former officials have transitioned into highly partisan positions and seek to use real or perceived access to sensitive information to validate their political attacks."

Trump made his political motivations even more plainly clear in an interview with The Wall Street Journal on Wednesday:

Asked about the White House decision to yank Mr. Brennan’s security clearance and to evaluate the clearances held by others, Mr. Trump said was prepared to do it last week, but it was too “hectic.”

Mr. Trump said the Russia probe is unwarranted. “Of course they say it’s not an investigation. You know, in theory I’m not under investigation…I’m not a target. But regardless, I think that whole—I call it the rigged witch hunt, is a sham.”

Mr. Trump didn’t rule out testifying before Mr. Mueller, but he said the special counsel’s investigation has been “so badly discredited.”

The Mueller investigation last month indicted a dozen Russian intelligence officers and charged them with hacking the computers of Democratic organizations and ensuring the pilfered information became public.

Still, some of Trump's fellow Republicans are particularly exultant about the revocation of Brennan's security clearance.

"I applaud President Trump for his revoking of John Brennan’s security clearance," Sen. Rand Paul of Kentucky declared in a statement on Wednesday. "I urged the President to do this. I filibustered Brennan’s nomination to head the CIA in 2013, and his behavior in government and out of it demonstrate why he should not be allowed near classified information. He participated in a shredding of constitutional rights, lied to Congress, and has been monetizing and making partisan political use of his clearance since his departure."

Paul was backed up by Sen. John Kennedy of Louisiana, a fellow Republican, who argued on Wednesday that Brennan was a "butthead" who deserved to have his clearance revoked.

"I think most Americans look at our national intelligence experts as being above politics. Mr. Brennan has demonstrated that that's not the case. He's been totally political. I think I called him a 'butthead' and I meant it. I think he's given the national intelligence community a bad name," Kennedy told CNN on Wednesday.

Not all of Trump's fellow Republicans are happy with him, however.

As Politico reported on Wednesday, Sens. Susan Collins of Maine and Bob Corker of Tennessee expressed their concerns about the precedent that had been established by Trump revoking Brennan's security clearance.

"It’s unwise. Because generally, recently retired intelligence officials have a lot to contribute to the analysis that is being done," Collins told reporters.

"Without having some kind of tangible reasons for doing so, which there may be that I’m not aware of, I don’t like it at all. It just feels like sort of a … banana republic kind of thing," said Corker, the retiring Senate Foreign Relations Committee chairman, repeating the "banana republic" line two more times in an exasperated tone. "I don’t like it."

Brennan himself has not been cowed by Trump's punitive actions against him. In a Thursday op-ed in The New York Times, Brennan continued to call out the Trump administration for having colluded with Russia during the 2016 presidential election:

Mr. Trump’s claims of no collusion are, in a word, hogwash.

The only questions that remain are whether the collusion that took place constituted criminally liable conspiracy, whether obstruction of justice occurred to cover up any collusion or conspiracy, and how many members of “Trump Incorporated” attempted to defraud the government by laundering and concealing the movement of money into their pockets. A jury is about to deliberate bank and tax fraud charges against one of those people, Paul Manafort, Mr. Trump’s former campaign chairman. And the campaign’s former deputy chairman, Rick Gates, has pleaded guilty to financial fraud and lying to investigators.

Brennan also took to Twitter to denounce Trump's actions as a threat to his freedom of speech.

"This action is part of a broader effort by Mr. Trump to suppress freedom of speech & punish critics," Brennan wrote on Twitter. "It should gravely worry all Americans, including intelligence professionals, about the cost of speaking out. My principles are worth far more than clearances. I will not relent."

While the American Civil Liberties Union doesn't have a long record of supporting former CIA directors, their statement after Trump's revocation of Brennan's security clearance agreed with Brennan.

"The First Amendment does not permit the president to revoke security clearances to punish his critics," Ben Wizner, director of the American Civil Liberties Union’s Speech, Privacy, and Technology Project, said in the statement. "John Brennan’s record is full of grave missteps, and we have been unsparing in our criticism of his defense of the CIA torture program and his role in unlawful lethal strikes abroad. But Trump’s revocation of Brennan’s clearance, and his threats to revoke the clearances of other former officials for the sole reason that they have criticized his conduct and policies, amount to unconstitutional retaliation. They are also part of a broader pattern of seeking to silence or marginalize critics, which includes forcing staff to sign unconstitutional non-disclosure agreements."

Ironically enough, Trump himself has engaged in actions that could warrant questioning whether he should be trusted with American national security secrets. Most notably, he revealed highly classified information to the Russian foreign minister and ambassador during a meeting with them in May 2017, according to The Washington Post.

SalonTV exclusive: Clapper reveals US is still paying for Snowden