Salon talks to the actor about parents, kids, dancing and working with kids who aren't trained actors 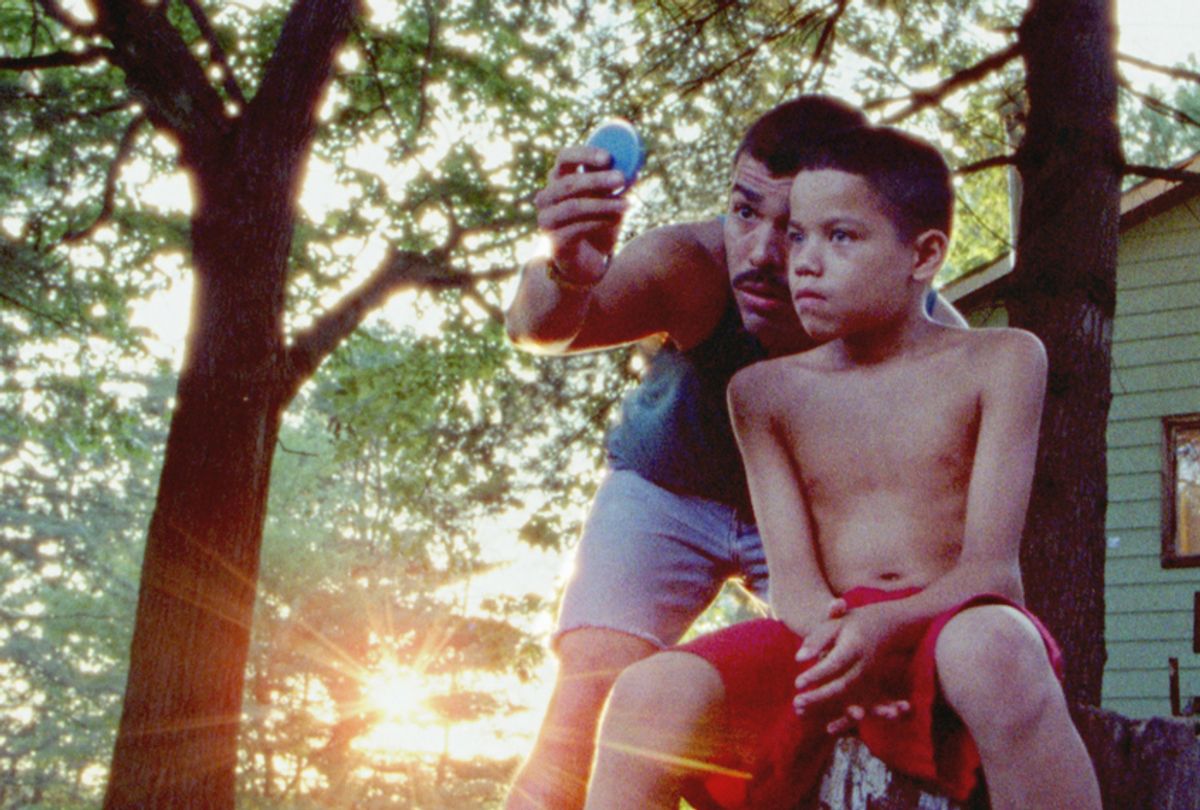 Raúl Castillo and Evan Rosado in "We the Animals" (The Orchard)
--

The magnetic actor Raúl Castillo gets a juicy starring role as Paps, the young father of three young boys, in Jeremiah Zagar’s sensational adaptation of Justin Torres’ novel, “We the Animals.” This fabulous (and fabulist) drama presents episodes from the childhoods of Jonah (Evan Rosado), Manny (Isaiah Kristian), and Joel (Josiah Gabriel), growing up in a family that ekes out their living in Utica, New York. The kids fight, play, and bond finding adventure and escape as their emotionally and financially unstable parents (Castillo and Sheila Vand), respectively work a third-shift security job and in a factory. Paps and Ma also fight—as when he buys a big truck for the family car—and play and bond as they struggle to make ends meet which causes everyone in the family stress. But the parents do express their affection for one another and their sons. However, Jonah soon behaves in ways that test his parents’ and his brothers’ love.

Castillo is extremely expressive in the film, and he makes viewers feel Paps’ every mood swing. His character is full of macho rage at times, and he feels palpable despair as the world slowly and brutally crushes him. But he also has a few brief moments of pleasure, showing his kids how to dance, or cuddling with his wife as his sons spy on him from behind a shower curtain. His performance is subtly calibrated to wring maximum emotion—and it does. Castillo understands that Paps is a man who dreams, futilely, of getting out of the bad situation he finds himself in—having three kids too young, and letting his temper get him in trouble with both his wife and his boss. He is a man who screws up but begs for sympathy and uses his charms to convince everyone he deserves a second chance.

Castillo is absolutely charismatic in the role and in person. The actor met with Salon to talk about his family, Paps, and “We the Animals.”

The film is a real ode to childhood, the freedom of playing and being fearless. What were you like as a child?

I was creatively inclined from a very early age. I’m a middle child, and you learn to entertain yourself sometimes as a middle kid. I drew a lot, and I wrote quite a bit as a young boy. I had a lot of journals like Jonah [in the film].

No, no. It was before I even had thoughts that were embarrassing. It was silly and primitive. Then music became more of a creative outlet, but I identified more with keeping journals.

Was it an escape for you? Was it that you weren’t into sports and had to express your energy somehow?

I definitely was not into sports. I was more of an introvert. I’d rather play inside. Evan, the actor who plays Jonah is like this. If he had a choice between playing inside or outside, he’d rather play inside. It wasn’t altogether that rare to find me in my room, playing, and getting lost in these imaginary worlds. I found that stimulating and interesting. I was into creating imaginary circumstances that have served me well now that I’m an actor. It’s the same kind of muscle.

Can you talk about your relationship with your siblings?

I have an older brother and we’re close in age, and I have a younger sister and we’re very close, but the three of us are also fiercely independent. Music became an outlet for my brother, and I think I wanted to emulate what my brother was doing, so I think I identify with Jonah’s character—that he looks up to his brothers; you only know how to express yourself in a language that you are being taught by your older sibling. I took to music. My brother was playing guitar, and I knew that I would never be as good a guitar player—he was so great already—that I took to bass. I wanted to emulate him, but I knew I couldn’t quite live up to it.

What observations do you have about the film’s family dynamics?

Families can be such composites of the two individuals that come together to form them. Their DNA becomes an intrinsic part of the family. Paps’ Puerto Rican heritage is so much at the forefront of who he is as an individual. Because the novel is so much about identity, and what it is to be a person existing within a family and coming to a place where you recognize your own individual identity outside of your family. [Jonas’] relationship to his father is so integral to who he is as a person—it’s part of his DNA as his character and as a human being. Paps is so influential. He can be harsh and abusive at times, but he can be quite loving.

The film has a real loose, almost improvisational feel to it. What can you say about creating the bonds of your on-screen family?

I think Jeremiah, being a documentarian, didn’t have the some of the constraints that narrative filmmakers have at times, because they have to think about budget. They are so weighted down by the constrictions of filmmaking, that they forget to just be free and be playful, which sometimes creates the best art. Jeremiah did things unconventionally. He was intent on casting non-actors as the kids. We worked together for months before we went up to Utica to shoot, and that created a chemistry and a rapport among the five of us as a family. When we got to set, the way we all lived and worked together in that house and in Utica, and the way that the crew came together, there was a symbiosis that started to occur. We were all living in this dorm-style situation, the kids were becoming comfortable with everyone and being on set with cameras, tape measures, and marks, so they learned the language of making the film. When we shot, me standing around in an underwear and a robe was nothing out of the ordinary. It made me feel like being with my father in his tighty-whiteys. There was a familiarity with me and Sheila [Vand] that they had developed by that point.

Paps tries to be a good husband and father, but his rage often gets the best of him. He’s loving, but hard to love. He is angry but also resigned. What did you discover about his character?

When I first picked up the script, I wasn’t familiar with the novel. I used to pride myself on knowing new Latino writers, but I don’t read as much as I used to. I started reading the script and I was bumping up against the character and what I thought at first were stereotypical moments. The world was so original and the way the script read, it was loyal to the novel. It pays homage to it. I was perplexed by it. It was too rich. I saw it was based on the novel, so I read all about Justin [Torres, the author] and the success the novel had, and the criticism to get an idea of what the world was.

Paps was a character who does these terrible things, but I felt the story was told with a lot of love. I was drawn to this kind of raw, honest portrayal of these individuals with all these flaws and charms thrown in there. Justin’s rendition of these fictional versions of his own parents were told with so much love.

Paps is mad at the world. What does his tattoo say? "Mala…"

Mala Crianza, bad breeding. It’s not my real tattoo. The story is about these two young people who met each other at this volatile, unstable moment in their lives and they are parents before they are old enough to really have the tools to be parents. This is something that I had to come to terms with in my own family. I think your parents are only trying the best they can with the tools that they’ve been given, and if you examine those tools, you can have a little bit more compassion for them, because you can understand where they are coming from and that they are just trying their best. Justin is sensitive to that.

Paps is full of despair, and a scene of him near tears is heartbreaking. How did you tap into the character’s anguish?

I think we’ve all been in places in our lives where we feel it’s never going to get better. I’m in a great place now as an actor, and I’m really lucky to have great projects to work on now. I’ve been at that point. I don’t have kids, but I have been at that point where I’ve wanted to walk away from it all. The despair is overwhelming and the goals you had are completely out of reach and like you’re never going to get there.

Certainly, being a brown man in a mostly white industry, I’ve understood a little bit of the hopelessness of it at times. Sometimes it does feel like this isn’t meant for you?

How do you cope with hopelessness? Do you give into it, does it make you stronger? Do you let it fester, or say, “Fuck it!”?

I think at the end of the day it had to make me stronger. I had to learn that there are things that I can change and thing that I can’t. And I had to learn to let go. That’s a lesson in acting as well. When I was looking at my craft and looking at the industry and understanding that those are two different things I have to learn and respect. I can have sense of control over my craft, the industry is something else, something bigger than me.

There is also a fun scene of you dancing in the kitchen and teaching your kids how to move. Are you a good dancer?

I’m a wedding dancer. I’ll dance if it’s going on. I do enjoy dancing. If I have a good partner, I have a great time. I love salsa, and Latin music. Cumbia…South Texas, where I grew up was Cumbia country.

I recall from the last time we chatted—about the short film “Limbo”—that you are a playwright. Can we talk about your need to be creative and expressive?

I think at this point, I’m exploring narrative ideas I’ve had to see how to find a home for them now that I have friends both in the feature and series world. But I think the work of the writer is so private and solitary. My favorite part of playwriting was always getting in the room with the actors and the director because writing is so lonely. I really like being on set. That’s the best time for me. I think that is why acting has taken on more of a forefront. The solitary nature of writing sometimes can be overwhelming.

Jerry O'Connell on "Stand By Me"

Salon talks to the former child star about his iconic role