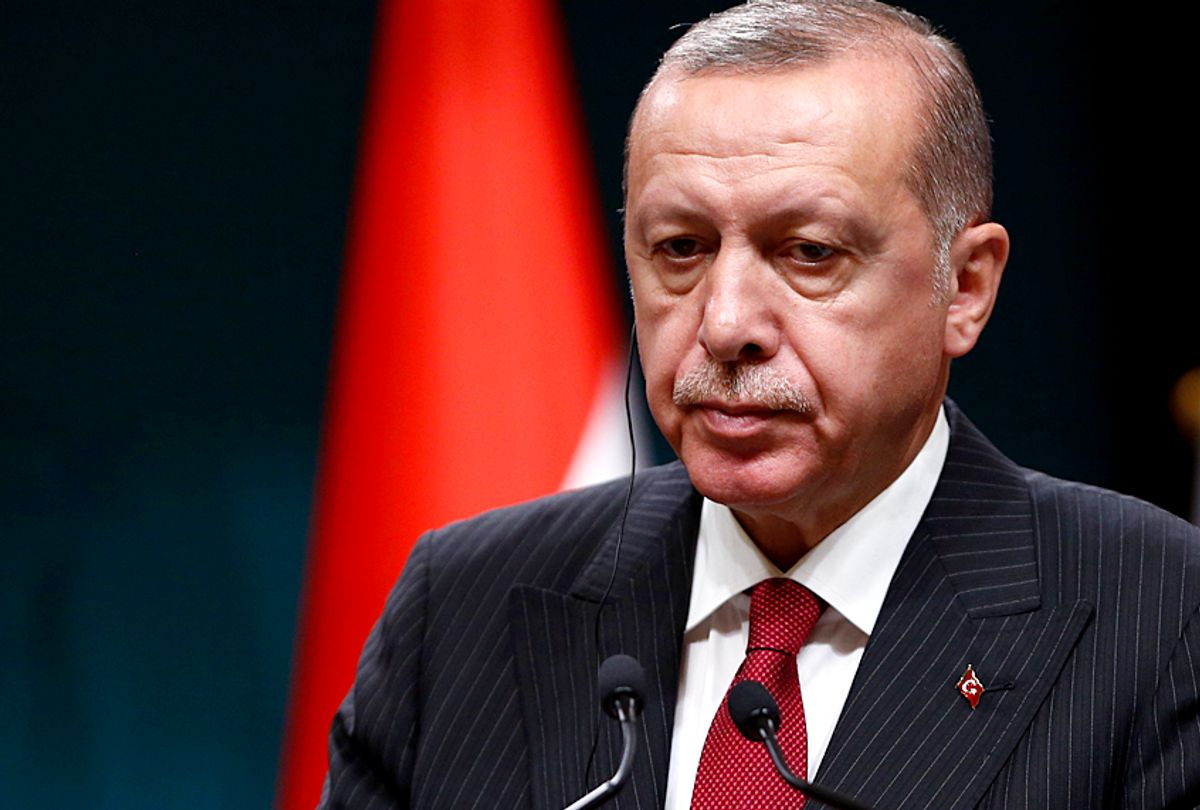 Talk about shadow self. President Donald Trump and Turkish President Recep Tayyip Erdogan are two terminal narcissists who both very much need the distraction that comes from having an external arch nemesis to rail against.

For Trump, it means being able to tweet about something not related to Bob Mueller, and for Erdogan it gives him a scapegoat for a floundering economy on the verge of a meltdown of global significance.
READ MORE: The end really is near: a play-by-play of the coming economic collapse
But the Punch and Judy Show between the two men that’s dominating the news obscures the reality that what is happening in the Turkish economy illustrates what happens when income and wealth inequality are left unaddressed by the powers that be and you build a phony economic boom on borrowed foreign money.

Stir in the neo-liberal capitalist system’s addiction to speculation and you have the bust boom bust cycle that generates lots of human misery along the way. These market and currency gyrations, that a tiny handful of people and institutions make a killing on, can undermine civil society and have broader geopolitical consequences. The folks at the bottom just keep getting pummeled and the middle class shrinks as the super rich get even richer.

And every new crisis is really the same thing, just rinse and repeat.

Is there a Turkey contagion? Emerging market currencies are already feeling an impact. No doubt, wherever there’s been over building of luxury housing in places where poverty is on the increase and wages don’t keep up, there will be socio-economic consequences as the bill comes due.

In 2017 Turkey experienced a 28 percent increase in armed violence committed by individuals. The aftershocks from the 2016 failed military coup continue with 160,000 people still in prison as the Erdogan crackdown and consolidation of power continues.

Things have been deteriorating in Turkey for awhile with a ballooning trade deficit that it financed with so-called international "hot money." But the country's widening wealth inequality and growing poverty were papered over by years of artificially low interest rates courtesy of our Federal Reserve.

With the influx of easy credit there was a sense of forward motion manifested by towering cranes pulling Turkey’s skyline ever upward. But as Martein Khalid wrote in Khaleej Times back in April “50 per cent of new houses built in Istanbul have been designated for investment, not for owners to live in. I avoid investing in any property market that is dependent on foreign money, not local demand, as it is invariably prone to speculative boom-bust cycles.”

“From 2007 to 2015, Turkey’s real wealth in 2003 Turkish Lira prices decreased by 32 percent,” according to Yasemin Satır Çilingir, a policy analyst at the Economic Policy Research Foundation of Turkey. “You may wonder how wealth in Turkey has been diminishing in spite of the real estate boom. Here is the catch: one-third of all house sales in Turkey during 2015 were via mortgages. From 2011 to 2015, the number of people who could not pay their personal loans and credit card payments increased by 74 percent and 49 percent, respectively. Hence, personal debts increasingly counterbalance the volume of both financial and non-financial wealth in Turkey.”

The analysis continues, “Although the wealth growth trends are similar in all groups, in 2014, the wealth per adult for only the top percentile was higher than its 2008 level. This means that in Turkey, so far, only the top percentile was able to recover from the global crisis. As a result, the vulnerable and the poor disproportionately bear the burden of diminishing wealth. Hence, the result is double trouble; less wealth overall coupled with more inequitable wealth distribution.”

And on the sidelines sit the country’s children. In Turkey 38 percent of the children live in extreme poverty and suffer from “severe material deprivation” according to a recently released report from Bahcesehir University Center for Economic and Social Research. That translates into more than 7.5 million children, an increase of 300,000 from 2015.

Richard Wolff, an economics professor at the New School University summed it up, writing in an email “Turkish industrialists and real estate hustlers borrow billions at short term very low interest to make risky investments in Istanbul real estate” and “for a while these investments support one another leading to ever-more borrowing” and things just roll along until they don’t and the wheels come off.

Does any of this sound vaguely familiar?