A rundown of all the ways Trump is overseeing an all out, under-the-radar attack on workers 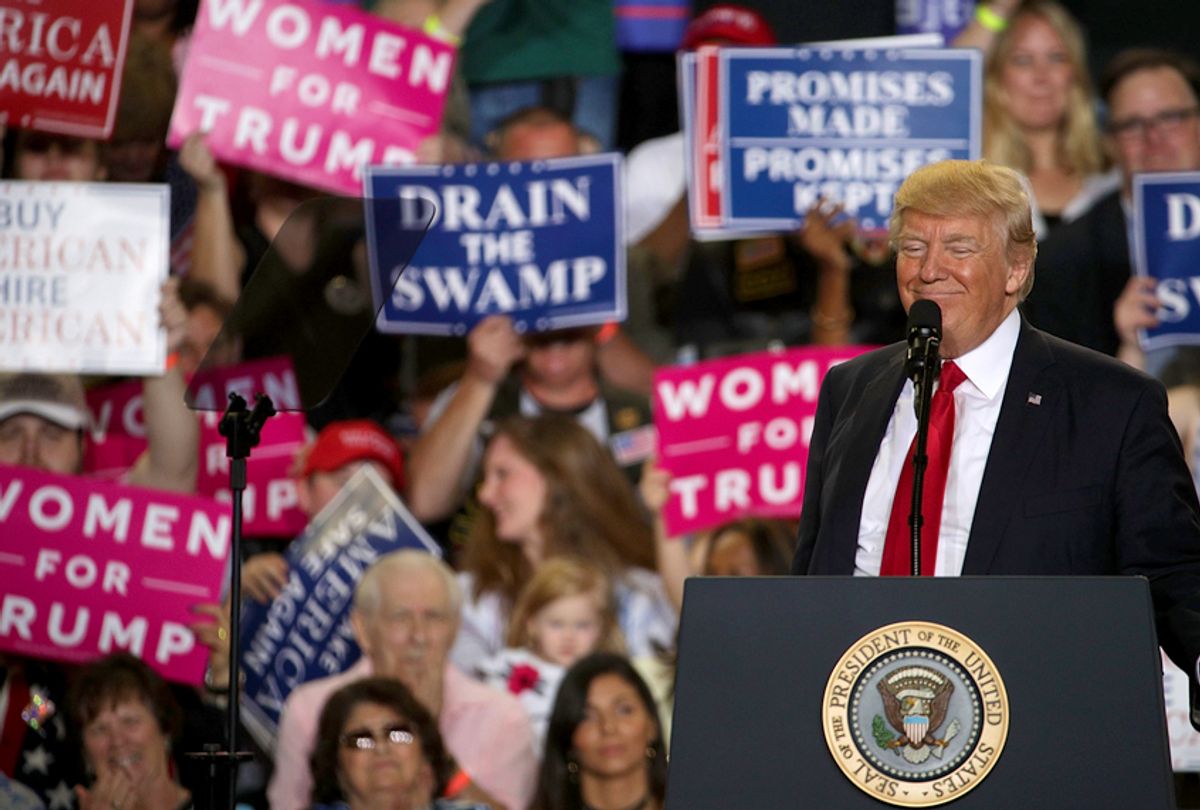 During his presidential campaign, Donald Trump repeatedly proclaimed that he would help workers. He even boasted, “I have great relationships with unions.” But actions speak louder than words, and the policies pursued by the Trump administration have directly targeted middle and lower-income workers and labor unions.

The anti-labor attack gained momentum in the last weeks of 2017. President Trump had to wait until his two nominees to the five-member National Labor Relations Board (NLRB) were confirmed. Those new members flipped the board’s majority from Democratic to Republican. The NLRB, which oversees collective bargaining law and enforcement of U.S. labor laws and standards, then quickly issued a slew of key decisions that rolled back a number of worker- and union-related reforms.

In one of the most important changes, the NLRB reversed a 2011 ruling that helped workers form smaller unions within a single workplace. The precedent set under Obama allowed the holding of a union election without including all the different types of jobs within that business that don’t share similar job duties, wages and working conditions. Employers complained that it led to “micro unions.” In a specific case, after 100 welders unionized at a large manufacturing plant, the NLRB ruled that the smaller organizing unit was illegitimate since any union election would have to include all 2,500 workers at the company, spanning 120 job classifications. The NLRB ruled 3-2 along partisan lines.

Another consequential case decided under Trump will hurt low-income fast food workers. The Trump board overturned a major 2015 decision that ruled employers are responsible for bargaining with workers, even if they have only indirect control over those workers’ employment. Fast-food companies like McDonald’s license smaller franchise businesses to run most of their restaurants. McDonald’s instructs these franchises on how to operate but leaves them to control many aspects of their day-to-day business. For decades, franchise employees who wished to bargain collectively were caught in a vicious trap. Their boss, the franchise operator, could insist that McDonald’s controlled the terms of their employment. But if they tried to bargain with McDonald’s, the company would insist that the franchise operator was their true employer.

Obama’s NLRB solved this problem by clarifying that companies like McDonald’s are, jointly with franchise operators, employers of these workers and can be forced to the bargaining table. This new standard permitted much more meaningful collective bargaining among millions of low-wage workers. Longer term, that ruling on joint employers would have dramatically improved collective bargaining rights in the fast-food industry. But the GOP majority on the NLRB scrapped this standard, returning to an old, stringent policy that requires employers to exercise “immediate and direct” control in order to be liable under labor law.

Other damaging decisions by Trump’s NLRB include:

All of these were 3–2 decisions, with Republicans in the majority and Democrats dissenting.

But the NLRB is only one federal agency. Trump’s Labor Department has also rolled back several rules and executive orders that the Obama administration issued to protect workers. Those include the Fair Pay and Safe Workplaces rule, which required companies bidding for large federal contracts to disclose and correct past labor and safety violations. Another rescinded rule had established guidelines for when states can drug-test applicants for unemployment insurance benefits. Also rescinded was the "persuader rule," which required law firms to publicly disclose any work they do for employers trying to fight against union organization efforts.

Meanwhile, the Occupational Safety and Health Administration (OSHA) has delayed three workplace safety rules issued during the last year of Obama's presidency. Those rules required certain employers to submit injury and illness data electronically to OSHA for publication on the agency's website; tightened exposure standards for silica dust, which is often breathed in by certain construction workers and linked to lung disease; and weakened workplace exposure limits for beryllium, an industrial mineral linked to lung cancer.

The Supreme Court also ruled to allow employers to require workers to sign arbitration agreements that waive their rights to file class or collective action lawsuits. Last June, Trump's acting solicitor general filed a brief with the Court that took the opposite stance from the Obama administration, asserting that mandatory arbitration agreements do not violate the National Labor Relations Act and are enforceable under the Federal Arbitration Act.

Another important ruling made under the Obama administration regarded which workers were eligible to receive overtime pay. The Obama-era rules required nearly everyone paid less than $47,476 a year to be eligible for time-and-a-half overtime pay when they worked more than 40 hours a week. That was a big jump from the $23,660 threshold in place since 2004, and a cornerstone of the Obama administration's efforts to lift wages. But a federal judge in Texas blocked that rule a week before it was scheduled to take effect, and Obama's Labor Department appealed. However, Trump's Labor Department filed a brief in federal appellate court indicating it will not advocate for these overtime changes.

In addition to all that, the Trump administration has proposed $2.6 billion in budget cuts—an enormous 21 percent—to the Department of Labor. Those cuts include a proposed elimination of four department programs and their services, such as training for worker-safety and for migrant farmworkers. The budget also seeks to significantly slash funding for Job Corps, a program that provides job training to disadvantaged youth, by $407 million, or 24 percent. Dimitri Iglitzin, a labor attorney in Seattle, says that “Of all of the ways that the Trump administration has been crushing labor, the most important has been the neutering of the Department of Labor. On a day-to-day basis, the agency that should be fighting for working people is doing so no longer.”

Typically, when the U.S. government shifts from a Democratic presidential administration to a Republican one, a certain level of pro-business policies and erosion of labor rights is expected. However, many labor experts say that the presidency of Donald Trump has led to a repeal of Obama administration regulations that is unprecedented, and is proceeding faster than is typical under a new GOP administration. Celine McNicholas, labor counsel at the Economic Policy Institute in Washington D.C., says the Trump rollbacks of various pro-labor rules and regulations, in addition to deep cuts to the Labor Department's budget, have been devastating to U.S. workers and “are not business as usual.”

In just over a year and a half as president, Donald Trump has wiped away a number of the modest policy gains that organized labor made during the Obama years. The nominees he chose to fill crucial regulatory roles already are making it more difficult for workers. Taken together, this blizzard of decisions will hurt millions of workers and weaken their abilities to unionize and bargain collectively.

But it does not have to be like this. Germany, Sweden and other EU member states show another path that is better for workers and that creates a stronger relationship between businesses, employees and trade unions.

Countries like Germany and Sweden have stronger labor laws than in the United States, and consequently more influential trade unions. In addition, many EU member states benefit from what is known as “co-determination,” which includes works councils at every job site and worker-elected boards of directors for the biggest of businesses, including Fortune 500 companies. Imagine if Walmart and Amazon were legally required to allow its workers to elect up to 50% of the members of its board of directors? It’s unimaginable to most Americans, yet this is standard practice throughout Europe. Co-determination fosters a “culture of consultation” and a degree of economic democracy. As a result, there is more broadly shared prosperity, with social supports like universal health care, child care, affordable university education, affordable housing, job training/re-skilling, workplace protections, a decent retirement and more.

In an age of growing inequality, the European practice of co-determination has broken with a strictly “shareholder model,” and has set a standard for corporate governance that holds great potential for the digital age if used in a widespread fashion.

Labor attorney Thomas Geoghegan has proposed that U.S. states should try out codetermination. Geoghegan says states should offer tax breaks to companies that allow rank-and-file employees to elect a third to a half of its corporate board of directors. Doing so, says Geoghegan, would allow U.S. companies to test drive an alternative model to the current dysfunctional stockholder model. Also, states could try out this model by requiring that nonprofits, NGOs and universities allow their employees to elect a portion of its board of directors or trustees.

Three senators (Democrats Tammy Baldwin, Elizabeth Warren and Brian Schatz) have introduced legislation that would require that companies allow workers to elect one-third of their corporate board. The bill is not expected to pass, and while the AFL-CIO has endorsed this legislation, historically unions and labor advocates have not taken up this cause. Yet labor leaders don’t seem to have any other proposals that might stop the hemorrhaging of union members.

Certainly such progressive proposals are going nowhere at the federal level under the administration of Donald Trump. So the landscape for political change has shifted to states and to cities where Democrats and progressives are more dominant. Still, even when Democrats have been in control, whether at the federal level under President Obama or in heavily Democratic states like California, Maryland and Massachusetts, there has been little appetite to push the boundaries of ways to support labor unions or progressive labor reform.

Which is surprising, since the unionization rate in the United States has fallen to fewer than 7 percent in the private sector and 11 percent of all workers. And future prospects don’t look too bright.

In an age when many workers are becoming freelancers and contractors who supposedly are the “CEOs of their own business” (whether driving for Uber, or being a hotelier for Airbnb, or a freelancer for Upwork and dozens of other online platform companies), the fate of labor unions hasn’t been this threatened in nearly a century. The Trump administration is just the latest nail in a slowly closing coffin that has been in process for decades. It’s time for U.S. labor unions to try new tactics.