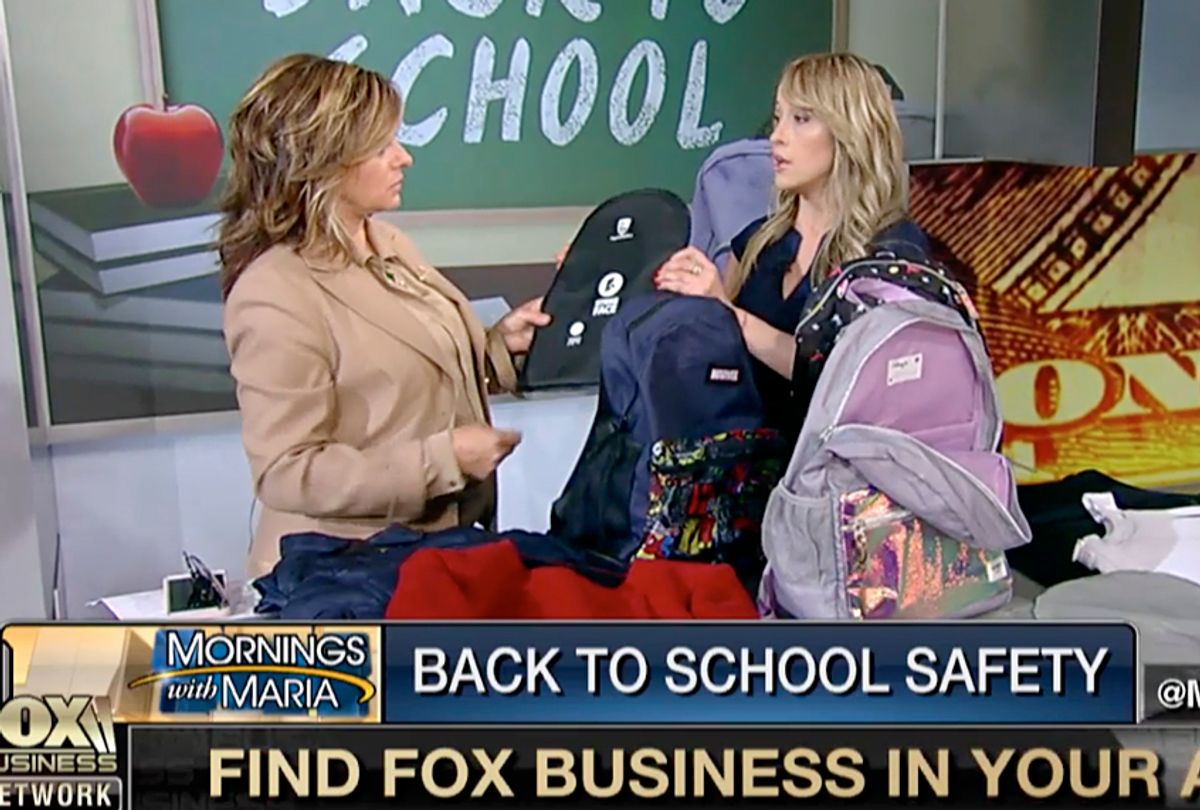 During a "Back to School" special on Fox Business Network Monday morning, the network blasted the 2009 dance hit "Bulletproof" by La Roux to introduce a segment on "high-end bulletproof backpacks" and clothing.

"It's fashion with ballistics," Ballesteros Casas explained with a smile as the song faded out over the segment.

"In the U.S., sadly, there's the guns, everybody can have a gun," she continued. "So, here, kids need to be protected, and we have the fact that there is some school issues, so we need to bring this to the United States."

The Fox Business host barely stopped to reflect on America's epidemic of deadly gun violence, uttering simply that "It's incredible that this has come to this though, that we need bulletproof clothing." Immediately after, Bartiromo complimented the company's products, saying, "Some of these things are quite fashion forward."

According to a FOX Business Network spokesperson, "The song was chosen by the production team and the selection has been addressed."

In response to the Fox Business segment, La Roux told NME, a British music publication, "Using 'Bulletproof', a song I wrote about relationships, for a piece like this is abhorrent. I have never, and would never  approve my music to be used in this way."

More than 9,000 people in the United States have died because of gun-related incidents in 2018, according to the Gun Violence Archive. The organization gathers local reports on gun-related violence and thus may underrepresent the true number of deaths.

Following a Valentine's Day shooting in Parkland, Florida — which left 14 students and three faculty members dead — students were given see-through backpacks, reminiscent of security measures at some professional sports stadiums and music venues. While the backpacks aren't bulletproof, they're an example of "band-aid" fixes students across the country are being met with, despite their demands for legitimate legislative change when it comes to gun violence in America.

At the time, junior Dylan Bowerman told Salon,  "I recognize the fact that backpacks can increase safety, and I think there is an increase in safety because of their implementation, but I don't think it's enough of an increase to be worth it."

"The backpacks don't look nice. They're not as big as the backpack I used to have," he added. "It's hard to put things in it. There aren't many pockets for me to store [extra school supplies]."

While Bowerman said the clear bag initiative makes him feel safer at school, as it removes "one hiding option" for concealing a firearm, he questioned the effectiveness of the measure, saying "it still leaves a lot of other ones, like in a jacket pocket, or if they're really dedicated, in a lunch bag looking object or binder."