How the gun control debate has changed since Parkland 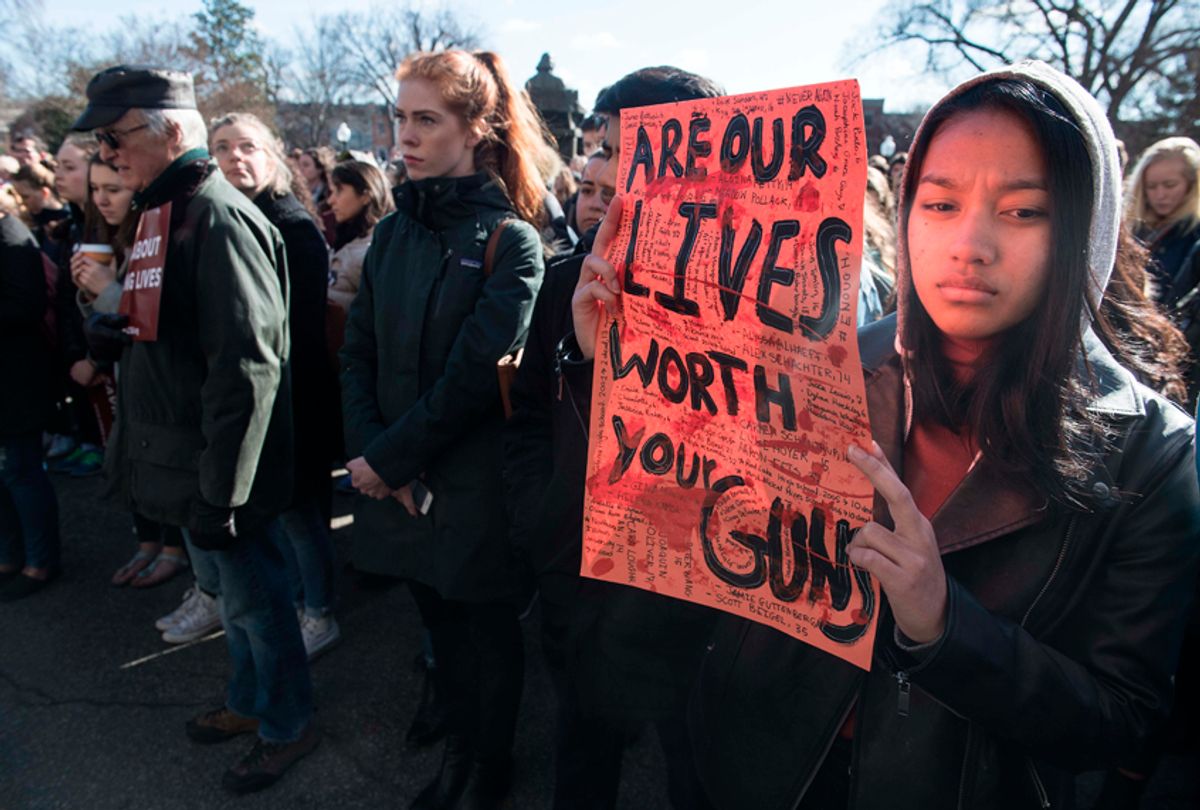 A student holds a sign at Georgetown University on March 14, 2018 during a national walkout to protest gun violence, one month after the school shooting in Parkland, Florida. (Getty Images)
--

They demanded government action on gun control, but got new backpacks instead.

Survivors of the school shooting in Parkland, Florida, returned to school last week from spring break with new security measures, which some students said made them feel like prisoners.

Marjory Stoneman Douglas High school students were also met by extra fences and security barriers as they got to campus – a reminder of how much has changed since a former student opened fire at the school six weeks ago, killing 14 students and three faculty members, junior Dylan Bowerman told Salon.

During second period, administrators distributed the students' newest mandatory accessory: a see-through backpack, reminiscent of security measures at some professional sports stadiums and music venues. Students are also now required to wear an identification badge at all times, Bowerman said.

"I recognize the fact that backpacks can increase safety, and I think there is an increase in safety because of their implementation," Bowerman said. "But I don't think it's enough of an increase to be worth it."

"The backpacks don't look nice. They're not as big as the backpack I used to have," he continued. "It's hard to put things in it. There aren't many pockets for me to store [extra school supplies]."

While Bowerman said the clear bag initiative makes him feel safer at school, as it removes "one hiding option" for concealing a firearm, he questioned the effectiveness of the measure, saying "it still leaves a lot of other ones, like in a jacket pocket, or if they're really dedicated, in a lunch bag looking object or binder."

Samantha Deitsch, a freshman, called the new initiative "unnecessary" in an interview with Salon. Deitsch pointed out that since the Feb. 14 shooting, the gunman's brother was arrested for trespassing and two students at Marjory Stoneman Douglas High school had been charged with carrying knives on campus.

"I think they're just trying to do that so it looks like they're taking safety steps. I don't think it helps anything," she said. "If you look back to just the week before spring break, when two kids had knives at Douglas, one girl hid it in her bra – it wasn't even in her bag. If someone was going to bring something they weren't supposed to to school, they would have it hidden anyway. They would still be able to put a knife in a folder, in their sleeve – anything."

Response to the security measure has been mixed, with many students feeling that the transparent bags go too far, infringing on their right to privacy, yet not far enough to be an effective security measure. Others pointed out the logistical challenges of checking more than 3,000 bags.

"These clear backpacks accomplish absolutely nothing," junior Kyrah Simon tweeted. "Not every item placed in the bag is visible, and there is no possible way to monitor the contents of over 3,000 backpacks. It's great to know that this is where my community puts its resources."

Tarr and other students attached the $1.05 tag to their bags to protest politicians, including Sen. Marco Rubio, who accept money from the National Rifle Association by putting a price on each student.

In addition to displaying the orange tag, senior Carmen Lo customized her backpack with a sign that read: "This backpack is probably worth more than my life."

Robert Runcie, the superintendent of Broward County Public Schools, announced the new security initiative just days before student survivors were set to lead a worldwide march for gun control under the rallying cry "March For Our Lives." The demonstration drew more than 800,000 people to the nation's capital and inspired a wave of student and teacher activism. One day after the march, students in Wisconsin decided they weren't done marching and embarked on a four-day, 50-mile crusade from Madison to Janesville, the home town of House Speaker Paul Ryan, to call for stricter gun control legislation.

After Parkland, a Pennsylvania school district took a different approach to ward off intruders: rocks. Blue Mountain School District superintendent David Helsel explained, "every classroom has been equipped with a five-gallon bucket of riverstone. If an armed intruder attempts to gain entrance into any of our classrooms, they will be stoned," during testimony before the state's House Education Committee.

Despite their demands for legitimate legislative change, students across the country are being met with "band-aid" fixes.

Since Parkland, more than 80 teens have been killed by gun-related violence

At least 86 teens in the U.S. have been killed by gun-related violence in the 50 days since the shooting in Parkland, according to an analysis by The Intercept. The number was determined by reviewing data from the Gun Violence Archive, which gathers local reports on gun-related violence and thus may underrepresent the true number of deaths, The Intercept's Clark Mindock noted.

"The 86 number shows that, on average, one-and-a-half teenagers were killed each day from the morning of Feb. 14 through April 15, the 50 day mark," Mindock wrote. "Just 14 days saw no reported teenager gun deaths, while 24 days saw two or more deaths and 12 days saw one death."

The figures detail accidental discharges, domestic violence, robberies gone wrong and a number of other events. Mindock pointed out that, while the data "appears random in its geography and class affected," it is "chillingly predictable in volume year after year."

The dead paint a harrowing image of the everyday victims of the gun violence epidemic that threatens America's youth. They tell the stories of the children whose names you may not have heard, but are the ones many of the Parkland students are drawing attention to.

While taking the stage in front of hundreds of thousands at March for Our Lives, Parkland students checked their privilege and included victims of gun violence from across other communities.

"We've seen again and again the media focus on school shootings and oftentimes be biased toward white, privileged students," David Hogg, one of the most visible Parkland survivors, said at the March For Our Lives rally in Washington. "Many of these communities are disproportionately affected by gun violence, but they don't get the same share of media attention that we do."

"We recognize that Parkland received more attention because of its affluence," she said during her speech at the demonstration. "But we share this stage today and forever with those communities who have always stared down the barrel of a gun."

Alex Wind, a junior at Douglas, emphasized that gun violence affects everyone in the U.S. during his speech at March for Our Lives.

"Yes, I am a Parkland survivor and an MSD student," she said. "But, before this, I was a regular black girl. And, after this, I am still black. And I am still regular, and I will fight for all of us."

Naomi Wadler, an elementary school student from Virginia, said she was speaking on behalf of all of the "African-American girls whose stories don't make the front page of every newspaper."

"I represent the African-American women who are victims of gun violence," Wadler said. "Who are simply statistics instead of vibrant, beautiful girls full of potential."

Survivors of the Parkland shooting and other young activists of #NeverAgain have made it clear that they intend to build a movement that's multiracial and inclusive and tackles gun violence everywhere – not just in affluent communities and suburban schools.

"[The #NeverAgain teens] are trying to eliminate one of the central paradoxes of our gun-control debates," George Zornick wrote in The Nation. "While a disproportionate number of the victims of gun violence are black, most mainstream advocacy is conducted by white people, and the subjects of race and racial inequality have, for the most part, gone unbroached."

Hannah Shearer, the Second Amendment Litigation Director for the Giffords Law Center to Prevent Gun Violence, praised the student activism that has come out of Parkland, including efforts to lead an inclusive movement. Similar to the students, Shearer also highlighted flaws in America's gun control conversation.

"There's a tendency of people to focus on high-profile mass shootings, because those are the types of shootings that are most terrifying to people," Shearer told Salon. "But there really is a much bigger problem of everyday gun violence, especially in America's cities."

While gun suicides and homicides are two of the major causes of gun death in America, Shearer noted they are often overlooked in the focus on mass shootings. In 2016, nearly 60 percent  of gun deaths were suicides and 37 percent were homicides. The majority of homicides can be linked to urban gun violence and domestic gun violence.

While the situation is dire, it's not hopeless, Shearer suggested.

"There is progress," she said. "There has been meaningful progress in the states that often gets overlooked in the conversation about what has happened since Sandy Hook." Shearer pointed to the hundreds of gun safety laws that have been passed since the 2012 shooting in Newtown, Connecticut, which left 26 people, including 20 children, dead after a 20-year-old opened fire.

Indeed, in the shock and outrage that followed Newtown, a number of gun control advocacy groups vowing to fight for stronger gun safety measures sprang into existence. But five years after the tragedy in Newtown, the number of kids who have been killed by a bullet, especially at school, has only risen, according to data from the Gun Violence Archive analyzed by Salon.

The vast majority of changes to gun legislation in the U.S.have taken place outside of Washington at the state and local levels.

In response to the Valentine's Day shooting, Every Town for Gun Safety reports that 22 state legislatures and the District of Columbia are considering "red flag laws," which allow law enforcement to take guns away from those deemed a danger to themselves or others. California, Connecticut, Oregon, Indiana and Washington already had red flag laws in place, and Florida and Rhode Island recently passed similar measures. Oregon and Washington strengthened their gun control laws after Parkland, and bills are currently pending in states including Illinois, Texas and Pennsylvania.

That is in addition to the school safety bill passed in the U.S. House of Representatives on March 14, exactly one month after the Florida school shooting and the day on which thousands of students across the country staged walkouts to protest gun violence and to demand legislative action from Congress. The "Students, Teachers, and Officers Preventing (STOP) School Violence Act of 2018" would authorize grants to train students, law enforcement and teachers to identify the signs of school violence before it occurs.

The bill passed by the House does not include provisions to arm teachers, which President Donald Trump has called for.

A similar bill has been introduced in the Senate and is still being considered.

Utah Sen. Orrin Hatch, who helped introduce the Senate version of the bill, praised the House passage but tweeted, "Now let's pass it in the Senate!"

Should the Senate pass the bill, it would be the first major federal legislation since "The NICS Improvement Amendments Act of 2007," which was passed in the wake of the Virginia Tech shooting, to address loopholes in state record keeping that allowed dangerous people to obtain a gun.

While it's still unclear if this legislation will ultimately pass in the Senate – and if the White House will take tangible action on preventing more bloodshed – the number of children dying at the hands of gun violence is increasing, and the Parkland kids are calling "BS."