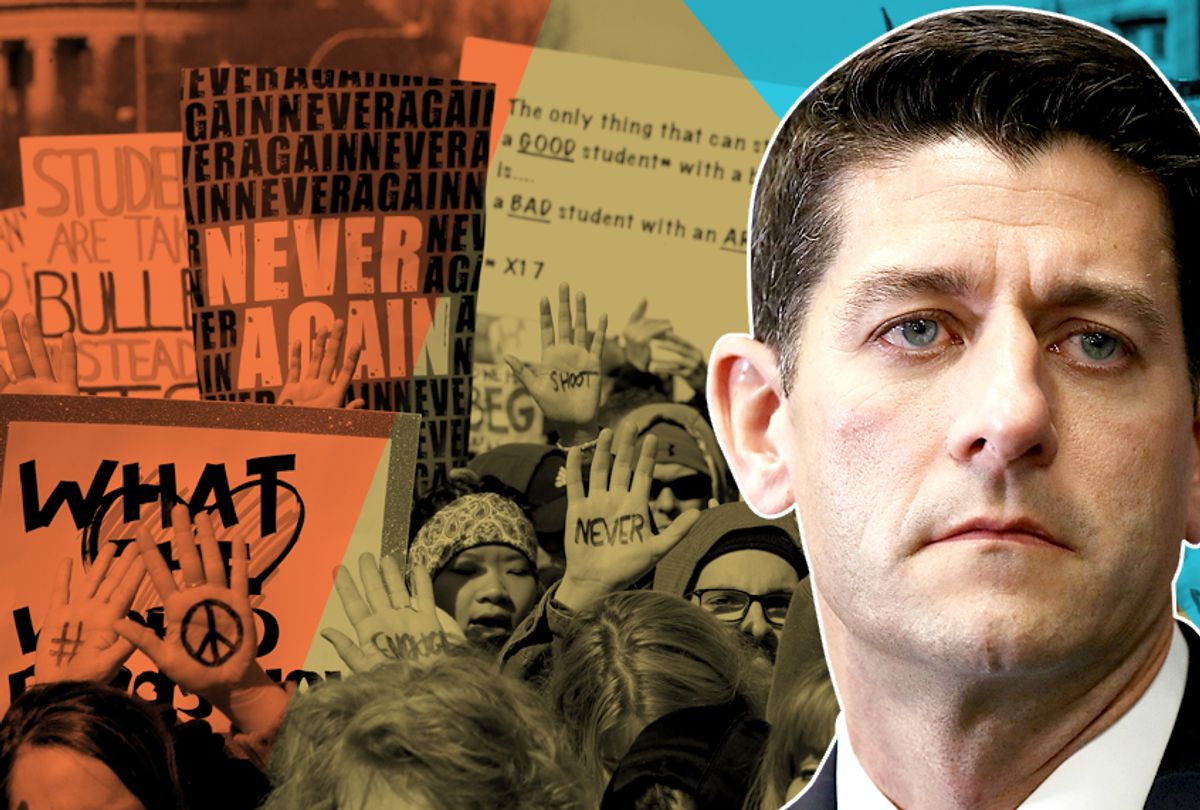 One day after hundreds of thousands of people participated in the worldwide March for Our Lives protests to demand action against gun violence, teens in Wisconsin announced they weren't done marching and will be walking 50 Miles More, which is both the name and the mission of the student-led activist group leading the crusade.

"We started 50 Miles More to keep the national demand for gun reform going after the March 24th March for Our Lives events are over," the group's website says. "Our generation has grown up watching school shootings destroy lives and then get swept out of the spotlight. We refuse to let this happen again."

In solidarity with the high school students from Parkland, Florida, more than 40 students from Shorewood High School, a suburb of Milwaukee, have embarked on a four-day, 50-mile march from Madison to Janesville, the home town of House Speaker Paul Ryan.

Their goal? To point the finger at the Republican Congressman for his "lead role in blocking and burying any chance of gun reform again and again," the 50 Miles More website states.

"We have a unique opportunity, because the speaker of the House is the most important member of the House, and he's from Wisconsin," 17-year-old Brendan Fardella, one of the march organizers, told CNN. "This is a unique way to catch his attention and call him out for his constant burying of possible gun legislation that would save hundreds of lives every day in this country."

Instead of hitting the beach, binge watching a new television show or catching up on sleep, the students will be spending their spring break walking more than a dozen miles a day and sleeping on gym floors.

The students were also inspired by civil rights leaders of the 1960s. It's not a fluke that the four-day, 54-mile journey from Madison began Sunday — exactly 53 years after Martin Luther King Jr. led thousands of demonstrators to the steps of the capitol in Montgomery, Alabama, to conclude a five-day, 54-mile march from Selma.

"We looked to history and an earlier generation of young leaders who fueled real change," the group's website says. "In 1965, civil rights leaders organized the multi-day, 54-mile Selma to Montgomery marches. Those 54 long miles took us a long way toward progress and are the inspiration for our march."

At the end of every mile walked, the marchers honor a victim of gun violence. The students have also been tweeting out the names and ages of victims.

In addition to calling for stricter gun control laws, the students shared a list of demands to their website, which includes a ban on "military-style weapons" and "accessories that turn semi-automatic weapons into automatic weapons." They also want background checks and a four-day waiting period on all gun sales, as well as to raise the age restriction to 21 for gun purchases.

The march is expected to end Wednesday with a rally in Janesville, at Traxler Park, where the student activists will voice their concerns. Katie Eder, an 18-year-old organizer of the march, told CNN they are inviting "everyone of any age to come out."

"What cheeses off kids in Wisconsin? B.S. gun laws," the 50 Mile More marchers wrote on social media earlier this month.