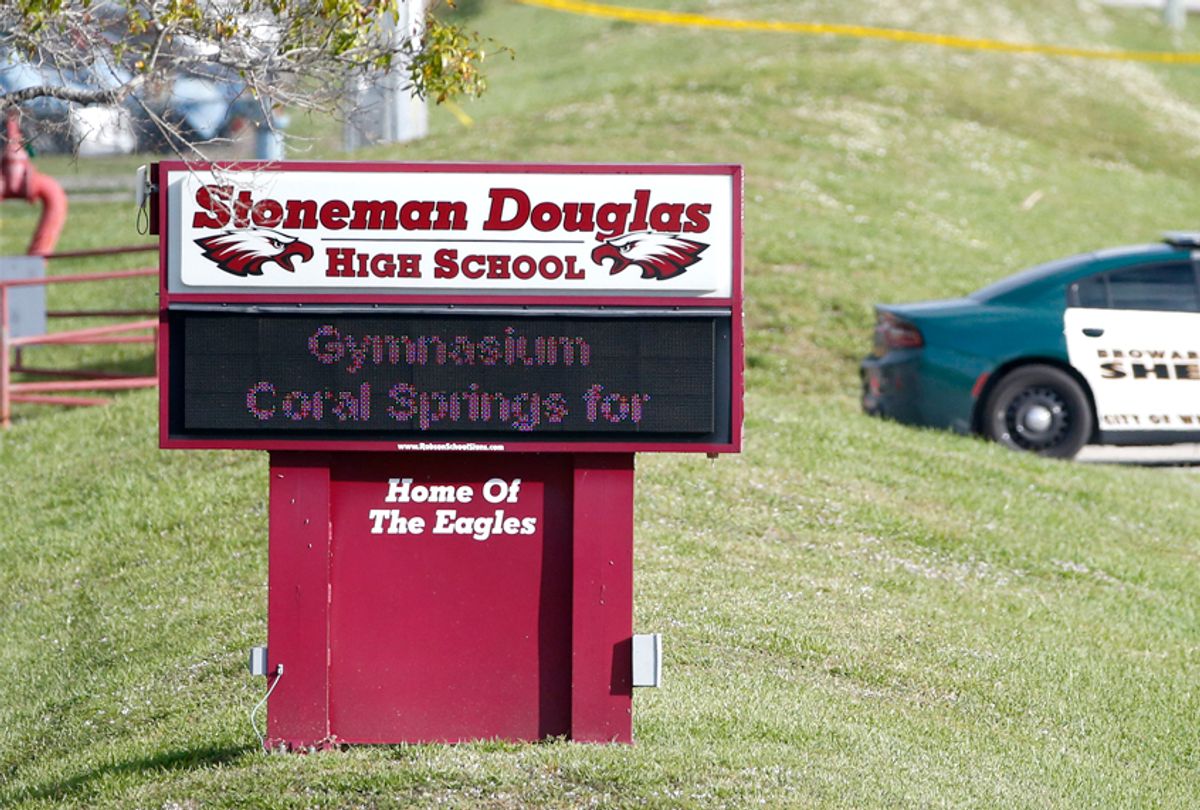 One of the survivors from the Parkland school shooting says that Marjory Stoneman Douglas High School is now like a prison — because, apparently, ruining school life for America's youth is a better alternative than regulating guns.

David Hogg, a Parkland survivor who has since become an activist for the #NeverAgain movement supporting gun control, described his high school as "like a prison," to Axios' Mike Allen on Friday. Hogg also expressed concern that, because of the "racial disparity between black and white students," the increased number of school resource officers could make life even worse for students of color. Hogg also criticized the media for "not giving black students a voice . . . My school is about 25% black, but the way we're covered doesn't reflect that."

This wasn't the first time that the Parkland student activists drew attention to the racial disparity in how gun control is covered. They made that point as well during a rally at Thurgood Marshall Academy in Southeast Washington, D.C. on Thursday, according to The Washington Post. That event occurred prior to the March for Our Lives rally that is planned for this weekend, during which hundreds of thousands of students and their families are expected to convene on Washington to press Congress for stricter gun laws.

The March for Our Lives rally is merely the latest example of a major protest in reaction to outrage from "the mass shooting generation," as Hogg put it earlier this week. A number of the Parkland shooting survivors have made media appearances and appeared at protests in the month since the shooting, drawing the anger and ridicule of conservatives and even humiliating Sen. Marco Rubio, R-Fla., during a highly publicized town hall event last month.

Yet the fact that the Parkland school has been turned into a prison-like environment, and meaningful gun control legislation is still verboten by the Republican Party (as most recently evidenced by the failure to include anything substantial on the issue in the new budget), reinforces an important point — namely, that opponents of gun control are willing to try just about anything they can think of to avoid even modest increases of gun regulations.

Perhaps the most controversial idea to come from the "anything but guns" crowd is the notion that we should arm teachers. It's an idea that has been supported by President Donald Trump and a number of other prominent conservatives, even though it wouldn't work and is likely to lead to racial profiling. There have even been two incidents this month in which personnel on school grounds accidentally discharged guns, underscoring the absurdity of that proposal.

It would be one thing if policymakers were proposing beefing up security at our schools in addition to strengthening gun control laws; while this could still be considered excessive and unfair to the students, at least no one would question that they're trying everything possible to protect America's children. The problem, though, is that ideas like spending more money on security guards, arming teachers and improving America's mental health care system (which has merit) aren't being offered by the anti-gun control movement in good faith. They're being suggested because that movement's primary objective is to prevent any legislation from passing that regulates guns.

The goal, then, isn't to protect children, but to see if any solution to the problem of mass shootings at schools exists which won't require conservatives to give an inch to gun control proponents.

The modern pro-gun movement — that is, a movement comprised of individuals who believe the Second Amendment guarantees them an absolute right to bear arms, and which insists that any effort to regulate or ban certain types of guns is unconstitutional — began in the 1970s, with the rise of the modern New Right. Prior to that decade, it was generally acknowledged that the government had the right to regulate firearms in certain situations. Even conservative icon Ronald Reagan supported gun control measures back when he was governor of California (when the most visible public figures brandishing guns were the Black Panthers). After the NRA was transformed from a sportsmen's club to a political advocacy group by radical right-wingers in the 1970s, however, they jumped on the coattails of Reagan's conservative revolution and linked thwarting gun control with sticking it to liberals in general for millions of Americans.