Don't be fooled by the pathetic turnout in D.C. or the media mockery. "Alt-right" racists are still winning 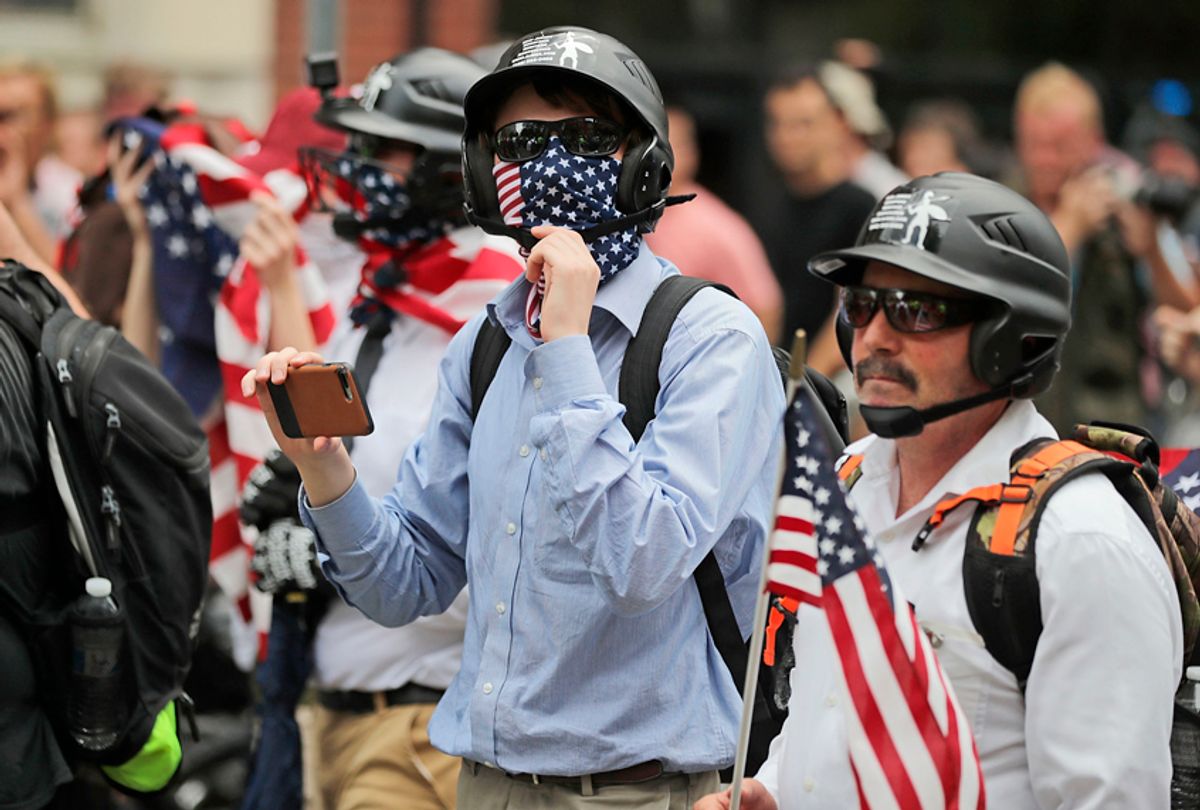 DC Metro Police form a protective phalanx around participants in the Unite the Right rally as they march to the White House, August 12, 2018. (Getty/Chip Somodevilla)
--

A week ago Sunday, white supremacists gathered in Washington to celebrate the one-year anniversary of the riot in Charlottesville, Virginia, where Heather Heyer was murdered and dozens of other people injured by a racist mob. There was no mass turnout for the "Unite the Right 2" rally. Instead, only two dozen or so white supremacists and other members of the "alt-right" were present, vastly outnumbered by at least 1,000 counter-protesters. The racists rapidly skulked off, humiliated and defeated. Their opponents were jubilant.

Given Donald Trump's unrelenting and largely unabated assault on democracy and human rights, it is natural for decent people to celebrate a win. But that hope can also lead to miscalculations. Unite the Right 2 marked a tactical and not a strategic victory in what will be a long struggle against the right-wing forces that installed Donald Trump in the White House.

It remains true that white supremacy is both resurgent and ascendant in America. Both public policy and day-to-day norms are being reoriented by a form of backlash politics that emphasizes an explicitly white-supremacist agenda and blends Christian nationalism, racial authoritarianism, plutocracy, sexism and nativism.

There are many examples.

White supremacists and those sympathetic to them exert a large amount of control and influence over Donald Trump and his administration. The president himself has shown through his words and deeds that he is a racist. Trump's inner circle, including such current or former advisers as Stephen Miller, Michael Anton, Steve Bannon and others are either openly in alliance with neo-Nazis and other white supremacists or largely agree with their views as channeled by the "alt-right" and its "ethno-nationalist" agenda.

Writing at the Atlantic, Adam Serwer explains this relationship between Donald Trump, the Republican Party and white supremacists this way: "It is not just the white nationalists who win when racialized fears surrounding crime, immigration, and terrorism shape the political behavior of white voters. Donald Trump also wins. And both the Trump White House and the men who rallied in Charlottesville for the cause of white power know it."

White supremacist and other far-right organizations are not as disorganized and discombobulated as their critics would like to believe. Research by the Southern Poverty Law Center shows there are at least 1,000 active hate groups in America. This number has grown by 20 percent in the last four years. White supremacists and other members of the "alt-right" have killed dozens of people and injured hundreds more in attacks across the country, beginning with Trump's presidential campaign and continuing through his first two years in office.

Fox News and other parts of the right-wing echo chamber circulate white supremacist talking points on a near-daily basis to an audience of millions, most of them older white conservatives who have been conditioned for years in ways that make them easy to manipulate. This sector of the public is being actively radicalized into hate.

While Unite the Right 2 may have summoned very few overt hate-mongers, new research by political scientist George Hawley suggests that there are around 11 million white Americans who agree with the "white nationalist" values espoused at that rally -- values which also encouraged the lethal violence in Charlottesville as well as Dylann Roof's massacre of nine black people at Emanuel African Methodist Episcopal Church in Charleston.

In "The Demography of the Alt-Right," Hawley explains that "studying the attitudes and demographic traits of people who self-identify with the Alt-Right or a similar ideology is a great challenge." While it's accurate to describe such people as racist, Hawley writes, "there are elements to these kinds of movements beyond simple racial animus, anxiety, or resentment."

Although the racist right can be ideologically diverse and make many different arguments, there are three key sentiments that are widely shared across these movements: 1) a strong sense of white identity, 2) a belief in the importance of white solidarity, and 3) a sense of white victimization. Although someone who rates high on all of these views may not necessarily identify with the Alt-Right or a similar movement, we can anticipate all or nearly all individuals who are involved in white identity politics to share these attitudes.

The 2016 American National Election Survey (ANES), which was conducted over several waves during Donald Trump's campaign for the presidency, included several helpful questions on racial attitudes. Some of these were new additions to the survey. Respondents were asked how important their race was to their identity on a five-point scale ranging from "not at all important" to "extremely important." They were also asked a question measuring their feelings of white solidarity: "How important is it that whites work together to change laws that are unfair to whites?" This followed the same five-point scale. Finally, we can assess survey respondents' feelings of white victimization from their answers to the question of how much discrimination whites face in the U.S., also on a five-point scale, ranging from "none at all" to a "great deal."

Of roughly 3,000 "non-Hispanic white respondents," Hawley found that only a minority responded strongly to any of those questions. But the overlap between the three questions was what he was looking for:

[A]bout 28% expressed strong feelings of white identity; about 38% expressed strong feelings of white solidarity; and about 27% felt that whites suffer a meaningful amount of discrimination in American life. A much smaller minority, about 6% of respondents, expressed all three opinions. It is worth noting that a 2017 Washington Post-ABC News poll estimated that about 10% of respondents supported the Alt-Right. [Emphasis added.]

That 6 percent translates to about 11 million core supporters, along with millions more who would express broad agreement with "white nationalism" (a more "polite" articulation of white supremacist values where the superiority of "whites" is attributed to "culture" rather than biology). "Only" 6 percent of a population of about 198 million white people in the United States is still a large pool of potential recruits and allies for a racist, anti-democratic authoritarian movement.

It will no doubt upset many people to be confronted with the fact that despite the way white supremacists are caricatured by the news media and mocked by their opponents, these extremists are still "winning" the political battle in Trump's America. While their ideas are largely unpopular and viewed by most Americans with contempt, white supremacists such as those who marched in Washington last weekend know that they do not need to win at the polls or dominate the streets to continue to gain power and influence.

As the United States becomes more diverse and the Democratic Party continues to embrace its identity as a coalition that actually looks like America, the Republican Party and the conservative movement will do literally anything to win. That includes a naked embrace of "white politics" and a "white strategy" devoted to racial authoritarianism and maintaining "white power" at any cost. As historian Stephen Kantrowitz warned readers in a recent essay at the Boston Review, "White Power is still with us. Indeed, it has broadened its reach online, where it continues to build an anti-liberal, anti-government, white supremacist movement that radicalizes individuals."

The reckoning is coming to America. In many ways, it is already be here, as Trump and his allies fight to "Make America Great Again" by returning the country to its worst history, its worst habits and the worst aspects of its moral character.