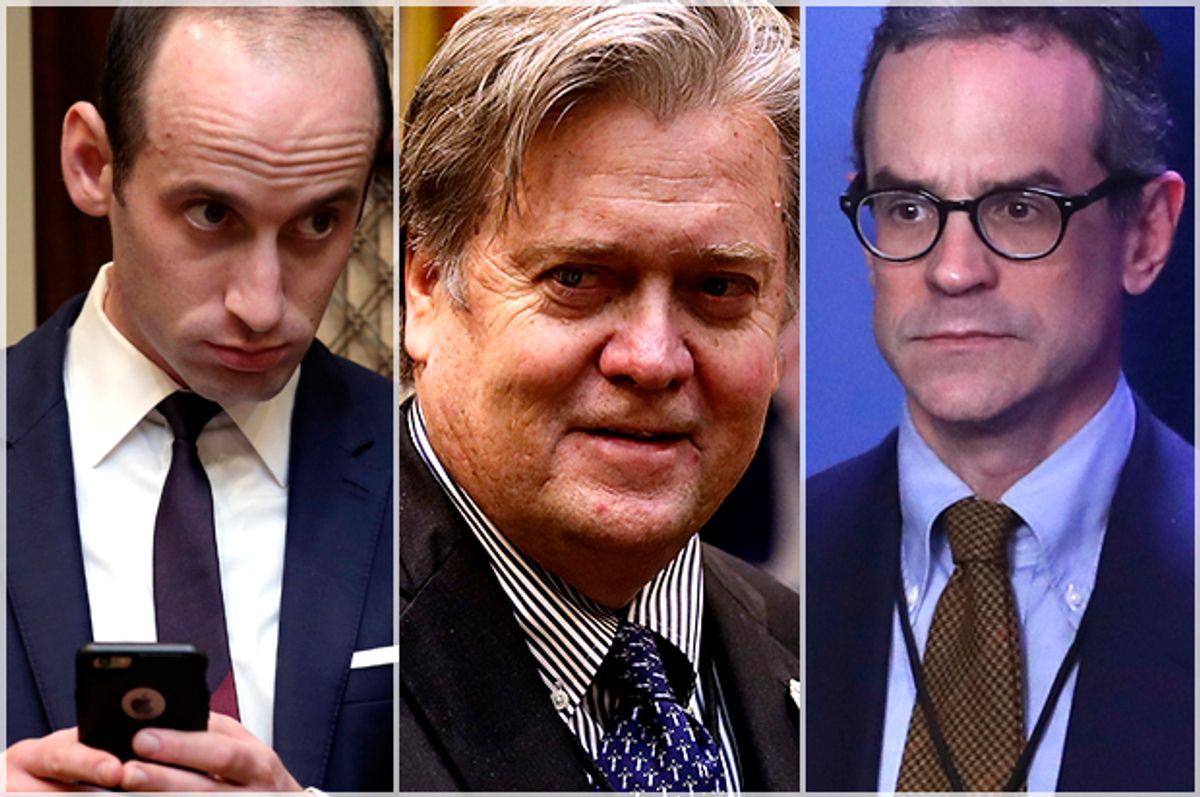 Donald Trump's administration is built around a brain trust of white nationalists. To deny that fact is to ignore a crucial element of this national crisis: America's "greatest generation" defeated Nazism during World War II, and 70 or so years later one of the country's two leading political parties has injected a more polite version of that poison into its veins and rode to power in Washington on a wave of bigotry and racism.

Until recently Bannon ran the right-wing website Breitbart News, which has a well-known white nationalist tilt and loves to publish stories about  "black crime" and "Muslim hordes" beating down the gates of "Western civilization." As Bannon has said, Breitbart functions as a mouthpiece for the "alt-right," which largely serves as a rebranding label for various white nationalists and white supremacists.

Miller, who made headlines over the weekend defending Trump's false claims of "voter fraud," is a fierce advocate of "ethno-nationalism," meaning the racist belief that Europe and America must protect their culture and civilization (which are white by default) from outsiders who do not share their "Judeo-Christian values." Miller echoed those talking points on Sunday talk shows, claiming that "millions" of "illegal aliens" voted against Donald Trump in the 2016 presidential election.

As a college student, Miller worked on political projects, according to news reports, alongside his classmate Richard Spencer, one of America's most prominent white supremacists.

Sessions has been viewed as a racist in his home state of Alabama for decades. He has said that the NAACP is an "un-American" organization, is said to have insulted a black attorney calling him "boy," has backed laws that make it more difficult for African-Americans to vote, and once joked that he thought the Ku Klux Klan was "all right" until he learned that some of its members smoked pot. Sessions' racial views are so extreme that he was earlier denied a federal judgeship by his fellow Republicans in 1986.

In his role as the attorney general and leading law enforcement official of the United States, Sessions will now be tasked with defending the civil rights of racial minorities and other vulnerable populations. History is not always a story of progress. The office of the attorney general was instrumental in fighting the Ku Klux Klan and its threat to African-Americans during Reconstruction, under President Ulysses S. Grant. Under Trump, the attorney general is a man who apparently does not view protecting civil rights as a priority.

When the Trump administration recently refused to acknowledge how Jews were the primary and specific targets of the Holocaust, it was White House deputy assistant Gorka who called  the controversy over that decision as "asinine." Perhaps it is no coincidence then that Gorka — who was born in London to Hungarian émigré parents — has repeatedly been photographed wearing a medal associated with the Order of Vitéz, an overtly anti-Semitic chivalric organization that collaborated with the Nazi regime during World War II.

Horthy, the Hungarian regent that [the order] supported, held a profound animus for the Jews of Hungary. "Concerning the Jewish question, for all my life, I have been an anti-Semite," Horthy once wrote. His government allied with Adolf Hitler's Nazi Germany, enacted anti-Semitic laws, brutally cleansed Hungarian Jews, enslaved others in work details and collaborated with German authorities to deport them to death camps.

"Many supporters of the Horthy regime were enamored by the Nazis and Hitler, and the ‘knights’ were especially so," Balogh told LobeLog. "After 1948, one wouldn’t have bragged about his father being a 'vitéz.' Lately, however, especially since 2010, it has become fashionable again to boast about such ‘illustrious’ ancestors."

In keeping with his white nationalist affinities, Gorka is also hostile to Muslims and served in a senior role at the website Breitbart.

Before that article went viral, Anton published an earlier essay called “Toward a Sensible, Coherent Trumpism." In it, he defended the anti-Semitic America First movement of the pre-World War II years, with an obvious eye toward Trump's repurposing of the phrase. Anton elaborated further on that theme:

[One] source of Trump’s appeal is his willingness — eagerness — gleefulness! — to mock the ridiculous lies we’ve been incessantly force-fed for the past 15 years (at least) and tell the truth. “Diversity” is not “our strength”; it’s a source of weakness, tension and disunion. America is not a “nation of immigrants”; we are originally a nation of settlers, who later chose to admit immigrants, and later still not to, and who may justly open or close our doors solely at our own discretion, without deference to forced pieties. Immigration today is not “good for the economy”; it undercuts American wages, costs Americans jobs, and reduces Americans’ standard of living. Islam is not a “religion of peace”; it’s a militant faith that exalts conversion by the sword and inspires thousands to acts of terror — and millions more to support and sympathize with terror.

This is a crystallization of the political worldview that drives Donald Trump's fascist and authoritarian movement as well as conservatives more generally.

Of course, Anton's analysis is factually challenged. There are 1.6 billion Muslims in the world. An extremely small percentage of them have committed acts of terrorism. By contrast, at the Ku Klux Klan's height of power during the 1920s, about 15 percent of the eligible white male adult population were members. As reported by the Pew Research Center, that figure is higher than the level of support given ISIS by respondents in 11 countries with significant Muslim populations.

Islam is not a "foreign" religion. African slaves brought Islam to the Americas almost 400 years ago. Christian "dominionists," Christian nationalists and other right-wing evangelicals have a good deal in common with Muslim extremists: They also believe in an "end times" eschatological battle between good and evil and believe that public policy should be directed toward serving that goal. Christian and Muslim extremists also do not believe in a barrier between church and state. Both groups consider homosexuality as sinful, are overtly hostile to LGBT rights and view women's equality as a threat.

Social scientists have demonstrated that diversity is a net gain for productivity, problem-solving and overall economic growth. Moreover, economists have shown that racial and gender discrimination in the labor market costs the U.S. economy hundreds of billions of dollars.

Immigration has also been a net gain for the U.S. economy and allowed the country to grow and remain globally dominant while more homogeneous societies like Japan have stagnated. Labor performed by immigrants (both documented and otherwise) subsidizes the American standard of living by lowering food and other costs.

Anton's observation about the United States being a "settler society," however, is accurate and worth a closer look. As pointed out by political scientist Samuel Huntington and others, contrary to popular myth, America is not a nation of immigrants. Rather, the United States is a society where new arrivals (largely meaning white Northern Europeans) exterminated the existing population and then forced their culture on the survivors. These settlers then constructed a hierarchy whereby they were dominant and others — enslaved Africans, Native Americans and successive waves of immigrants, especially those of color — were oppressed. This arrangement is known as "racial settler colonialism." The United States fits this model, as do other nations like Australia, Brazil and Israel. For Anton, such a history is not problematic but rather ideal.

Anton, Bannon, Gorka, Miller and Sessions find themselves in the upper stratum of decision-makers, shaping public policy for a racially diverse and multicultural society. They view such attributes as weaknesses instead of strengths. This does not bode well for the American people as a whole — especially those of us on the other side of the color line.