Trump's plan to roll back coal pollution regulation to cost up to 1,400 more deaths a year 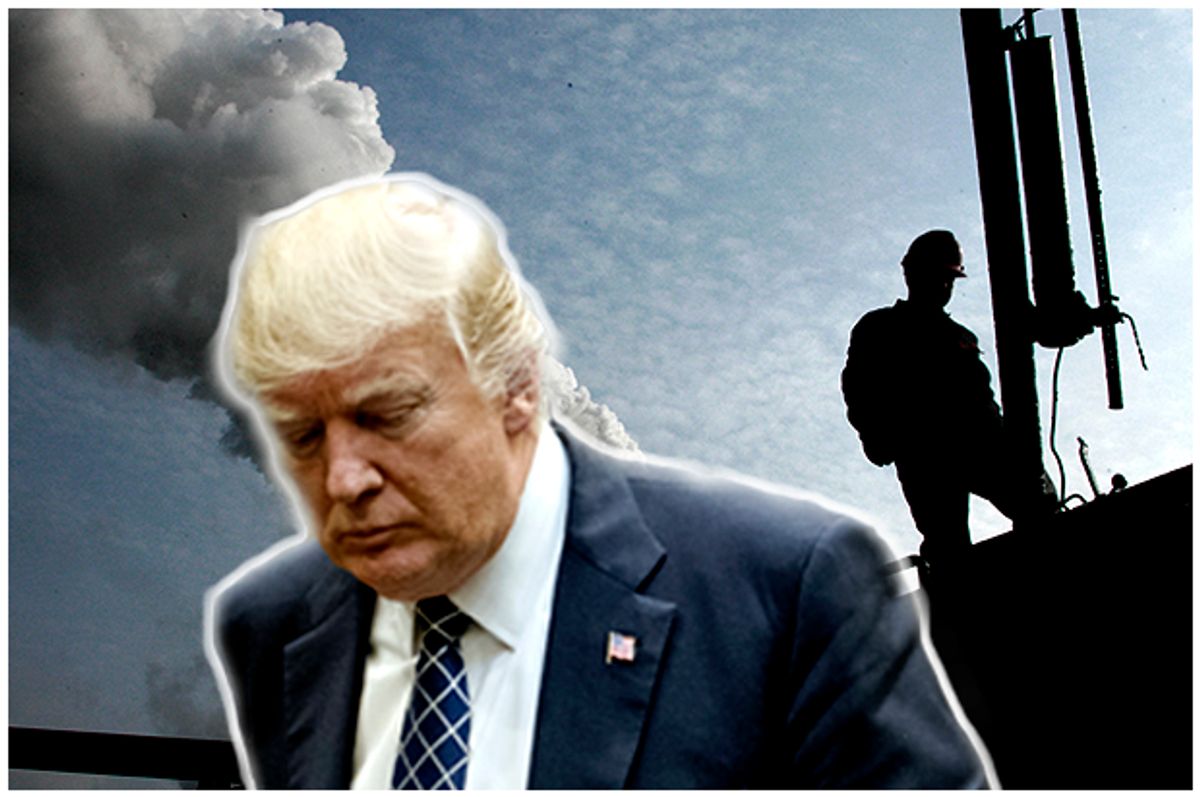 President Donald Trump has just lifted a number of regulatory measures that will help the coal industry... and exacerbate the problem of man-made global warming.

Trump is going to roll back Obama's restrictions on the quantity of climate changing emissions that can pollute the atmosphere from coal-fired power plants, according to CBS News. The plan would allow states to have more control over how to regulate their coal plants, including whether or not to relax pollution regulations if a plant's owners say it needs to be upgraded. Trump has also instructed Rick Perry, his Secretary of Energy, to work to keep coal-fired and nuclear power plants open.

Trump has already received intense criticism for his other pro-coal and anti-environmental policies. Earlier in his administration he rolled back car-mileage standards and pulled the United States out of the Paris climate accord. He has also implemented or pushed for policies that, quite literally, came from the wish list of a coal magnate who was one of Trump's biggest supporters, Robert E. Murray.

Hundreds of pages of technical analysis released by the Environmental Protection Agency along with their proposal indicate that it will, quite literally, kill hundreds of people. As The New York Times summarized on Tuesday:

In that scenario, the Trump E.P.A. predicts its plan will see between 470 and 1,400 premature deaths annually by 2030 because of increased rates of microscopic airborne particulates known as PM 2.5, which are dangerous because of their link to heart and lung disease as well as their ability to trigger chronic problems like asthma and bronchitis.

By contrast, the Obama administration’s central argument for its Clean Power Plan was that the measure protected human health as well as the climate. Specifically, it said, the plan would help avoid between 1,500 and 3,600 premature deaths annually by 2030.

Mr. Obama’s E.P.A. also estimated that, by 2030, the Clean Power Plan would result in 180,000 fewer missed school days per year by children because of ozone-related illnesses. Asthma instances would also drop significantly, according to the analysis.

By contrast, the Trump administration analysis finds that own its plan would see 48,000 new cases of exacerbated asthma and at least 21,000 new missed days of school annually by 2030 because those pollutants would increase in the atmosphere rather than decrease.

Although Trump justifies his anti-environmental policies by arguing that they will help save coal jobs, the Charleston Gazette-Mail recently published an editorial explaining that they are unlikely to have that effect.

The Trump administration’s rules most likely would leave it up to states to handle emission standards, giving coal plants an incentive to stay open longer.

But those effects will not last long, experts said.

“All it does is to delay the closure or conversion of some existing coal plants,” said Michael Gerrard, who teaches environmental law and energy regulation at Columbia Law School. “If they had to comply with the Clean Power Plan as released by the Obama administration, many utilities would be required to go to more use of natural gas and renewables, so this will delay that impact.”

Despite Trump’s repeated promise to fight the “war on coal,” it is not regulations, but cheaper natural gas, that has hurt the industry, experts say.

Top climate scientists agree that carbon emissions have caused the Earth to heat up, resulting in extreme weather, agricultural production problems and other issues that are likely to have a long-term impact on how easily human beings can live on this planet. While Trump's new pro-coal policies haven't caused this problem, they are without question making it worse.

Why the war on science is so dangerous