"A woman who is feeling something is a bitch": Our love-hate affair with women's bodies

Mara Altman's "Gross Anatomy" delves into the wild world of our own bodies, chin hairs and all 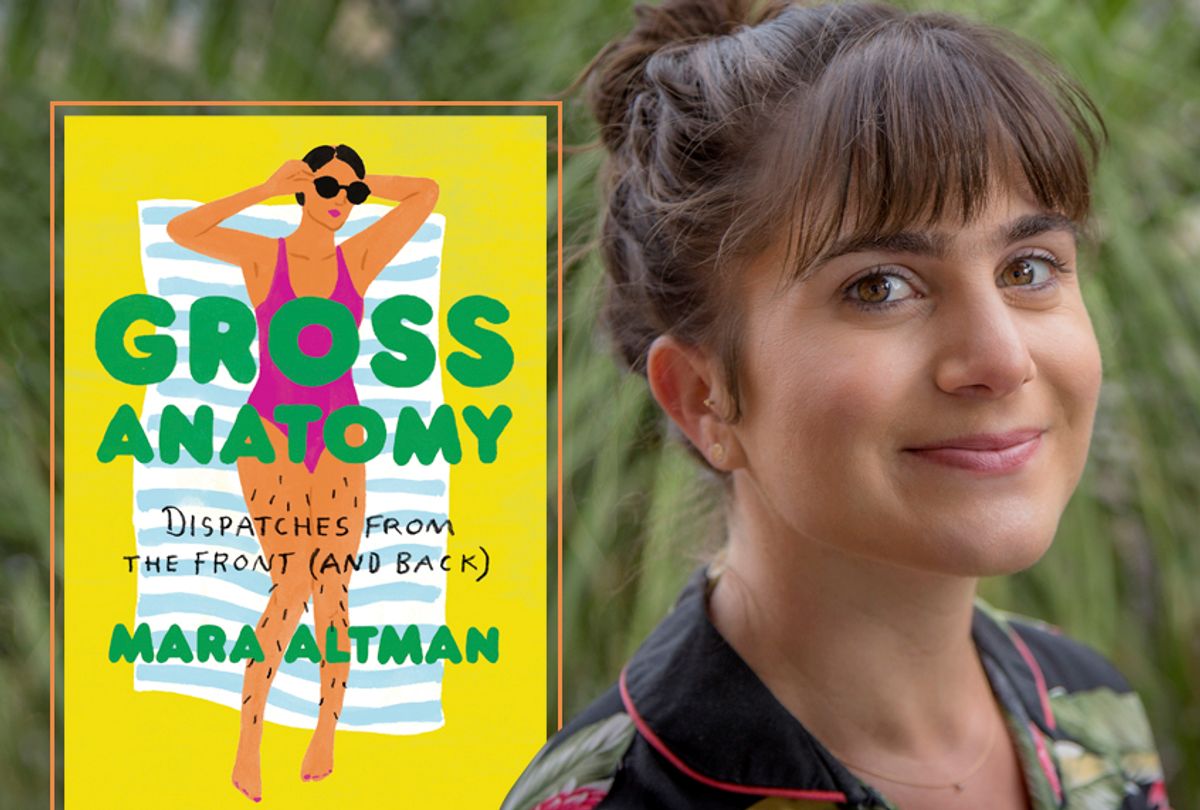 I had just entered puberty when my nemesis arrived. A single, surprisingly bristly hair, on my chin. Now, decades later, that hair is my Freddy Krueger. Every time I think I've destroyed it for good, it returns. And when it does, I cannot pluck it fast enough. I assume the hair and I will tango like this until I die. Why do I care? And why does the hair always win?

Mara Altman understands — and shares — my predicament. A few years ago, she broke the body hair taboo a successful Kindle single called "Bearded Lady." Now, she goes even further, delving into the world of sweaty armpits, smegma and more. "Gross Anatomy: Dispatches from the Front (and Back)" is an exuberant and illuminating women's bodies, and our often fraught relationships with them. It's a secret history, one that doesn't just investigate what's in our belly buttons, the origins of the duckface, or why some orifices become "floppy," but also asks why so often our everyday corporeal experiences remain denied and undocumented. It's also full of surprising revelations about your sweat and PMS.

In a recent phone interview, Altman and I talked about lice, vaginal odor and the disappearing pubescape.

"I'm totally of the belief that you should do with your body whatever you want, makes you feel good," Altman said. "But it would be great if there wasn’t so much shame around it."

She uses her own experience with keeping her facial hair a secret from her partner — now her husband — as an example. "To feel like a complete woman, I had to get rid of a part of myself, which was just confusing if you think about it like that. The urge to want to fit in, or not be seen as a kind of broken woman in a sense like, 'Why am I growing a beard?' was very strong in me…. When I did a lot of my body hair-removing stuff, it was coded in anxiety and fear of being found out. Now that I've put it out there, I still shave my legs. I shave my pits. I don't do anything with the bush. I try and keep my goatee under control, but it's not soul-crushing if someone's going to find me out. There's a lot less tied up in it."

But Altman acknowledges that what the world wants is "a cooperative woman," and that applies to all of us.

"It's like, if you're a woman who doesn't have hair on her arms, you're cooperative. The world wants to look at your eyebrows and not just know that your face is wider, or more child-like, but also that you're playing by the rules."

READ MORE: College bound after a brush with death: How do you let your kid go when you almost lost her?

"It is more than just being bald down there," Altman said. "It also made us look more critically at our genitals. Maggie Han, creator of Camel No, says that there's no buffer any more between the pants seam and your vulva. You're seeing more contour, and people are getting upset at the contour, and they are being more critical. 'There's another part of my body I can be mad at!'"

But on the other side of our cultural body horror are the age-old questions of how we're supposed to do feminism right. If you feel great in false eyelashes and self-tanner, are you automatically a dupe of the patriarchy? The degrees to which a woman grooms or doesn't, diets or doesn't, ages or fights aging tooth and nail are always up for public judgment, regardless of what she does.

And there's perhaps no more telling way in which the culture defines the female bodily experience than with its relationship to periods.

"Only about 10 percent of the population actually would be diagnosed with PMS," said Altman, "which is kind of crazy because I think a lot of people put it on themselves to scapegoat their emotions."

Many women, Altman says, dismiss the intensity of their feelings as PMS rather than the possibility that "it's the time of the month when we're more in touch with our feelings than ever."

"It's really hard to accept women who really know what they want, who really are very clear about how they're feeling," she said. "So instead of discounting our emotions during that time of the month, we can actually look at them as a headlight showing us how we feel and what we need and what are the issues are."

"Isn't it fascinating, how Michael Stolberg told us that through the centuries, PMS symptoms have been interpreted differently?" she added. "It really shows you the time we're living in and says so much about who we living in, that a woman who is feeling something's a bitch."

Ultimately, Altman says, patriarchy and the culture it shapes has a very narrow definition of what's acceptable for women, and that includes beauty standards.

"We're shamed if we don't fit into that ideal of beautiful, but then we're shamed again when we try to fit and do it, whether it's getting labiaplasty or shaving too much or plucking too much," she said, encouraging women not to change what they do to their bodies, necessarily, but rather the culture around how they are taught to feel about it.

"It might be like, 'It's not such a big deal after all that my vagina smells. My vagina smells because my bacteria are there protecting my body.' Finding out the reasons why these things happen," she said.

We bleed. We get hemorrhoids. We make funny noises when we have sex. We get funky stuff in our navels. Because women are humans too, even if we live in a world that would sometimes prefer we be unscented, denuded ones. And while I will fight my chin hair to my last breath, it's reassuring knowing I'm not the only woman on earth who has one.

"The most wonderful thing about it of all — even after all the research and talking to the evolutionary theorists and gender studies professors — was talking to the women themselves," said Altman. "I found out that not only did they have chin hair as well, but they also have the same nightmare scenario of being caught in a coma and having their dearest family members find out that they have a goatee — and appointing one of their friends, family members, or a sister to come and pluck those if that ever happens."

We all need a little sexual healing