Dershowitz: Campaign finance violations are "regarded as kind of jaywalking in the realm of things about elections" 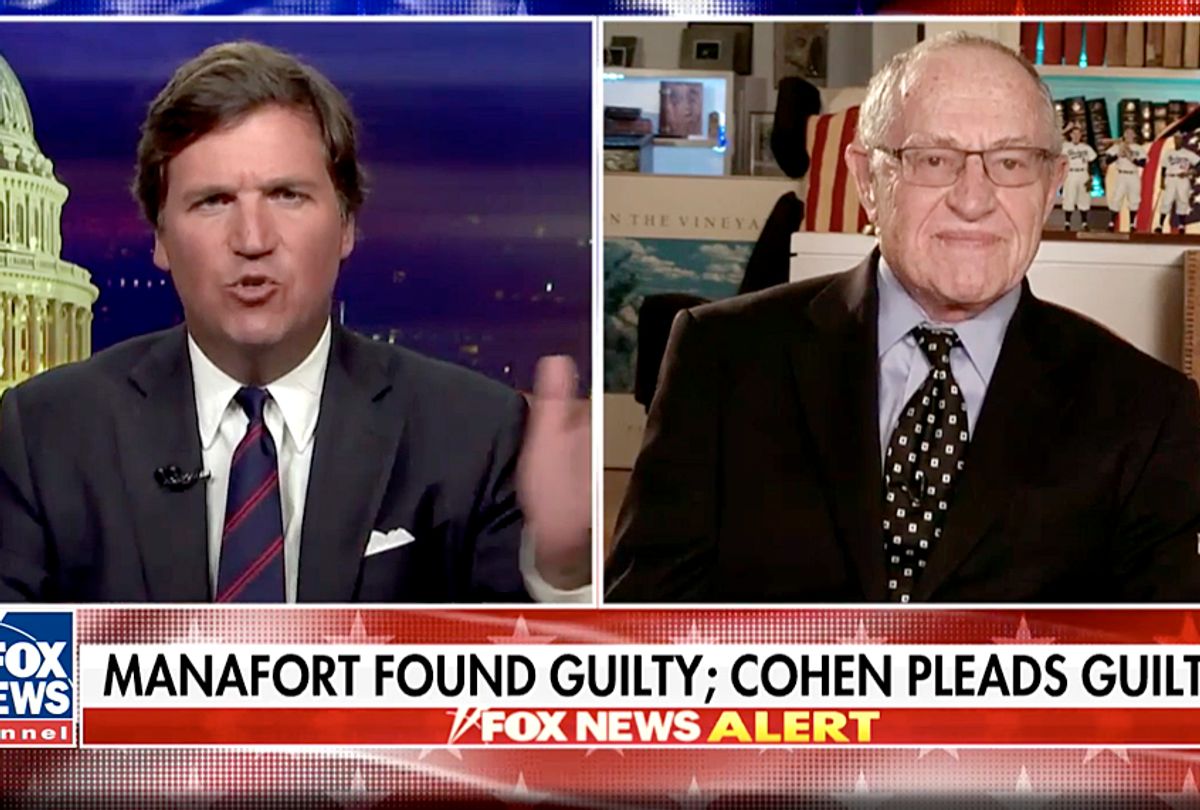 Alan Dershowitz, the famed attorney, constitutional scholar and author of the new book "The Case Against Impeaching Trump," appeared on Tucker Carlson's Fox News show Tuesday night. He used the opportunity to scoff at those who are "playing funeral music" for President Trump following the news that Trump's former campaign chair, Paul Manafort, has been convicted on eight counts of financial fraud while his former personal attorney, Michael Cohen, pleaded guilty to eight criminal charges.

Cohen's plea bargain included campaign finance charges and making an "excessive campaign contribution." He admitted that he had paid off adult film actress Stormy Daniels "in coordination and at the direction of the candidate," a clear reference to Donald Trump, for "the purpose of influencing the [2016 presidential] election."

Carlson indicated that it's a "common scenario among famous people" to make secret payments to people in an effort to suppress scandalous and perhaps damaging information from surfacing. He wondered, "How is that a crime?" Dershowitz explained that the "allegation here is it was Cohen who paid it and made a campaign contribution, which he didn't report, at the direction of the president." When the Fox News host said he still didn't understand, Dershowitz repeated himself and said that if "somebody else pays the money in order to influence the outcome of the election, it is technically, perhaps, a violation of the election laws."

Dershowitz then proclaimed that violating election laws doesn't have serious consequences, and is "regarded as kind of jaywalking in the realm of things about elections." He continued: "Every administration violates the election laws, every candidate violates the election laws when they run for president. Usually they pay a fine or something like that. Here, they're trying to elevate this in to an impeachable offense or a felony against the president." The Harvard professor added that while Tuesday was a "negative day" for the Trump presidency, "we're a long way from tolling the bells for this administration."

Despite Dershowitz's declaration that Cohen's guilty plea does not threaten Trump, he has previously told Salon that Trump paying "hush money" could be an impeachable crime, and that he would support Trump's removal from office if it turned out he had been involved in coordinating payouts to women to help win the 2016 presidential election.

Laying out what was then a hypothetical scenario, Dershowitz told Salon in a July interview what it would take for him to change his mind about Trump: "He committed impeachable crimes. He paid hush money, he told his people to lie to government officials, he destroyed evidence. Those are crimes – real obstruction of justice – and I would support any president's impeachment if they committed a misdemeanor or high crime."

Only three U.S. presidents have been subjected to impeachment proceedings: Andrew Johnson and Bill Clinton were impeached but acquitted and remained in office; Richard Nixon resigned in 1974 in the face of imminent impeachment.

Given the parameters of the U.S. Constitution, the president's actions may amount to grounds for impeachment "only if you can demonstrate that he or she has committed a specified crime — treason, perjury, or other high crimes and misdemeanors," Dershowitz explained. If you cannot prove such a crime, he insisted, "impeachment becomes an unconstitutional process."

Famed constitutional lawyer is supporting Trump, but lays out a scenario for his removal.