Terence Nance on "Random Acts of Flyness": How HBO's most daring show gets made 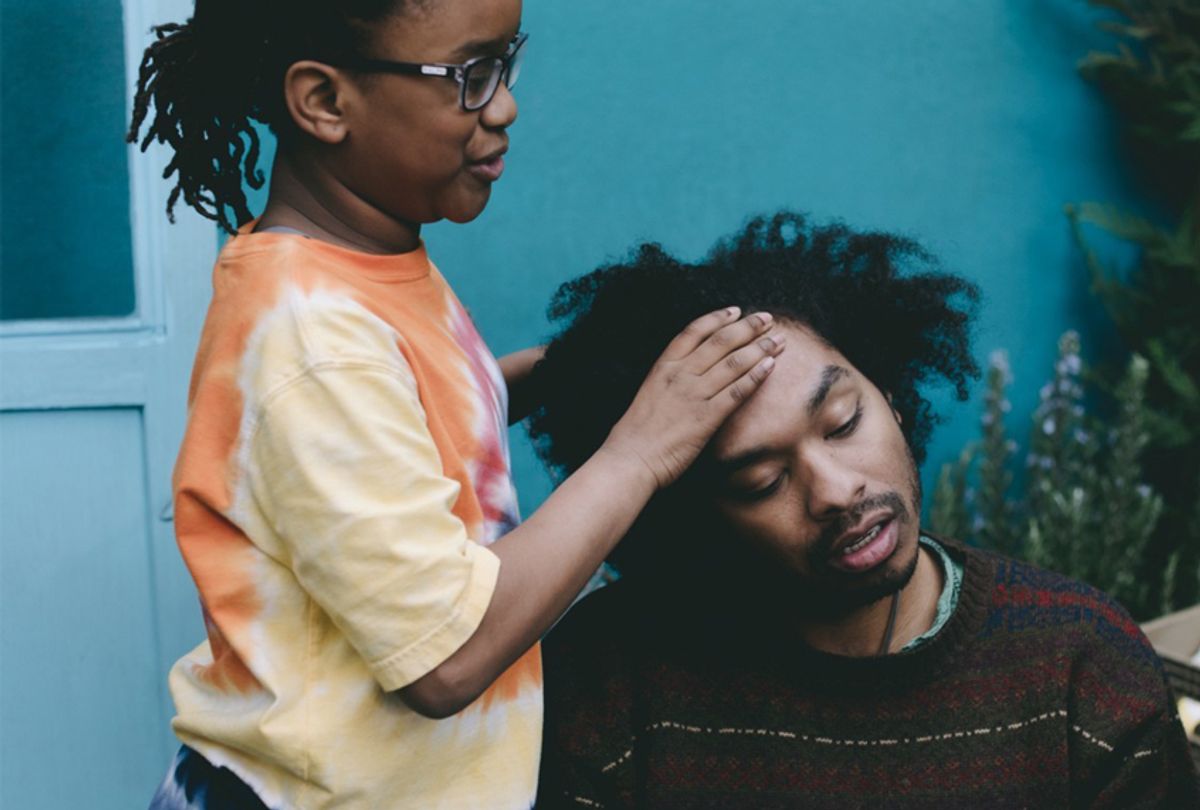 “Random Acts of Flyness” stars absurdity and the surreal. Every Friday, Terence Nance’s cinematic creation, a marriage of genres, art forms and concepts, reflects life, and black life in particular, as an endless journey through the unbelievable. Adventurous, but at all completely safe. Bleakness and confusion are constants in each episode, although Nance and his directors and writers keep them wrapped in colors and gorgeous creativity. If it’s beautiful, it’s because the show’s collaborators use aesthetics as weapons keeping anxiety at bay.

Above all, this series is so unpredictable that it defies loglines. At any moment, its narrative, if you can call it that, can switch from a tonal poem to a musical, from a video game to a game show.

A single episode may comprise a celebration of black women, critiques of misogyny, rape culture and the culturally subjugating nature of whiteness, nightmarish implications of sexual abuse, an examination of envy and an animated segment that casts a vegetable as an underdog.

The camera may follow a familiar protagonist through a metaphorical narrative that, suddenly, includes an A-list actor prominently cast in a small role.

Actually all of these things happen in this week’s episode, premiering at midnight – including that cameo by a very famous person. (Episode 1 gave us Jon Hamm in a faux-commercial critiquing “white thoughts”; the fourth installment features an Oscar winner identifiable first by voice.)

Every component contained in these half hours is intentional. Its placement on the schedule, though fitting, is coincidental. Thanks to our endless variety of video on demand choices, you can enjoy it whenever you want.

There is something hypnotic about experiencing it within that liminal space between the work week and the weekend, although when asked, Nance admits he wishes it were on earlier.

But people are watching it, no question — HBO renewed the series for a second season this week. Nance may have gotten some inkling of its success based on the feedback he says he’s received.

“People are excited” about it, he told Salon in a recent phone interview.  “People feel seen and heard; they seem to connect with it.”

In our conversation, Nance discussed the process of creating episodes of “Random Acts of Flyness” and its intentional usage of images to pose questions about American culture, our relationship to history and the black experience — and what it’s like to debut a provocative, consciously Afrocentric series whose first episode uses a “Mad Men” star’s popularity to make a commentary about whiteness. (This interview has been lightly edited for length and clarity.)

Let’s start with one of the main images that emerged on social media following  the first episode, at least in the Monday morning coverage of it. What I found really interesting was that out of everything that was in that episode, there was a lot of coverage that basically said, "Look, there's Jon Hamm”!

Can you talk a little bit about that? What was your reaction?

It plays to the power of celebrity, the power of the white male face that you’ve seen through many years. It's a very meta-textual idea, even just taken on the surface of what the concept of that segment in the show is. But I think that the idea of centralizing him, and the sort of retelling of what people saw, I think there's definitely two intentions at play. One intention is like, if somebody likes it, they want other people to go watch it, especially if they can't really explain it very well. It feels to people like an easy way to get people to watch it. Like, "Oh Jon Hamm's in it for a second, that's weird!" You know, whatever.

But . . . I've definitely seen people miss the point. The point of that segment is that almost nothing that happens in that whole section matters, because the idea is that it's essentially a distraction from what I should be focusing on in the pilot, and just focusing my mental and spiritual energy on.  That inability, or the difficulty with re-centering blackness . . . or just turning away from the incarnations of white supremacy as they play out in the media and how difficult it is, is allegorically rehashed. But then people can only see the part Jon Hamm was in.

Were you expecting that kind of reaction after that, or was that a surprise?

You know, I think I was very intentionally trying to de-condition myself from even having expectations.

When I watch it now, I kind of see formally why that is, because you know the part; it takes up so much real estate, you know? And the part that kind of turns it from a tide perspective is more the language that I speak with, formally, which is a little quieter and more subtle.

It doesn't hold as much attention for people as the language of pomp and circumstance of the previous segment. So I think that there's formal reasons why that happened but none that I formed expectations around.

Generally speaking,  every aspect of “Random Acts of Flyness” has specific artistic intention. And by that, I don't just mean in terms of the style, the messages, but even, you've said in previous interviews, it's airing at midnight. Which for a lot of different series, that's either a plus or a minus. But it works for this one, part of because of that dreamlike quality. Was that part of the plan, that this would be a midnight show? And did that impact any of the execution of it at all?

But I do think that there is something poetic about it ushering you to sleep, or it being the last thing you watch before you go to sleep. Not necessarily just to inspire, or interact with the idea of dreams, but I think it is about interacting with the subconscious. Even when I watch some of the episodes we're finished with, I see kinds of connections that my subconscious made, or other writers' or directors' subconscious made, that I never saw, or intended consciously.

So I think that idea of our subconscious communicating with the audience's subconscious is kind of poetic, in terms of something that you might watch right before you go to bed. But at the end of the day . . . I want as many people to interact with it as possible, who come to it from a variety of different backgrounds. I don't have any apprehension that it will be illegible to them emotionally.

One of things that I had noticed is how different all the different interpretations of each episode can be, as in, even what the themes are. When I've looked at it, I've seen that there are very distinct themes that aren't necessarily captured in the official episode descriptions. And you've intentionally incorporated a lot of historic references, without being specific, like you said, with that whole subliminal aspect of it. How did you and your collaborators choose each episode’s focus?

That's interesting. We definitely weren't creating from a theme-first perspective. It was definitely more conversations and ideas around characters, or just experiences or emotions that were really specific. We had so many pieces, you know, pieces of ideas, that I think the idea of themes is only kind of something that gets prescribed a little bit later, if at all.

We wanted to keep as much specificity in the moments, in the emotional moments, as possible, without feeling like we had any kind of allegiance to say something about a general subject, you know? And I think we also wanted to retain the complexity of what's going on just with the emotional beats, and experiences, so that there's not an over-articulation of like, "This is about patriarchy." Or, "This is the toxic black masculinity episode." "This is what stilted affection plays out as." There's no over-simplified, thematic element.

The pilot was made essentially over a year-and-a-half ago — it was just made a long time ago. There's just like a whole creative process that was a little bit more individual; it was a little bit more just me making it, like writing and directing it, and including some pieces [like] the piece that [series writer Frances Bodomo] had wrote, and kind of the small piece that Shaka [King] had made from some archival footage.

When we got into the writers' room, the pilot was finished, essentially. A few small elements got added to it later, but generally it was what it was: a kind of film, essentially. Then a year later, we sat down to make the rest of the season. And I think that a lot of that transition and energy, especially in the way that the gender expressivity has a subjective voice, is because the pilot is a bit more self-portraiture of my emotional state. But the rest of the season, starting with the second episode, is self-portraiture of this group of people.

A year passed between the pilot and the production on the rest of the episodes, right? Because a lot happened in that time, if I'm getting my timeline right.

How did everything that took place over that year impact the process, both in terms of what you decided to imbue into the experience and how you were working?

The pilot is very responsive to the news cycle of 2015-16 around then. And I think, you know, I was very angry . . . I am angry, but I think I was in an acute state of anger then. I think Frances was when she made ‘Everybody Dies.’ And I think that the acuteness of that anger is embodied in that emotional response to the news cycle is present, definitely present in some way in the pilot.

That also meant that when we sat down to make the rest of the season, starting with episode 2, we started from a place of having turned away from the news cycle in a way to re-center rituals that we do. To think about what ails us outside of this sort of constant onslaught of the trauma of white supremacy and hyper-violent patriarchy and hyper-capitalism that exists daily in the news cycle. Obviously you can't ignore it totally, but what does it mean to turn away from it, turn your focus on ourselves in a way?

In what way did turning away transform what you may have envisioned versus what we're seeing in the series?

The thing about turning away is you can’t do it forever. I think that a part of what this show is, is about the vacillation. Something that you have to do every day, really, it takes maintenance. In the second episode, there's this running idea of the shadow self as a kind of space that you know men of the African diaspora explicitly over-indulge in, and are constantly using as a kind of emotional core to express this violent and aggressive patriarchal behavior towards the women and their families and around them and even at each other.

That that is part and parcel to what's going on in the larger media culture with white supremacy. It's not separate. It's not, like, a totally different thing from the fact that the president is on record as having talked about sexually assaulting people. So I think that the idea that there's this sort of border between the systems of oppression that ail us and that we can just turn away, and like, "it's all a party over here!" is not what it is. It's much more fractal and complex. What the show has become is a portraiture of how complex that system is, if that makes sense.