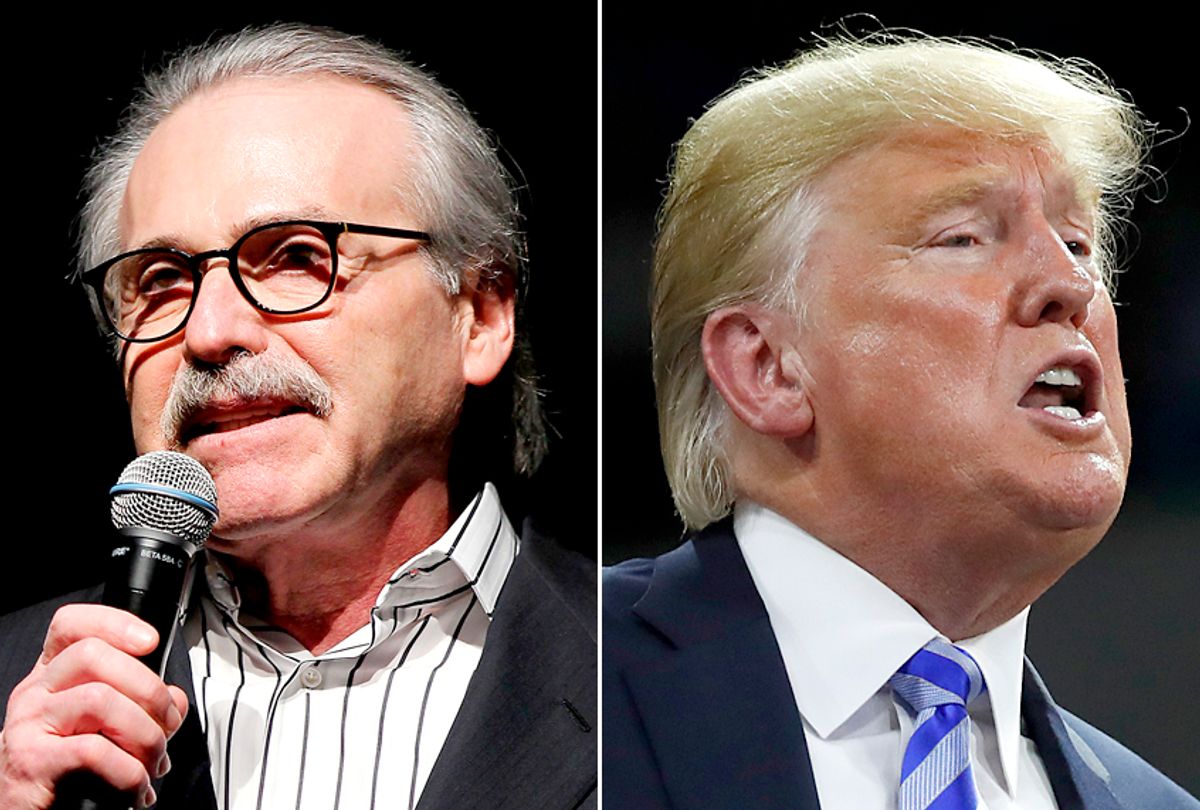 In an ironic twist, the president who regularly smears his media critics as "fake news" may wind up being taken down by a newspaper that quite literally peddles fake news.

Because Trump's former lawyer Michael Cohen has claimed that Trump was aware of the payments before they were made and directed Cohen to make them, this makes Pecker a potentially crucial source of information. As the Times explained, Trump and Pecker have a longstanding friendship:

Mr. Pecker has been close to Mr. Trump since the 1990s, and has served as a protector dating back to before the days when Mr. Trump was the host of his reality show, “The Apprentice.” After Mr. Trump became president, he rewarded Mr. Pecker’s loyalty with a White House dinner to which the media executive brought a guest with important ties to the royals in Saudi Arabia.

Because of both this friendship and the money that Pecker saw could be made from promoting the Republican presidential candidate, Pecker used the "National Enquirer" as a forum for promoting Trump's campaign. In 2010 the Enquirer began running articles that encouraged the idea of a Trump presidential campaign, according to the Associated Press. In doing so, it referred to a website that had been co-created by Cohen back when he was Trump's lawyer, fixer and confidant. As Trump began to focus on questioning Obama's birthplace and American citizenship in 2011, the Enquirer did likewise, with Cohen encouraging them to do so all the while.

By 2016, the Enquirer was regularly running stories that heralded Trump as a potential savior for America and disparaged his various political opponents, most notably Hillary Clinton. These headlines ranged from claiming that Clinton only had six months to live and that she had gained 103 pounds to claiming in the Globe (which is also run by American Media Inc.) that she had suffered two strokes during the course of the presidential campaign, according to ABC News.

Yet one of the most important functions that the Enquirer served for Trump was engaging in a catch-and-kill policy when it ran across negative stories about him. This is where the alleged affairs with Stormy Daniels and Karen McDougal come into play: Because these stories threatened to leak and derail Trump's presidential campaign, the Enquirer purchased the rights to the stories and then sat on them so that they couldn't come out and hurt Trump's candidacy. It was widely viewed as a quid pro quo, one in which the Enquirer would expect favors from Trump in return for helping him out.

It also played a role in which the allegedly illegal payments were made to Daniels and McDougal in the first place.

It seems that the catch-and-kill stories about Trump were kept in a giant safe with other damning stories about both the future president and other celebrities, the Associated Press reported:

The Trump records were stored alongside similar documents pertaining to other celebrities’ catch-and-kill deals, in which exclusive rights to people’s stories were bought with no intention of publishing to keep them out of the news. By keeping celebrities’ embarrassing secrets, the company was able to ingratiate itself with them and ask for favors in return.

But after The Wall Street Journal initially published the first details of Playboy model Karen McDougal’s catch-and-kill deal shortly before the 2016 election, those assets became a liability. Fearful that the documents might be used against American Media, Pecker and the company’s chief content officer, Dylan Howard, removed them from the safe in the weeks before Trump’s inauguration, according to one person directly familiar with the events.

It was unclear whether the documents were destroyed or simply were moved to a location known to fewer people.

The Enquirer's purchase of the McDougal story was the subject of at least one of the secretly recorded conversations between Trump and Cohen. According to the Associated Press:

In July, Cohen released an audio tape in which he and Trump discussed plans to buy McDougal’s story from the Enquirer. Such a purchase was necessary, they suggested, to prevent Trump from having to permanently rely on a tight relationship with the tabloid.

“David gets hit by a truck,” Trump says.

One person who has been outspoken in her commentary on the Enquirer's bias against Hillary Clinton is the former Secretary of State's daughter, Chelsea Clinton.

"I’d missed the lung cancer cover, the stroke story, the one about my mom @HillaryClinton’s hitman (possibly my missing alien sibling?!) and goodness, I think all of them actually. As always, thankful for my mom’s enduring health, grace, grit & goodness," Clinton posted on Twitter on Thursday.

One of the more intriguing developments in the Trump-Russia scandal is just how much has come out that doesn't directly pertain to Russia itself. Obviously, the future president's alleged affairs with a former porn star and former Playboy model, while unseemly, is not in and of itself illegal, or for that matter in any way tied to his relationship with a foreign despot like Russian President Vladimir Putin. Nevertheless, in order to keep this scandal out of the public eye, Trump and his associates may have committed a real crime through their cover-up — one that has come out, in part, because of the attention being paid to the Trump-Russia accusations.

It was also reported on Friday that Allen Weisselberg, the Trump Organization's longtime Chief Financial Officer, was granted immunity by federal prosecutors for providing information about Cohen hush-money payments.

A look at the similarly homophobic policies of Trump and Putin.