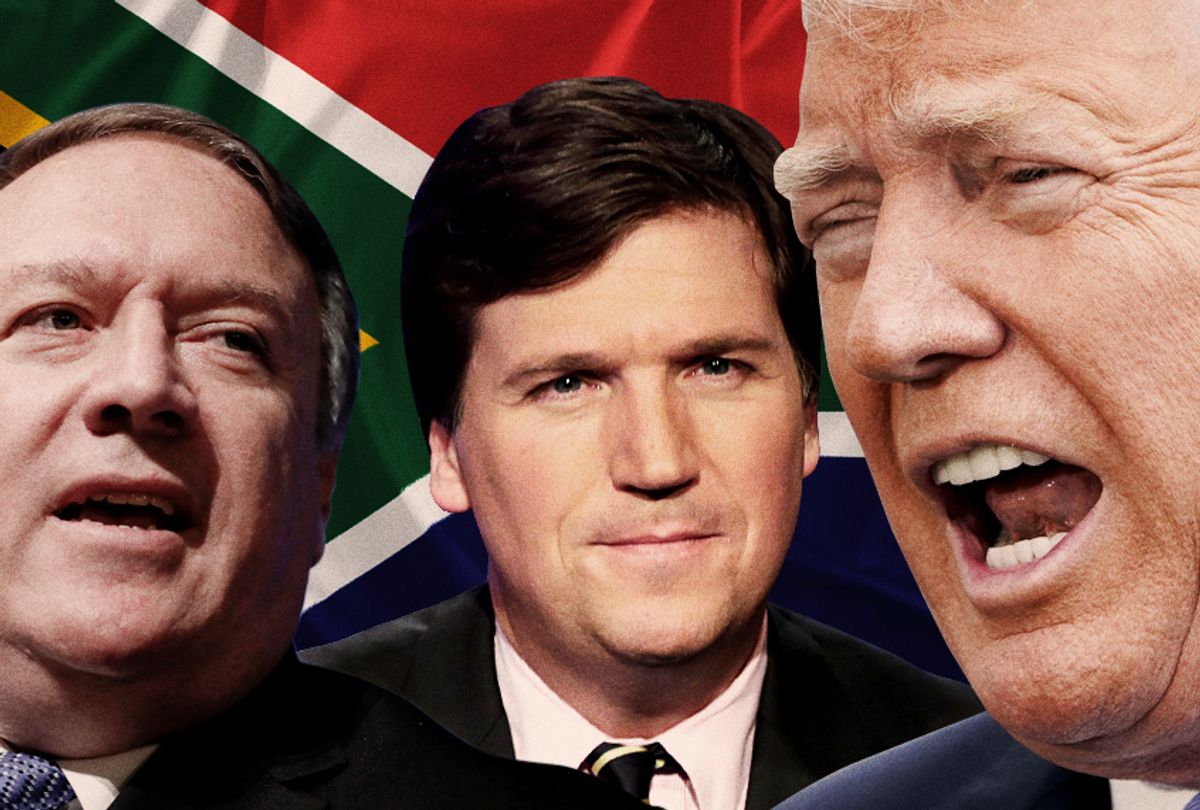 Does Donald Trump have a wish list of white supremacist dreams, hopes, desires and wishes that he is determined to fulfill? The answer would appear to be yes.

On Wednesday evening the president took to his preferred means of communication and made the following pronouncement:

I have asked Secretary of State @SecPompeo to closely study the South Africa land and farm seizures and expropriations and the large scale killing of farmers. “South African Government is now seizing land from white farmers.” @TuckerCarlson @FoxNews

Why did Trump address this so-called issue at this time? And where do such specious and dangerous claims come from?

Fear-mongering about the fate of white South African (and Zimbabwean) farmers, and how they are supposedly the victims of racist violence by "blacks," is a set of talking points Trump could have taken almost verbatim from white supremacist websites and similar sources.

Earlier in the day, Fox News' Tucker Carlson -- who repeats white supremacist talking points as a matter of routine -- had featured a segment on South Africa's white farmers and how they are allegedly being "victimized" by black people. This is another example of how Trump's tweets tend to parrot whatever he has recently seen on Fox News.

Are these claims true? They are not. Carlson's report, like the white supremacist sources from which it was drawn, lacks historical context.

As the Washington Post explains, this issue "stretches back to the early 20th century, when South Africa’s Natives Land Act of 1913 stripped black people of the right to own land outside specific plots set aside for them. The restriction tightened during the apartheid era, as the governing National Party created desolate 'homelands' for black people." Although a legal framework for land restitution emerged with the end of apartheid in 1994, the process has been "slow and riddled with bureaucratic uncertainty."

The South African government also condemned Trump's comments. It said, “South Africa totally rejects this narrow perception which only seeks to divide our nation and reminds us of our colonial past. South Africa will speed up the pace of land reform in a careful and inclusive manner that does not divide our nation.” Patrick Gaspard, the U.S. Ambassador to South Africa for the Obama administration, also rejected Trump's claims:""The President of the US needs political distractions to turn our gaze away from his criminal cabal, and so he's attacking South Africa with the disproven racial myth of 'large scale killings of farmers'."

There can be little doubt that Trump has heard arguments about the unfair treatment of white people in South Africa and around the world from advisers such as Stephen Miller, Michael Anton and Steve Bannon.

Collectively, under the banner of the "alt-right" (or behind whatever other mask they choose) and its duplicitous claims about "populism," "economic nationalism" and the defense of "Western culture," such people channel many of the views and beliefs of white nationalists and other white supremacists.

In total, the racist narrative about the fate of white farmers in post-apartheid South African is a lie.

In the Huffington Post, Jessica Schulberg and Akbar Shahid Ahmed explain that 25 years after the end of apartheid, South African whites (about 8 percent of the population) still own 72 percent of privately-held farmland, while about 10 percent of the total population -- overwhelmingly but not exclusively white -- control 90 percent of South Africa's wealth.

The post-apartheid government has bought up land for redistribution and assigned it to new owners, on the grounds that many were descended from black South Africans who unjustly lost their property during the colonial era and white rule.

But the idea of allowing the government to confiscate land without compensation has gained traction amidst public dissatisfaction with the governing African National Congress party. In February, the South African Parliament called for constitutional reform that might permit such initiatives to boost black land ownership.

Some groups representing white farmers have presented the idea of “land expropriation” as evidence of anti-white racism, or have claimed that "ongoing attacks on white farmers are racially motivated rather than part of the country’s broader problem with violent crime." Schulberg and Ahmed report that most observers say "it’s unlikely that commercially vital white-owned farms will actually be seized and suggest the dispute is being exaggerated for political reasons."

Meanwhile the Guardian's Jason Burke debunks the claim that white farmers are being singled out for racist violence, writing that murders of farmers are at a 20-year low, and have declined consistently since the late 1990s. These lower numbers "contradict recent reports in Australian and other western media describing white farmers in South Africa facing 'a surge in violence,’" he writes, adding that dozens of nonwhite farmers have also been killed in recent years.

Perhaps as president Donald Trump's inner circle betrays him (Michael Cohen) or are prosecuted and convicted by Robert Mueller (Paul Manafort), he will retreat to his most effective strategy to date: white racism, white victimology, and white grievance-mongering. Ultimately, Donald Trump wants to be the King of All White People. Unfortunately, there are many potential followers and believers for Donald Trump's white supremacist appeals.

New research suggests that at least 11 million white Americans hold what could be fairly described as white nationalist beliefs. Other research indicates that as many as 22 million Americans are sympathetic to Nazism. It has been repeatedly shown that Donald Trump won the White House not because of "economic anxiety" among the white working class, but largely as a result of overt racism and racial resentment.

Last Sunday, former White House aide Omarosa Manigault Newman, Trump's onetime protégé in the dark arts of reality TV and celebrity culture, told MSNBC viewers that her former boss "wants to start a race war in this country." It is a given that nothing Omarosa says can be fully trusted. But on this count she may very well be right.