A tale of two pasta dishes and one huge reunion 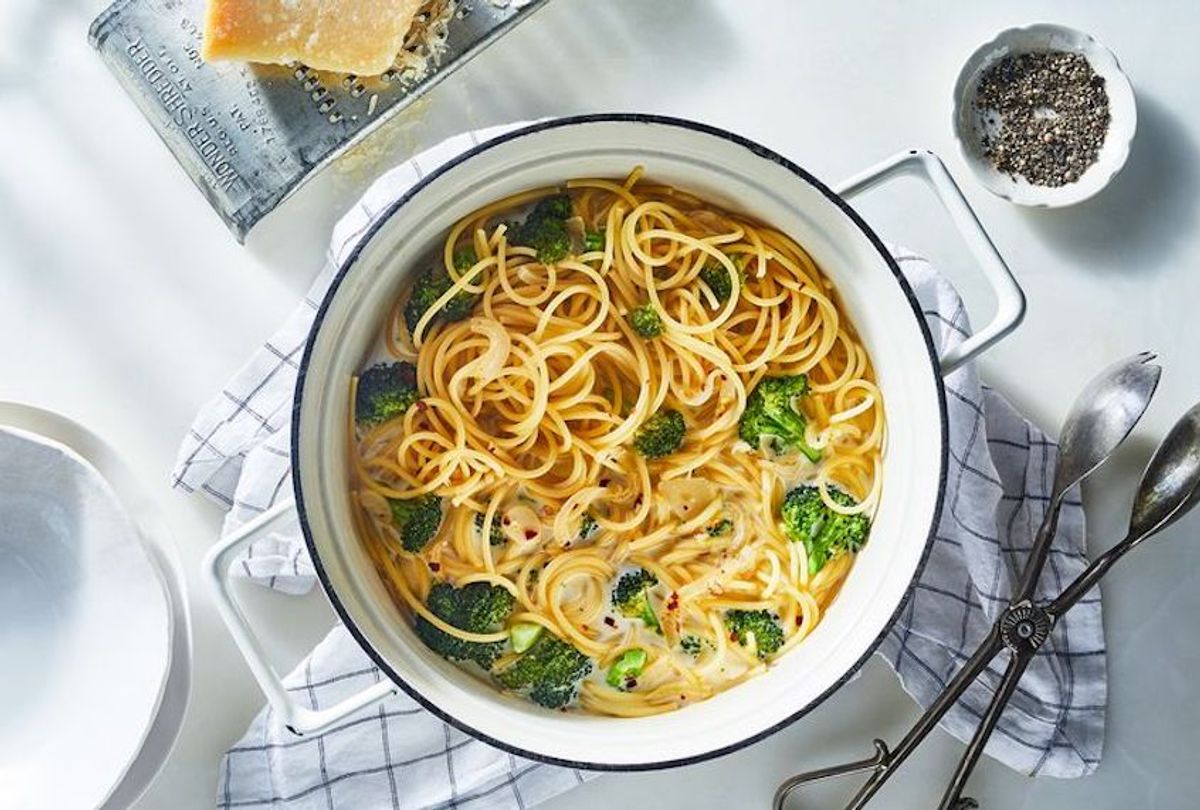 I hadn’t seen my family in four years. My parents live in a small town in Korea called Pohang, known for its steel, and my brother in Seoul. And I've been in New York trying to make something of myself.

A lot has happened to me since I last saw them: I graduated culinary school and started a new job. My family was (and still is) very confused by the whole chef thing, but once I told them that my graduation ceremony would take place at Carnegie Hall, they couldn’t stop talking about it. And of course, wanting to see me walk, they decided to fly 20 hours across the world to visit me. This would be our first family reunion since 2014.

The pressure was on. Awaiting their arrival, I started to realize that four grown adults would be squeezing into my tiny studio apartment for 12 grueling days. That for the first time in four years, my family would see the new life I've built for myself here in America. I started to get nervous. What would they think? How was I going to feed them?

When I went to pick up my parents and brother at JFK, it dawned on me, the weight of finally being face to face with my family after years of communicating solely over FaceTime. “It’s been so long since I touched you, James!" my mom said, holding my face. "I missed my son so much."

Knowing that they'd just sat on a plane for hours, I wanted our first meal together to be extra special. We went back to my apartment and, per my mother's request for pasta, I made my signature dish of penne, rosemary-infused oil, charred Italian sausage, and lots of Parmesan cheese—a weeknight go-to for me. This pasta was, in many ways, a reflection of various flavor-building techniques I had learned in culinary school. I wanted them to taste it, to see what their new chef son had learned during our years apart. Aiming to impress, I plated the pasta with extra Parm and garnished with fried rosemary, a flourish of freshly cracked black pepper.

As soon as my mom saw the pasta, the first thing she said was: “Oh, this isn’t what I was hoping for...but it looks delicious!”

I was so disappointed. “Did you have something specific in mind?” I asked. I wanted that first meal to be perfect and impressive, proof that the sacrifice of four years apart was worth it. It was imperative that my mother enjoy it.

She took a bite and smiled. “This is delicious, but I wanted that other thing. It was white and creamy."

"White and creamy?" I asked.

“You were eating it once while we were FaceTiming; I wanted to reach through the screen and taste it! But it’s fine. This is delicious, too.”

I’d been aware of Korea’s interpretation of Italian — and, by extension, American — pasta. To many older Koreans, especially those of my mom’s generation, "pasta" is a dish with long noodles, pretty much always spaghetti, drenched in either tomato or cream sauce. Koreans love their cream pastas. Now that I think back on it, oil-based pastas, like the one I had just made, were not something my family would’ve ever associated with pasta.

I remember when my mom and I tried carbonara for the first time at a restaurant in Korea. When the dish arrived, we thought it was spaghetti in a creamy soup, the type of creamy potato soup sold in cans and even in powdered form, with a few slices of bacon and a sprinkle of parsley. It was brothy, ideal for sopping up with crusty bread, not unlike how you’d eat white wine–steamed mussels.

So I thought all creamy pasta dishes were meant to be brothy until I came to America and tried an authentic, cheesy, broth-lesscarbonara. My mom, on the other hand, still associated pasta with that soupy version we once had — and after a 20-hour flight from Pohang, it was the comfort food she was apparently craving over my "discomfort" food of rosemary, spicy sausage, and oil.

12 days went by — mostly without a hitch. I took them to all of my favorite restaurants, what I'd considered the classics, like Keens Steakhouse, Spicy Village, and every "cool" place I could think of. They didn't like any of them, of course. All they wanted to eat was Korean food. It seemed that all my years of expanding my palate here in America, becoming excited about new cuisines outside of my own, wasn't translating for my family, who'd lived on that tiny Korean Peninsula their whole lives.

There were other bumps. I realized that, in all those years facing my family through a phone screen, I was able to control the narrative, only revealing to them what they wanted to hear and see, never showing them my cramped studio apartment or the meager checks I was making at work. But during their visit, I couldn’t hide any of it. My life was on display for them to pick at. My mother began nagging and pointing out my flaws (just like any mother would do). There were many moments that I felt like I was a disappointment to my parents, from little things like taking too long to get ready, to bigger things like not thinking about what they wanted to do rather than what I wanted to do.

Was I being selfish? I just wanted to show them the parts of my new life that I was excited about, but the way they resisted each bullet point on my itinerary, I couldn’t help but feel that I was letting them down.

It was the final morning before I was to drop them off at the airport. The last supper. I felt the pressure to make this farewell meal perfect, like the ending credits of a sad movie where a family has to spend most of their lives on separate continents. I didn’t have much time left or any particular ingredients in my fridge. I had a handful of random bits and bobs like broccoli, lemon, and Parmesan cheese.

Then, I remembered: my mom’s request for a creamy pasta that I failed to deliver.

I put on the water for spaghetti and started cooking from taste memory, recalling our first time trying pasta with cream at that restaurant in Korea. No recipe. When describing that comforting dish, my mom used words like "brothy, creamy, and not too buttery," so I concentrated on recreating those flavors from my pantry. I used lots of garlic and red pepper flakes to add spice to the dish. I mixed butter and olive oil to bring more substance to the base. Broccoli and onion were the only vegetables I had, so I added those to the pot; they added a nursery savoriness. It smelled good. I recalled that many Koreans would use milk to create that creaminess — not cream — so even though I would never have thought to add milk to pasta myself, I poured it into the pot with everything else.

The thing is, pasta with milk makes so much sense. When you have something as starchy as spaghetti, it thickens the milk into a brothy sauce that you can take as far as you'd like: reduced until very thick and creamy, or a bit soupier and brothier, like my mom likes it. Koreans love soup. The thing I came up with was more ramen-like then pasta-like, but according to my mother's vernacular, it was, for all intents and purposes, pasta.

“Ah!" my mom shouted as she saw the dish. "It looks similar to what I was craving!” Mother's Approval, on a scale of 1 to 10: 10. She took a sip of the broth first, with a soup spoon (as I knew she would). And she let out a big, consonant g-ahhh as Koreans often do after drinking something gosohae, or tasty-nutty. She proceeded to slurp the spaghetti and smiled again. “This is it! This is what I wanted!” She scarfed down the milky, brothy pasta in mere seconds — as if they were ramen noodles she didn't want to wait to get puffy — and we rushed to the airport.

This airport goodbye was especially hard. The four of us just stood in front of the terminal, holding each other in a huddle, weeping quietly. Saying goodbye is never easy, but this time was brutal, namely the part where I had to come home to an empty apartment. I could still see them all in my head: my mom sitting on the couch, my brother on the computer, and my dad playing music on my bed. My tiny studio, crowded with luggage and the best people in the world for 12 days. It felt so empty after all that.

And then I saw my mom's empty pasta bowl in the sink.

I was so frantic trying to cook that last meal, I realized I didn't even get to taste it properly. I walked over to the stove and saw that there was a little leftover in the pot. I took a bite. It was comforting, the flavors reminiscent of a traditional creamy Italian pasta, like Alfredo. But with the spice and garlicky savoriness infused into that creamy broth, it reminded me a lot more of Korean soup, or ramen. I could see why my mom preferred this. It reminded me, too, of how much I'd changed and grown over the years, not just as a chef but also as a son and a brother.

So much happens to us when we're apart from the things that give us comfort. You forget the little things the soul needs. Now, whenever I find myself trying too hard in the kitchen or overthinking a recipe, I'll think back on this humble, simple broccoli spaghetti, and how it fed the people I love most.