John McCain's thumbs-down, and his defiance of Donald Trump, should stand as his final testament

I have health care today because of two leaders: Barack Obama and John McCain, who stood up for American values 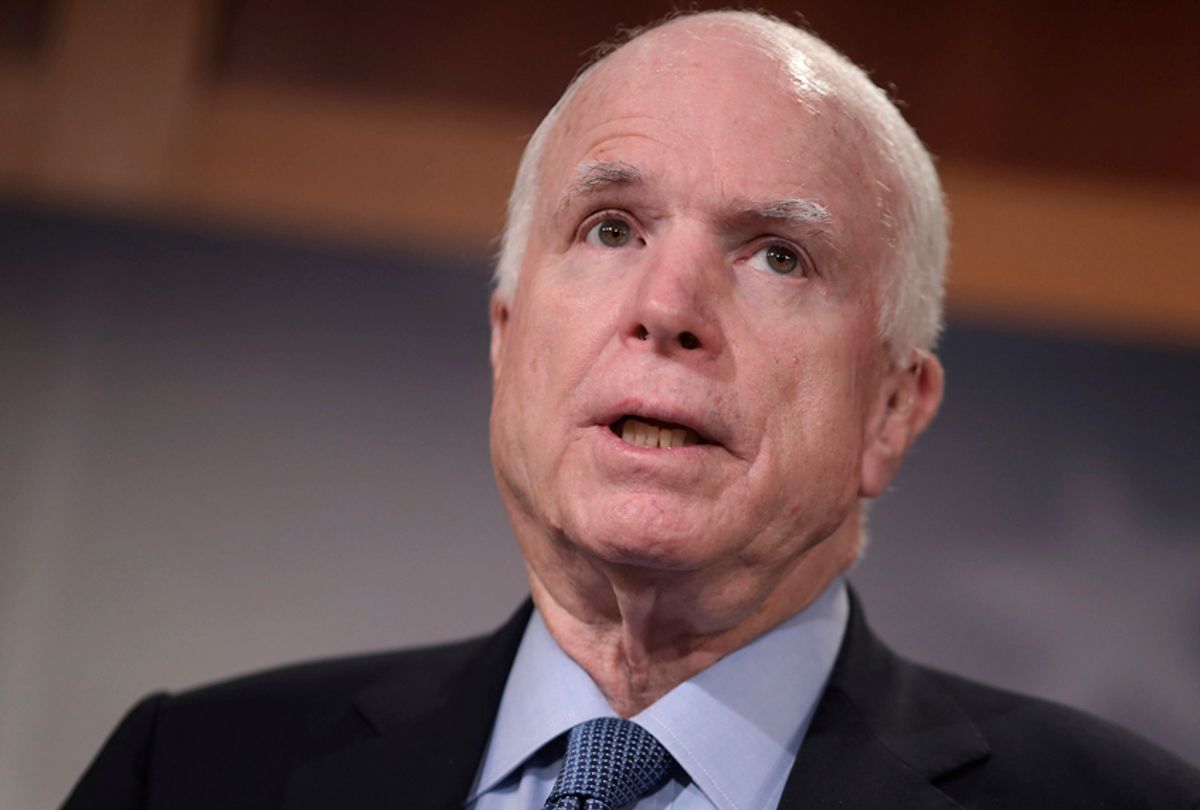 Donald Trump will never understand men like John McCain. For a morally corrupt, conscience-free person like Trump, honor and sacrifice are traits held closely by idiots and suckers who refuse to take the cynical shortcuts to success -- sashaying through loopholes and exploiting paths of least resistance -- that have been Trump’s modus operandi for decades.

Seen through Trump’s beady eyes, Americans like McCain are space aliens, sent to disrupt criminal enterprises while simultaneously upstaging him with acts of bipartisanship, selflessness and patriotism. “I like heroes who don’t get caught,” Trump infamously said of McCain, illustrating his disdain for anyone who has faced struggles while pursuing noble ends. Trump might as well have said, See what happens when you do stupid sh*t like volunteering to fight for your nation? Sad!

This grotesque sense of superiority and resentment surely extended to Trump’s view of McCain’s illness.

Throughout the senator’s struggle with glioblastoma, Trump relentlessly mocked McCain’s historic thumbs-down vote against the so-called “skinny repeal” of the Affordable Care Act (ACA), illustrating the president’s complete absence of character as well as his petty vindictiveness, even as an American hero who endured five years in a cage -- when he wasn’t being tortured -- withered away from the harrowing last stages of terminal cancer. It wouldn’t shock me at all to discover Trump privately believes McCain’s cancer arose due to some kind of physical weakness rather than random chance, augmenting Trump’s false sense of superiority.

I’m sure Trump also thought McCain’s cancer was somehow so unfair to Trump, stealing his spotlight and highlighting the vast differences in character between the two, making Trump look small. McCain, therefore, was repackaged as an enemy of Trumpism, to the cackling delight of his rally-going loyalists. Sadly yet conveniently, there’s video footage of every heinous remark and the ignorant guffaws from the Red Hats that followed. Posterity will not be kind to these ghoulish bastards.

Trump made a point of routinely sucker-punching McCain during his end-of-life care, even though the Arizona senator might have saved countless millions of American lives with that thumbs-down gesture on the Senate floor. That would include the lives of Red Hats who refuse to admit they have benefited from the ACA and the failure of the repeal process.

McCain’s Senate vote in late July of 2017 is how I will choose to remember him.

And that’s not just because I still have health insurance due to the continued existence of Obama’s ACA. I choose to remember McCain for being a bigger man than most, insofar as he cast the deciding no vote in the face of Mitch McConnell, Donald Trump and the rest of the Republican Party, including the bug-eyed fury of the conservative entertainment complex, thus preserving Barack Obama’s legacy (at least for the moment).

It was McCain’s vote that locked down the signature achievement of the former president who had soundly defeated McCain in 2008. Imagine Trump doing the same for a hypothetical President Hillary Clinton. (When you’re done laughing, keep reading.)

The cynical view might be to suggest McCain’s goal was solely to undermine Trump and McConnell, rather than to stop the repeal of Obamacare. While that could be the case, and while the Obama-era Democrats did all of the heavy lifting to pass the ACA in the first place, it was McCain who further altered the course of history when he so dramatically killed the repeal process once and for all, hammering the final nail into the coffin of a seven-year GOP crusade to strip 30 million Americans of their newly-acquired health care. It’s undeniable that the ACA would be mostly if not entirely dead if it were not for John McCain.

This is not to suggest McCain was a flawless public servant worthy of Lincoln-like reverence. That said, I’m not interested in demonizing his legislative record today, nor am I interested in listing the various reasons why I didn’t want him to be president in 2008 (with a certain then-governor of Alaska at the top of the list). In other words, yeah, insert the obligatory “I disagreed with him on the issues” caveat here. Suffice it to say that McCain fought hard to win the presidency, as anyone would, but once the votes were counted and the country had moved on, he returned to carrying on a brand of politics that’s rapidly dying in the age of another potentially terminal disease, the widespread syndrome, Trumpism.

With McCain out of the way, Trumpism has gained yet more ground in its fight to kill off so much of what we (used to) cherish, and Trump knows it. Personal flaws and voting record aside, McCain represented a slate of gravely endangered American values: respect for the rule of law and regular order; respect for the dignity of public service; respect for the spirit of compromise at the center of our Constitution and so much more. Those are values that ought to be universally held, irrespective of party. So even as some of us are reliving the times when McCain pissed us off, I believe we’re obliged to acknowledge and embrace his embodiment of those values above all else, if for no other reason than to make sure they’re preserved even as they teeter on the brink of extinction.

Trump ascended to the presidency by attacking and renouncing those values. Consequently, this current president and his fanboys can only see McCain as a fly in the ointment, an obstacle in the path of their grievance-fueled jihad against everything that McCain, the Obamas, the Bushes, the Clintons and so many others represented in their respective times. Again, say what you will about their politics, but it’s their American values -- your American values -- that Trumpism seeks to destroy. These are the parameters of this Trump crisis and the fight to save democracy, and John McCain’s thumbs-down last summer was a profound victory along the way.

Personally speaking, I only have health insurance because of the ACA and the political strength of Barack Obama and his Democratic allies. I was only able to keep that health care because of the political strength of Obama’s former opponent, John McCain. More than that, I’ve learned from McCain that it’s okay to defy your “team” in order to do and say what we believe is right. I’ve learned that it requires a special kind of courage to stand up to all the politicized shrieking, and even the relentless torture of our enemies, in order to defend our American values. For all of these things, I will be forever grateful. Thank you, senator.