Palin was one of the first to say she was duped for Showtime's "Who Is America?" but her interview never aired 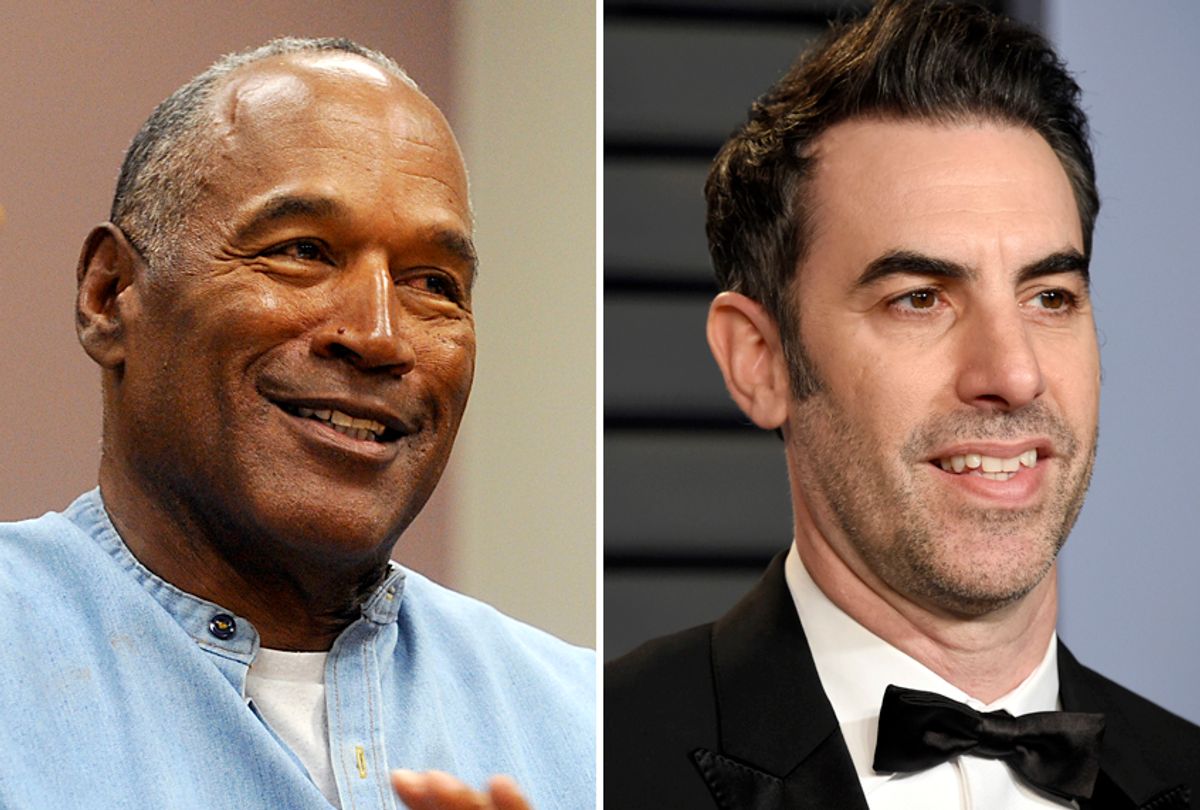 Sunday night's episode of Sacha Baron Cohen's Showtime series "Who Is America?" was the finale, and former Alaska governor and candidate for vice president Sarah Palin was noticeably absent. She was one of the first public figures to come forward saying she was tricked by Baron Cohen for his new series, and as the season went on with no Palin appearance, it seemed probable that Baron Cohen had decided to save her interview for last.

It's not clear why Palin's interview wasn't included — the show hasn't said — but Baron Cohen did give Palin a shoutout in the closing credits as "Special Publicity Consultant (Inadvertent)."

Palin may have been able to have her segment shelved, but Baron Cohen may also have simply decided to keep his show fresh for viewers, since so many of the show's targets exposed themselves ahead of time, which kills any element of surprise. However, the finale ended with a whole new subject, newly freed O.J. Simpson, who was released from prison last year after serving time for armed robbery and kidnapping.

For his chat with Simpson, Baron Cohen deployed his Italian socialite character Gio Monaldo, with the clear intent of getting Simpson, who was acquitted of the 1994 murders of Nicole Brown and Ron Goldman but later lost a $33.5 million wrongful death judgment in a civil suit brought by their families, to confess to the killings.

When the socialite's girlfriend entered the room, he tried to explain who Simpson is to her by referencing his work — football player for the Buffalo Bills, actor in "The Naked Gun" — none of which she recognized. But when Baron Cohen imitated murdering her, then she recognized Simpson immediately and acted starstuck: "So nice to meet you!"

"She knows that, oh Jesus," Simpson replied, shaking his head. "Help me, help me."

Simpson remarked how "gorgeous" Baron Cohen's girlfriend was several times, to which the host responded, "She's gorgeous, but sometimes I want to kill her, you know?"

Simpson did object and appeared visibly uncomfortable, but not enough to get up and leave. He high-fived Baron Cohen when he said he wanted to take his girlfriend in a helicopter and drop her over the Grand Canyon. "Stop, stop," Simpson said, laughing.

Baron Cohen suggested other ways he could kill his girlfriend and get it away with it, a conversation which Simpson contributed to. "If I do, you introduce me to [Johnnie] Cochran?" he asked Simpson. When Simpson reminded him that he's no longer living, Baron Cohen said: "What, you didn't kill him too, did you?" Both the host and Simpson laughed.

In attempts to get Simpson to confess, Baron Cohen explained that his business partner "is obsessed about what happened the night with the wife," adding that he wanted Simpson to tell him what really happened.

"What wife?" Simpson replied. "The one you shot," Baron Cohen fired back.

"Well, first of all, she wasn’t my wife," Simpson said, in a hurry to dispel that part of the question before the murder accusation. "We had been divorced and separated for two years, and second, I didn't do it."

Baron Cohen reframed his ask, saying his business partner wants to know "how you got away with it." Simpson disputed, "Hey, hey, I didn’t get away with nothing."

After Baron Cohen told Simpson how he did not kill his wife either, but rather "she got depressed and she put herself into a bag full of rocks and then managed to drag herself into the sea," he said.

"You weren't charged, so good for you," Simpson replied.

"Me and you, we got something in common," Baron Cohen said. "We both, how you say, lady killers."

"No, I didn’t kill nobody," Simpson said, laughing and shaking his head simultaneously.