Roseanne will likely be dead in "The Conners" spinoff, according to John Goodman

In a new profile, John Goodman reveals more about how "The Conners" will move forward without Roseanne Barr 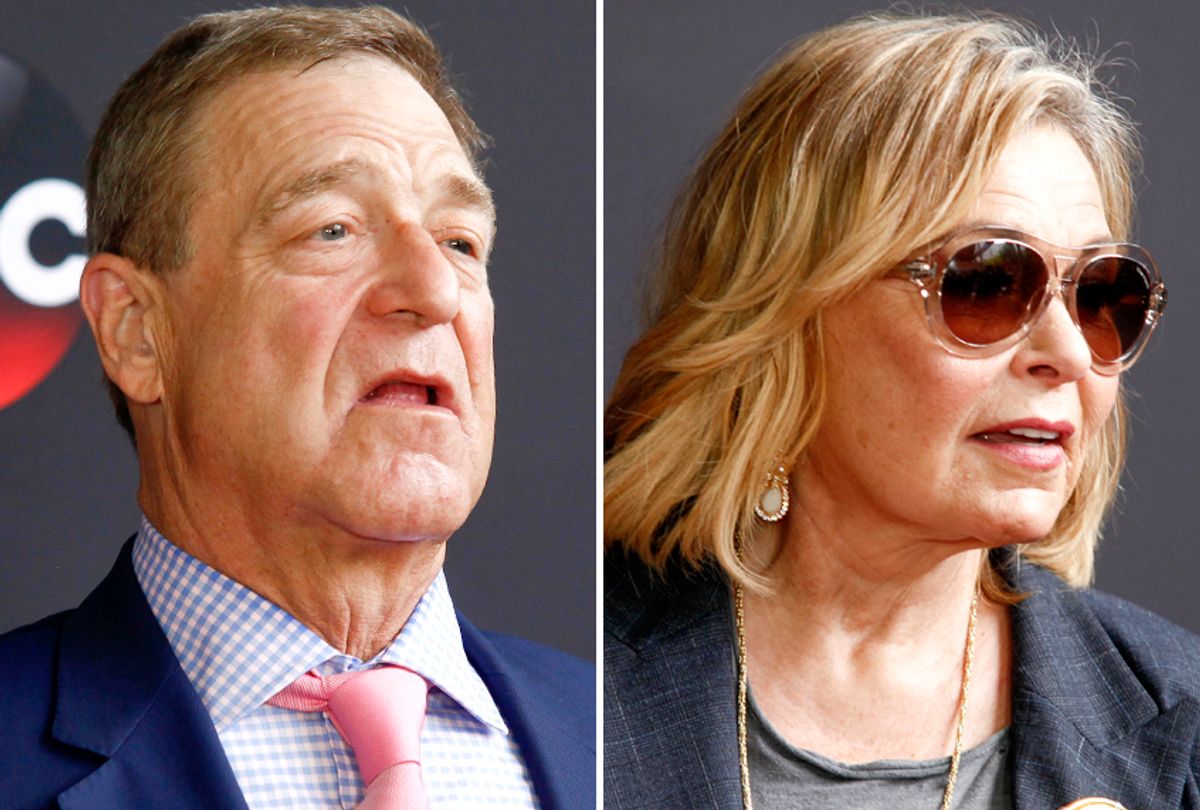 When ABC announced a "Roseanne" spinoff, it was clear that the show was meant to capitalize off the popularity of the original series and the reboot — minus original star Roseanne Barr, whose racist tweets led to the premature ending of ABC's successful revival. But it was less clear how the network planned to handle the absence of the family's matriarch from its spin-off.

In a profile published in U.K.'s Times Sunday, John Goodman, who plays Dan Conner, seemed to reveal the fate of Roseanne as he told the outlet that his character will "mopey and sad because his wife’s dead."

In May, ABC fired Barr and canceled her namesake show after she posted a racist tweet about former Barack Obama aide Valerie Jarrett, who is an African-American woman. ABC Entertainment President Channing Dungey described the tweet as "abhorrent, repugnant and inconsistent with our values."

Barr has insisted that her tweet was misinterpreted, as she did not know that Jarrett was black, and while she has since apologized for the tweet, Barr also continues to assert that she is not a racist. It's a point Goodman agreed with. "I know, for a fact that she’s not a racist," he told the Times Sunday. Goodman added that he was "brokenhearted" and "surprised" at the cancelation of "Roseanne," and said, "That’s probably all I should say about it."

Goodman's defense of Barr is unique, as several cast and crew members spoke out to condemn Barr's tweet and applaud ABC for canceling the show.

Co-star Sara Gilbert, who plays Darlene Conner, wrote on Twitter in May: "Roseanne’s recent comments about Valerie Jarrett, and so much more, are abhorrent and do not reflect the beliefs of our cast and crew or anyone associated with our show. I am disappointed in her actions to say the least."

Before ABC had announced the show's cancelation, Wanda Sykes, who worked as a consulting producer, tweeted that she had quit "Roseanne." Similarly, Emma Kenney, who plays Roseanne's oldest granddaughter Harris, said before the show was canceled that she was preparing to leave herself. "Bullies will NEVER win," she wrote on Twitter. And Michael Fishman, who plays D.J. Conner, posted a long message to Twitter, saying he "condemned" Barr's statements "vehemently" and called them "reprehensible and intolerable."

Barr was particularly upset with her former co-stars for these statements, and she responded to Fishman and Gilbert directly on Twitter, saying that they threw her under the bus.

"Roseanne" had returned to ABC in March, three decades after it first aired, and with its original cast, including the show's creator Barr, Goodman, Laurie Metcalf, Lecy Goranson (originator of the Becky role) and Gilbert. The revival was widely viewed, marking the network's first No. 1 show in 18 years.

The show had a planned second season for this fall, but it will be replaced by "The Conners" spinoff. Goodman, Metcalf, Gilbert, Fishman and Goranson are all slated to return, but ABC said in June that "Roseanne Barr will have no financial or creative involvement in the new series."

For "The Conners," which will take the same time slot that season 2 of "Roseanne" had planned to occupy this fall — Tuesdays at 8 p.m. — Barr had to sign over her rights to the show for the spinoff to move forward. "I regret the circumstances that have caused me to be removed from 'Roseanne,'" Barr said in a statement in June. "I agreed to the settlement in order that 200 jobs of beloved cast and crew could be saved, and I wish the best for everyone involved."

Goodman told the Times Sunday that he "sent her an email and thanked her for that. . . I did not hear anything back, but she was going through hell at the time. And she’s still going through hell." But since then, he hasn't had contact with Barr since "Roseanne" was canceled.

Melania can speak out on cyberbullying, but I won’t support FLOTUS until she dumps Trump