No disrespect for John McCain, but our hagiographic treatment of "war heroes" reflects a national pathology 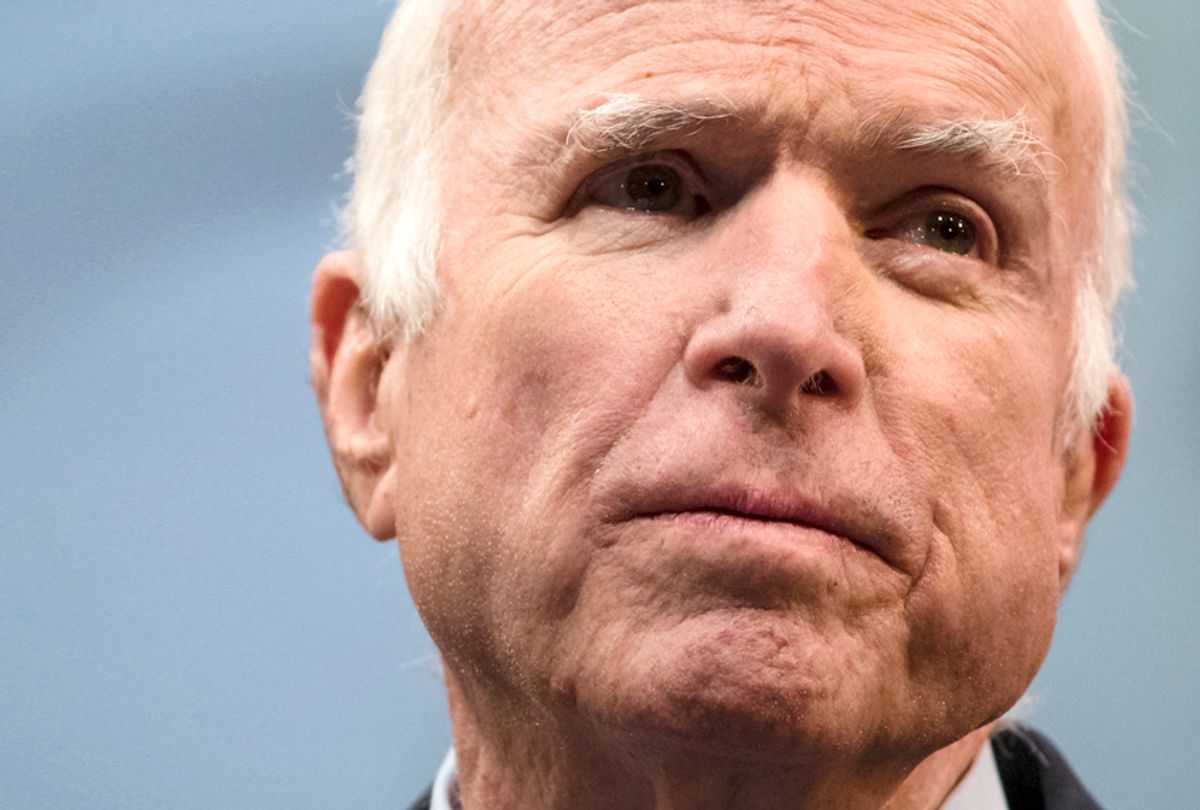 First, the White House lowered its flag to half-mast with word that Sen. John McCain had died on Sunday night. By Monday morning it was back flying full mast until late in the afternoon, when it was lowered again, where it will stay until he is buried.

These bipolar flag gyrations were used by the media as just more evidence of the Trump administration's incompetence. But for me it was a subconscious signal from the universe of a disoriented superpower lost in the fog of its own histrionic narcissism and military worship.

We do war-hero death with Hollywood-scale hagiography, and John McCain’s passing is no exception. We worship our war heroes in a kind of trance that reinforces itself one generation after another. It’s a past that freeze-frames the future because we are not permitted to imagine anything else.

We don’t nearly do as well with the living veterans who face lifetimes with the wounds and disabilities they incurred in combat and suffer further insults from a medical system that often fails them.

But our white-gloved brass precision in a state funeral like McCain's provides a sense of continuity and purpose. It squeezes out the application of critical reason or self-critique because such introspection is judged disrespectful or unpatriotic. It helps provide an apparent enduring meaning to the loss and helps rationalize the world as we have arranged it.

So there’s no room to contemplate the tragic irony that from Vietnam through Iraq we remain addicted to war even as we reflect, years later, that both were huge bloody mistakes.

Like the drunk that beats his wife, we are sorry the morning after, but that remorse just can’t get enough traction to break the cycle of addiction. War just makes us feel so alive and galvanizes us with a sense of purpose.

Our collective narrative, that America’s chapters are one valiant military campaign after another, won’t let us contemplate the real arc of John McCain’s life. He will endure as a military man who christened his presidential campaign bus the “Straight Talk Express.”

He was held captive in North Vietnam and tortured as a young man, after he was shot down bombing a country in a war that in retrospect was judged by no less a leading figure than its chief architect, former Defense Secretary Robert McNamara, as a grand waste and miscalculation.

Decades later, as an elder statesman, still bearing the scars of Vietnam, McCain was one of the leading champions of the war in Iraq and provided essential air cover to President George W. Bush’s "surge," on which McCain conceded he bet his presidential ambitions on.

Yet in McCain's memoir, published this spring, he wrote that the Iraq War “can’t be judged as anything other than a mistake, a very serious mistake, and I have to accept my share of the blame for it.”

Is it just such an awful truth that we ignore it entirely out of respect for the dead?

When it comes to the military, the United States is on a dangerous level of autopilot and there’s no better time to bring it up then as McCain, our perennial warrior, is laid to rest.

As Charlie Pierce pointed out in Esquire two weeks before McCain died, it was President Trump who made headlines when he signed the John S. McCain Jr. National Defense Authorization Act into law while never mentioning McCain. As chairman of the Senate Armed Services Committee, McCain clearly meant to leave that law as his living legacy.

But the media coverage was another surreal example these days of form trumping substance.

“This was both astonishingly petty and completely predictable,” Pierce wrote. “However, that more than 11 seconds worth of attention was spent on this towering outrage is a severe indictment of the way the elite political media handles important policy issues.”

The “legislative tribute” to McCain hands the Trump administration a bloated $717 billion appropriation for military spending, more than a 10 percent increase over the previous year that includes military engagements in places like Mali, Niger and Yemen, places most Americans can’t find on a map.

Post 9/11, a weird shift has played out in American public opinion about the military, one that has also turned the news media into cheerleaders lusting for embeds.

Despite the fact that our military campaigns in Iraq and Afghanistan have languished on for years, taking a heavy toll on the civilian population and the environment, Americans are increasingly placing ever greater confidence in the military over other pillars of our government.

“Somehow ― and this should be truly unnerving ― Americans have gotten to a place where, it seems, they trust only soldiers,” wrote Major Danny Sjursen in a post for the Huffington Post entitled “The Hazards of Military Worship.”

In June 2016, for instance, a Gallup poll found that 73% of Americans had “quite a lot” of confidence in the military, versus 36% for the presidency and 6% for Congress.  Such disparities ought to inspire distress about the direction of our public institutions, but rarely do.

And so we remained locked in a perpetual war that knows neither time nor terrestrial limits. We dutifully salute when Vice President Mike Pence tells us our new war frontier must be launching weapons into space so we can conquer the heavens.

Can we call this military madness by its true name. To infinity and beyond we go, or until we meet our Maker.