When private companies took over the state's prison kitchens, inadequate food was just the tip of the iceberg 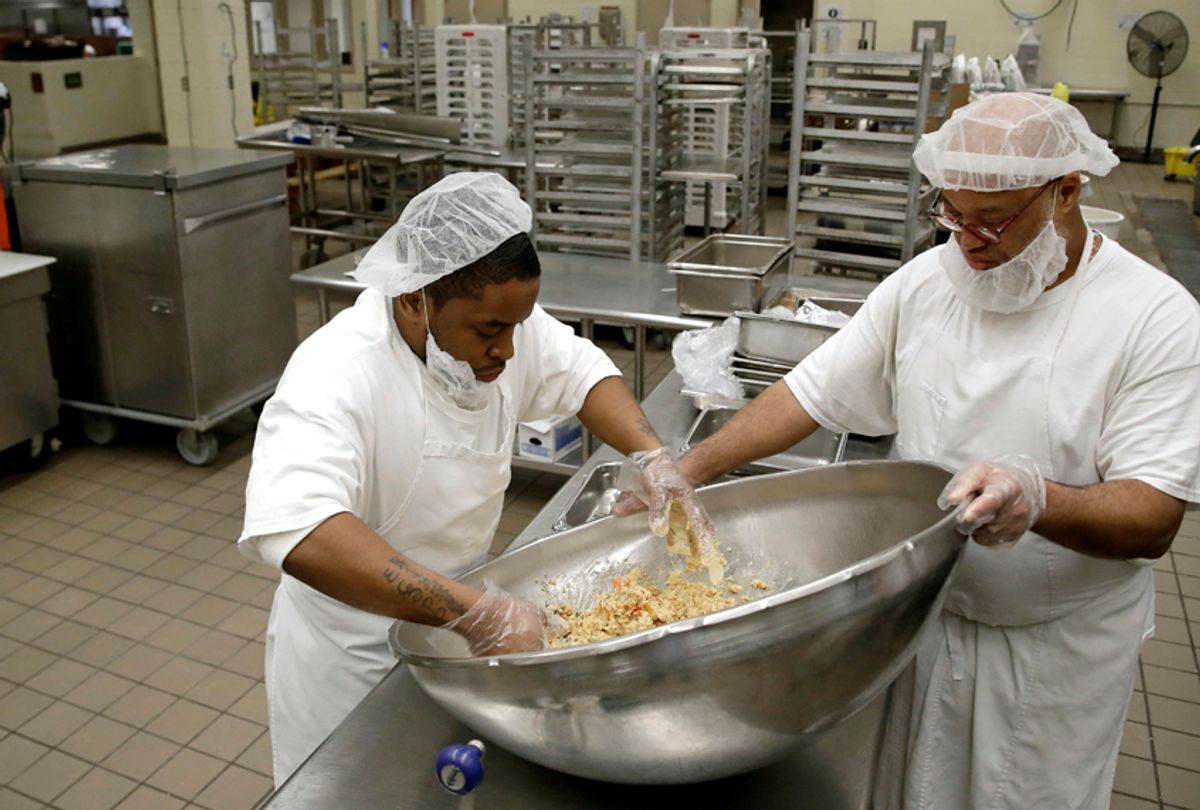 Monroe Laws and Antoine Money mix ingredients to make a nutraloaf, a meal typically given to inmates for misbehavior involving food or bodily waste, before cooking it in a kitchen at James T. Vaughn Correctional Center in Smyrna, Del. (AP/Patrick Semansky)
--

What happens when an institutional kitchen transitions from being run by municipal employees to operating as part of a for-profit company? At the Michigan Department of Corrections’ (MDOC) prison kitchens, a five-year experiment in privatization led to a whole host of problems, including a dramatic decline in food quality and safety, destabilized prisons and a drop in fair-wage jobs. It also may have caused a riot, put people’s lives in danger, created an odd alliance between inmates and guards against the MDOC administration, and failed to save the state money.

“It was a human atrocity against the inmates, in my opinion,” Ronald Taylor, a now-retired Michigan corrections officer, told Civil Eats. “The rotten garbage that was being served, plus the way they were allowing it to be prepared. It was an atrocity.”

In one Michigan prison, an Aramark employee pulled discarded food out of a trash can and served it. In others, compnay employees fed inmates cakes on which rats had nibbled. Rotten chicken tacos resulted in 250 inmates being sickened and quarantined — and a class action lawsuit. Mold began to plague state prison kitchens, and some inmates ate cold food for months when a mold infestation shut down a chow hall. Multiple reports of maggots surfaced.

Aramark reduced portion sizes and some facilities provided nothing more than flaccid bologna sandwiches for dinner. Inmates say the private companies eliminated seasoning, used low-grade food, and frequently ran out of ingredients. The food was reportedly prepared in filthy kitchens with broken appliances. Aramark employees also regularly had sexual contact with inmates, and smuggled in contraband and drugs.

Michigan Gov. Rick Snyder — who along with the state’s Republican-led government had turned the kitchens over to institutional food giant Aramark in December 2013, ostensibly to save money—admitted in January 2018 that the arrangement had failed.

“The benefits of continuing on that path don’t outweigh the costs and we should transition back to doing it in-house,” Snyder said during a budget speech in January. Now, the state is reinstating the 340 employees of the Michigan Corrections Organization union in what many there hope will be a return to the largely scandal-free kitchens that the state ran prior to the switch.

The fact that a staunchly conservative government concluded that kitchen privatization doesn’t work is surprising, and has important implications about the growing reliance on private companies in other institutional kitchens around the country.

Civil Eats spoke with inmates, corrections officers, and prison reform advocates to understand what happened in Michigan, and what it means for institutions, such as schools, hospitals and universities, that have privatized their food service.

Lamont Heard, who is serving a life sentence and successfully sued the MDOC for shorting Muslim inmates on calories (2,600 daily calories are required by the state) during Ramadan, witnessed first-hand the way private companies ran the prison kitchens.

“Sanitation is a big issue,” he said. “Cleaning tables, making sure counters are clean, trays clean — they don’t really care about that. The employees make it clear they’re there for a paycheck. It’s the lowest grade food that the companies can get for the smallest amount of money.”

The stated purpose of Michigan’s privatization plan was to save the state money on operating costs — replacing union workers earning $15 to $25 per hour with low-wage Aramark workers earning $11 to $13. But critics point out that disabling the union positions in prison kitchens served as an added benefit.

In 2013, the MDOC signed a three-year, $145 million contract with Aramark despite the fact that a union — the American Federation of State, County, and Municipal Employees (AFSCME) Council 25 — offered to match that price. The union-busting point was driven home in 2015, when the department dumped Aramark and switched to Tampa-based Trinity Food Services, with which it signed a three-year, $158 million contract — a more expensive contract than what AFSCME had offered.

Even at the higher cost, the state witnessed the same problems with Trinity that it had seen with Aramark. In addition to the health and human rights issues around food, these companies face problems far beyond the chow hall, with a litany of other daily problems disrupting the prisons’ operations.

Since late 2013, the MDOC issued more than 400 stop work orders against private employees, barring employees from prison grounds for misconduct, and allegedly covered up at least 60 more incidents. Corrections officers say staffing shortages, turnover and no-shows were also common. But there was little that the corrections officers could do about the situation because they didn’t have authority over private employees, and any issues had to be reported to company management, a process that could take days.

Nearly starving inmates and feeding them tainted food is a cruel form of punishment, but it’s not the only concern, according to one MDOC prison guard who only agreed to speak with Civil Eats anonymously. As they put it, “Food is a control mechanism.”

Corrections officers say gangs in the prisons they worked in exerted control over the food supply because private employees worked with them or didn’t stand up to them, and Lamont Heard noted that many inmates view the chow hall as a dangerous place.

“If I go in there and I’m expecting to receive a certain food and I don’t get it, then I’m going to be upset,” Heard said. “Or if the food tastes horrible, or the meat’s not done, and the employee is telling [us] she can’t fix the problem, then you got a bunch of angry people.”

Indeed, problems with food were largely behind a 2016 riot in the Kinross Correctional Facility. Aramark’s decision in 2015 to substitute ketchup for spaghetti sauce led to a protest in another Michigan prison, and multiple other inmate protests have occurred in recent years. Around the country, food-related problems have been known to ignite deadly riots and unrest in prisons.

Aramark did not respond to a request for comment for this story, but it has said in the past that reported problems were “manufactured attacks” made by the unions.

Publicly, the MDOC has said that cost was the only issue that led it to cancel the contract with Trinity. An audit found Aramark overbilled Michigan by $3.4 million, and the Kinross riot cost around $900,000 in damages and overtime pay. But in addition to falling short on the food and service aspects of their contracts, corrections officers Civil Eats spoke with say Trinity and Aramark didn’t do their own laundry, take care of security or perform other duties that their contracts stipulated, and therefore shifted more costs to the state. Factor in expenses like legal fees to defend against lawsuits, and the $6 million that Michigan Republicans had estimated the state would save by contracting with Trinity starts to evaporate.

Neither the MDOC nor Trinity responded to requests for comment for this story, and Trinity has rarely commented publicly on problems in Michigan or in its other kitchens around the country.

“[Privatization] doesn’t work because the goal . . . is not to provide adequate food, nutrition, or the constitutional minimum of nutrition. The goal is to make money,” Friedmann said. “There are only so many ways to generate profit. One way is to provide less food or less quality food. Another way is to pay your employees less.”

Lower wages attract less qualified and committed employees. Corrections officers don’t have authority over private company employees, Heard says, and the employees must run all issues by management. So if an inmate is shorted on food, or was served rotten food, the issue isn’t immediately resolved in the chow line. A grievance has to be filed and presented to a company boss before a meeting is held. That process can take days and, in the meantime, the inmate can go hungry.

Daniel Manville, an attorney with the Michigan State University Civil Rights Clinic, represents pro bono clients whose civil rights are violated in prison. He says he sees similar issues with private companies in all areas of prison service, and that Trinity and Aramark’s failures are not isolated events.

“It’s across the board in any type of privatization — custody, food, medical care, you name it,” Manville said. “This is what happens when they replace regular state employees with people . . . who are paid far less.’”

Similar problems exist in Trinity and Aramark-run kitchens around the nation. In Ohio’s prison kitchens, where the state replaced unions with Aramark in 2013, the issues didn’t receive as much media attention, and the Ohio Department of Corrections re-upped Aramark’s contract. In Georgia, the Southern Center for Human Rights stepped in after the Atlanta Journal-Constitution reported that hungry inmates were eating toothpaste because Trinity wasn’t providing enough food.

In the Chicago Public Schools (CPS), the district and Aramark fought back against students who protested their “disgusting” Aramark-prepared school lunches. But CPS ended its custodial contract with the company earlier this year after an inspection of district schools found “rodent droppings, pest infestations, filthy food-preparation equipment,” among other things. Similar issues have been reported in university kitchens run by Aramark, and the company’s treatment of minority workers at a Philadelphia stadium led to protests, while Aramark employees at the University of Southern California have also protested low wages.

Still, Trinity and Aramark remain employed by many institutions. Alex Friedmann said that if there are two things that set the Michigan prison situation apart, it’s the media coverage and the intense, sustained scrutiny. Both factors led a respected Michigan pollster to poll state residents on privatized prison kitchens. It found over 60 percent of residents wanted Aramark out of the kitchen, highlighting the public’s level of awareness.

“They took positions away from state employees, so there was extra scrutiny to see if private companies would do a better job,” Friedmann says. “And the answer to that was a resounding ‘No.’ They couldn’t and didn’t.”

Friedmann says it’s difficult to determine what — if any — impact the situation in Michigan will have at prisons and other institutions around the country. But he isn’t optimistic that it will mean much. He pointed to the Ohio Department of Rehabilitation and Correction, which has experienced many of the same issues as those seen in Michigan, but still renewed Aramark’s contract in 2017.

“People do not learn from the mistakes of other people. Ironically, this is kind of the same problem that puts a lot of people in prison to begin with,” Friedmann says. “Our government is no different. [A department of corrections] figures ‘We need to save money and, yeah, they had problems there, but we won’t have problems here. We’ll keep a closer eye on them.’

“So, unfortunately, I don’t think we’ll see people learning a lesson from Michigan. They’ll have to learn their own lesson.”