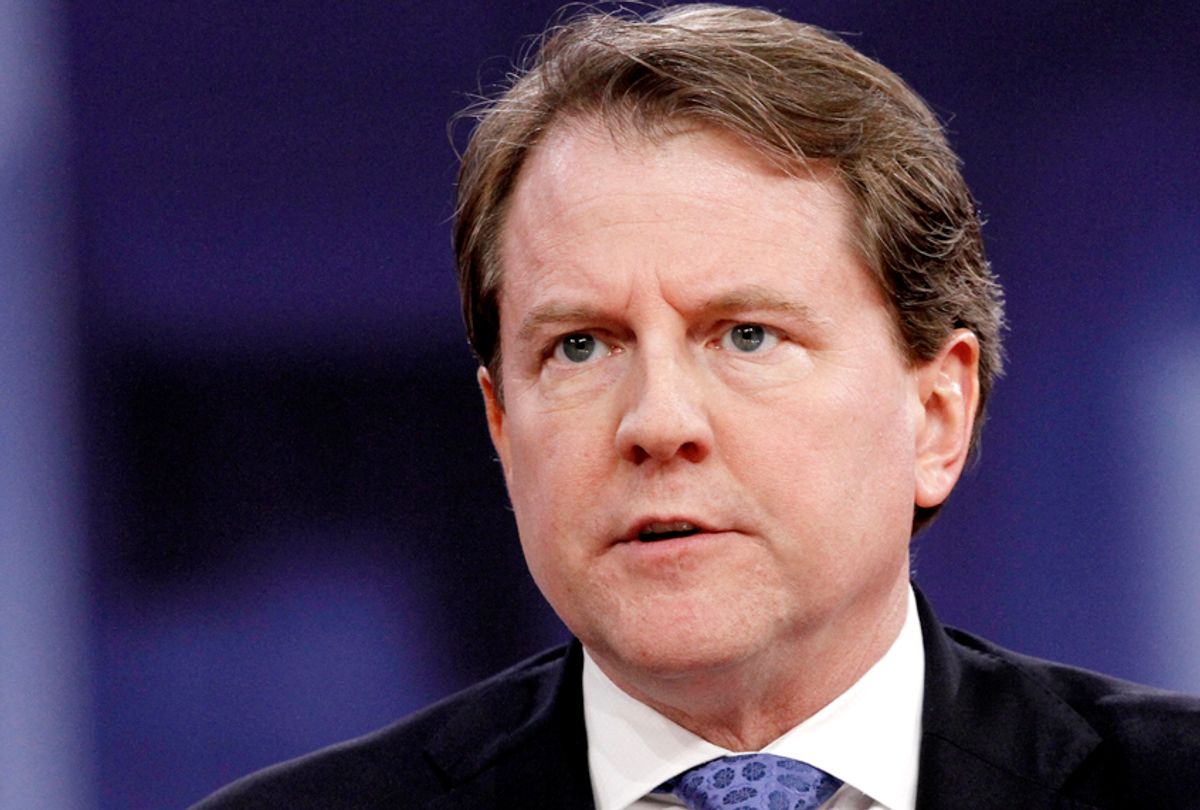 White House counsel Don McGahn is expected to depart the West Wing this fall, President Donald Trump announced Wednesday morning on Twitter. McGahn's imminent departure is slated to come "shortly" after the Senate's vote on Judge Brett Kavanaugh's appointment to sit on the U.S. Supreme Court, according to the president.

On Wednesday, Trump praised McGahn, who reportedly threatened to resign last year when the president ordered the firing of special counsel Robert Mueller. (The former FBI director is leading the Justice Department's ongoing probe into alleged collusion between Russia and Trump's 2016 presidential campaign.) Trump declared that he has "worked with Don for a long time and truly appreciate his service!"

White House Press Secretary Sarah Huckabee Sanders said there is no backstory to McGahn's exit. "He's worked for the president for a long time. He's been ― they have a good relationship," she told reporters shortly after Trump’s announcement. "There's really not a lot to add here."

McGahn would like to be succeeded by Emmet Flood, the attorney who represented President Bill Clinton during his impeachment proceedings and who now steers Trump's Russia legal strategy, according to a new report from Axios. Flood joined Trump's legal team in May to "represent the president and the administration against the Russia witch hunt," White House Press Secretary Sarah Huckabee Sanders said at the time.

The news of McGahn's impending departure comes ahead of Kavanaugh's confirmation hearing, which is slated to start next week and last three or four days, with a final vote in October at the latest, according to Senate Judiciary Chairman Chuck Grassley.

Trump's announcement was met with a quick criticism from Grassley, who tweeted to the president: "I hope it's not true McGahn is leaving WhiteHouse Counsel. U can't let that happen."

McGahn's upcoming exit also comes days after Vanity Fair reported that he is at odds with the president over a potential pardon for Trump's former 2016 Campaign Chairman Paul Manafort, who was found guilty last week on eight counts of bank and tax fraud. According to the report, Trump is considering replacing McGahn with a lawyer who would be willing to draft a pardon for his disgraced former campaign chairman.

In recent months, speculation regarding McGahn's departure has swirled. It was most recently renewed following the revelation earlier this month that he "cooperated extensively" with Robert Mueller's probe into Russian election interference, participating in several interviews spanning 30 hours over the last nine months. The conversations have unnerved Trump, who did not know the full extent of McGahn's discussions, CNN reported, citing two people familiar with the president's thinking.

While The New York Times presented McGahn and other officials' decisions to cooperate fully with the special counsel inquiry as "unusual," Trump tweeted that the Times had falsely implied that McGahn had turned on him. He also said that McGahn's conversations with Mueller's team were part of the administration's bid to be the "most transparent in history."

"I allowed White House Counsel Don McGahn, and all other requested members of the White House staff, to fully cooperate with the Special Counsel," Trump tweeted following the publication of the Times story. "In addition we readily gave over one million pages of documents. Most transparent in history. No Collusion! No Obstruction. Witch Hunt!"

This is not the first time McGahn has reportedly signaled interest in leaving the White House. Last September, he also reportedly threatened to quit his job because Trump and his son-in-law Jared Kushner kept ignoring official protocols for meeting together, The Wall Street Journal reported. Both men are under scrutiny by Mueller, and McGahn reportedly expressed concern that meetings between Trump and Kushner could be seen as an effort to coordinate their stories.

In March, Politico reported that McGahn was still looking to leave the White House and return to the Jones Day law firm where he had previously worked. However, McGahn's resignation was reportedly contingent on Trump finding a replacement, and he did not find one at the time.