Trump, who has long threatened to fire his attorney general, could have just received his long-awaited green light 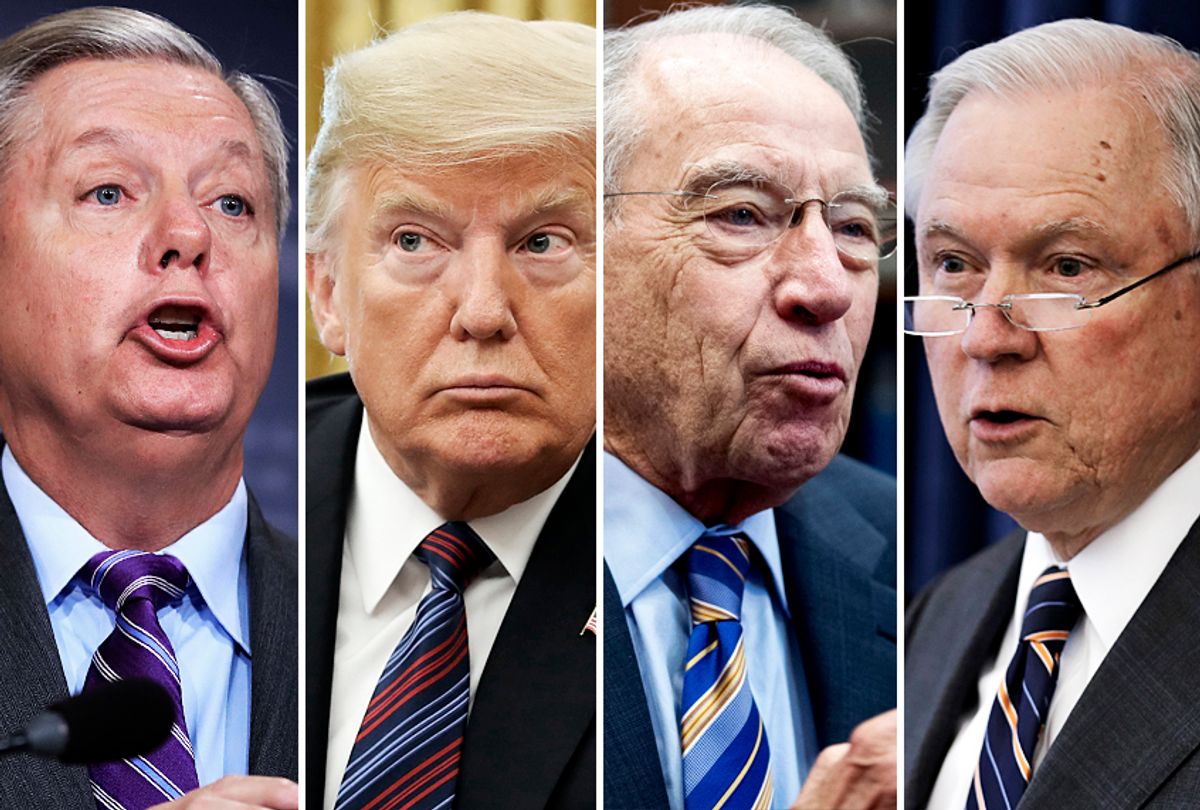 After two members of Trump's inner circle were found guilty of criminal charges last week — his 2016 presidential Campaign Chairman Paul Manafort and his former personal lawyer Michael Cohen — the president has only made his fury over Sessions' recusal from Robert Mueller's ongoing investigation into Russian interference in the 2016 presidential election more transparent.

One crucial go-ahead came from Senator Lindsey Graham of South Carolina, who wavers between criticizing many of the president's policies to cozying up to a commander-in-chief who occasionally invites him to golf outings at a Trump-branded resort.

Graham formerly affirmed the following: "If Jeff Sessions is fired, there will be holy hell to pay." But a lot has happened between July 2017 and last week.

"The president's entitled to an attorney general he has faith in – somebody that's qualified for the job," Graham told reporters last week, according to CNN. "And I think there will come a time – sooner rather than later – where it will be time to have a new face and a fresh voice at the Department of Justice."

"That's an important office in the country," Graham added. "And, after the election, I think there will be some serious discussions about a new attorney general."

At the same time, the South Carolina Republican also warned that firing Sessions before the midterm elections in November "would create havoc" by forcing the Senate to confirm a new attorney general alongside Trump's Supreme Court nominee Brett Kavanaugh, according to Bloomberg.

Continuing his media blitz in support of Trump's ability to remove Sessions from office, Graham further declared Tuesday morning on NBC's "Today Show" that the pair's "relationship is beyond repair."

"It’s a pretty deep breach. And here’s what I’m suggesting: that he’s not the only man in the county that can be attorney general," Graham continued. "He’s a fine man. I’m not asking him to be fired. But the relationships not working."
When anchor Savannah Guthrie pointed out that Trump's "only beef" with Sessions appeared to be Sessions' decision to recuse himself from Mueller's investigation, Graham countered the claim. He also stated that a change in Cabinet members should not result in an end to the Russia probe.
"You have to replace him with someone who is highly qualified," Graham added, "and will commit to the Senate to allow Mueller to do his job.

In another reversal, Senator Chuck Grassley of Iowa, the chairman of the Senate Judiciary Committee who had previously said the group was too busy to tackle the possibility of a Sessions replacement, also signaled a willingness to take up the nomination of a new attorney general.

"I do have time for hearings on nominees that the president might send up here that I didn't have last year," the senator said in an interview with Bloomberg. "Clearly, Attorney General Sessions doesn’t have the confidence of the president," Grassley added.

Grassley previously took aim at Sessions because of the attorney general's opposition to his efforts to pass a criminal justice overhaul.

Both senators' comments came after a Fox News interview in which Trump repeatedly insulted Sessions and criticized his attorney general's decision to recuse himself from overseeing the Russia investigation, alleging that he had never taken control of the Department of Justice.

Sessions, who represented Alabama in the Senate for 20 years and was the first senator to endorse Trump, defended his performance in a statement on Thursday.

"We have had unprecedented success at effectuating the President’s agenda," Sessions said. "While I am attorney general, the actions of the Department of Justice will not be improperly influenced by political considerations."

Trump, in a series of Friday morning tweets, called on Sessions to go after "the other side" in the Russia investigation that he's often blasted as a politically motivated "witch hunt."

"'Department of Justice will not be improperly influenced by political considerations.' Jeff, this is GREAT, what everyone wants, so look into all of the corruption on the 'other side' including deleted Emails, Comey lies & leaks, Mueller conflicts, McCabe, Strzok, Page, Ohr," Trump wrote in a tweet, mentioning several figures central to the special counsel investigation.

In a second tweet, the president said, "FISA abuse, Christopher Steele & his phony and corrupt Dossier, the Clinton Foundation, illegal surveillance of Trump Campaign, Russian collusion by Dems - and so much more. Open up the papers & documents without redaction? Come on Jeff, you can do it, the country is waiting!"

Meanwhile Sen. Susan Collins, a moderate Republican from Maine, said firing Sessions "would not be a wise move."

"I don't see the president being able to get someone else confirmed as attorney general were he to fire Jeff Sessions," Collins told reporters.

Sen. Ben Sasse of Nebraska, one of Trump's earliest critics in the GOP, said on the Senate floor Thursday that conversations regarding firing Sessions were "goofy talk." He also said he could not imagine himself voting for a new attorney general if Sessions is fired.

"I find it really difficult to envision any circumstance where I would vote to confirm a successor to Jeff Sessions, if he is fired because he’s executing his job, rather than choosing to act as a partisan hack," he said.

Arizona Sen. Jeff Flake, a fellow Republican on the Judiciary Committee, warned that firing Sessions would be a "big mistake" for the president.

Flake also indicated Republicans like Graham who have started suggesting that Sessions would be fired after the midterm elections are in the minority.