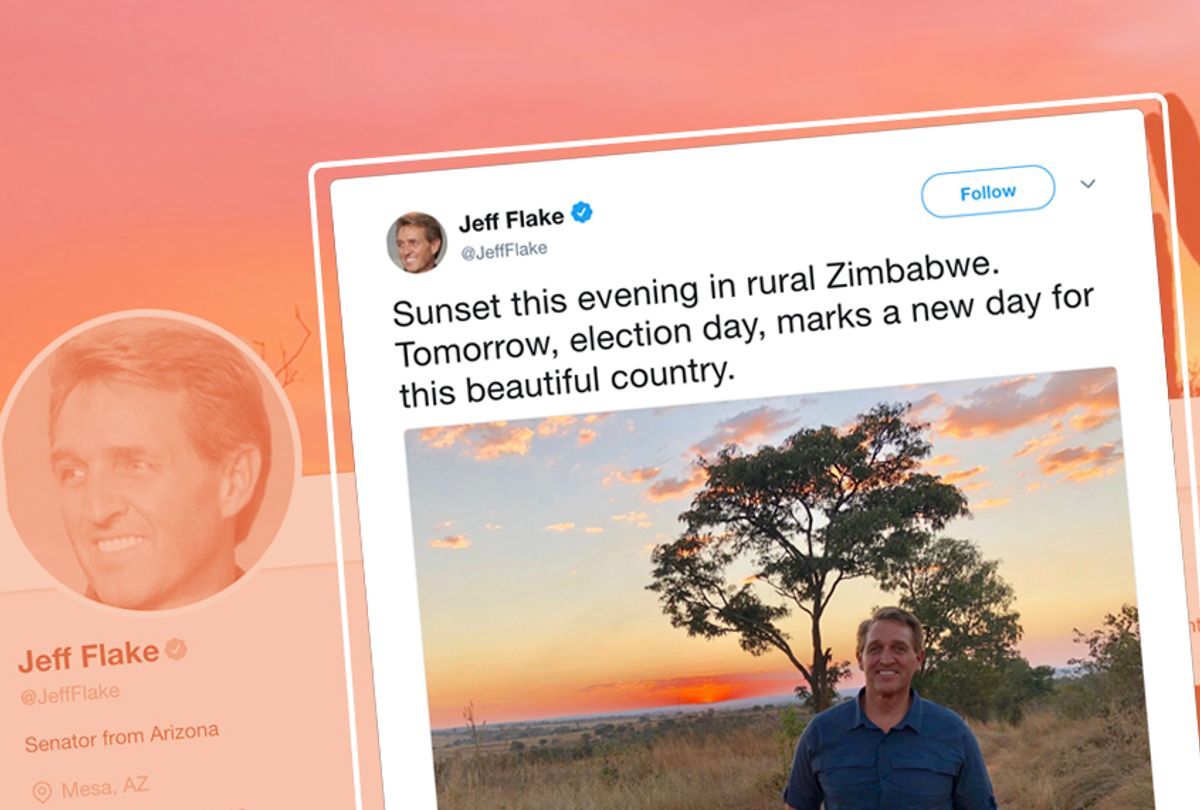 Arizona Senator Jeff Flake fled the country for Zimbabwe this week seemingly for the sake of preserving the African nation's fledgling democracy — but many political observers stateside suspect that there is a notable secondary effect of such a trip: to delay the upcoming hearing on President Donald Trump's Supreme Court justice nominee Brett Kavanaugh.

The Republican lawmaker, who has been an ardent Trump critic, touched down in the African country to serve as an official observer of the country's historic elections over the past weekend. According to his office, the senator will stay in the region for approximately three more weeks. That's important because it means Flake will miss the Senate's mandated early return to Washington, D.C. next month.

While Flake is helping promote democracy overseas, he could be inserting a pause in McConnell's timeline to vote on Kavanaugh's nomination in the coming weeks. McConnell canceled the Senate's planned three weeks of summer recess in an attempt to move the confirmation process forward. Earlier this month, McConnell revealed that his goal is to confirm a new justice to the court in time for the start of the Supreme Court's next term in October. As majority leader, McConnell sets the schedule in the narrowly divided Senate.

"The timetable typically for recent Supreme Court justices, if we stuck to that timetable and I intend to, would give us an opportunity to get this new justice on the court by the first of October," McConnell told reporters in Kentucky earlier this month.

Kavanaugh has already started to make the rounds on Capitol Hill as he works to secure the simple majority support he'll need to be confirmed as Justice Anthony Kennedy's successor on the nation's high court. Republicans currently hold a slim 51-49 majority in the chamber, which means they could confirm Kavanaugh without any help from Democrats, but with Arizona Senator John McCain at home fighting brain cancer, Kavanaugh would need the backing of all 50 senators —  including Flake, who's trip to Zimbabwe will likely delay the vote.

Collins and Murkowski, however, have hinted at a smooth confirmation process ahead for Kavanaugh.

"How can anyone argue that someone who served on the circuit court for more than decade and has sterling academic credentials and teaches law is not qualified? But that’s only one part of the test," Collins said. Kavanaugh currently serves on the U.S. Court of Appeals for the District of Columbia Circuit.

Most recently, Republican Sen. Rand Paul of Kentucky announced that he will support Judge Kavanaugh's nomination to the Supreme Court.

"After meeting Judge Kavanaugh and reviewing his record, I have decided to support his nomination. No one will ever completely agree with a nominee (unless of course, you are the nominee). Each nominee however, must be judged on the totality of their views character and opinions," Paul said wrote in a tweet.

Several Democratic senators, including those up for reelection in states won by Trump, are deferring on making a judgment until they can better examine Kavanaugh's record or have a chance to question him publicly, though McConnell predicted that most members already know how they're going to vote.

"I think most members who are in the undecided column will wait until the hearing," he said. "My suspicion is there's a fairly small number of people who are genuinely undecided."