Revenge of the "flipper": Cooperating with the feds can offer a chance at redemption

Despite the longtime stigma against "rats," many criminals who cooperate get a real chance to reset their lives 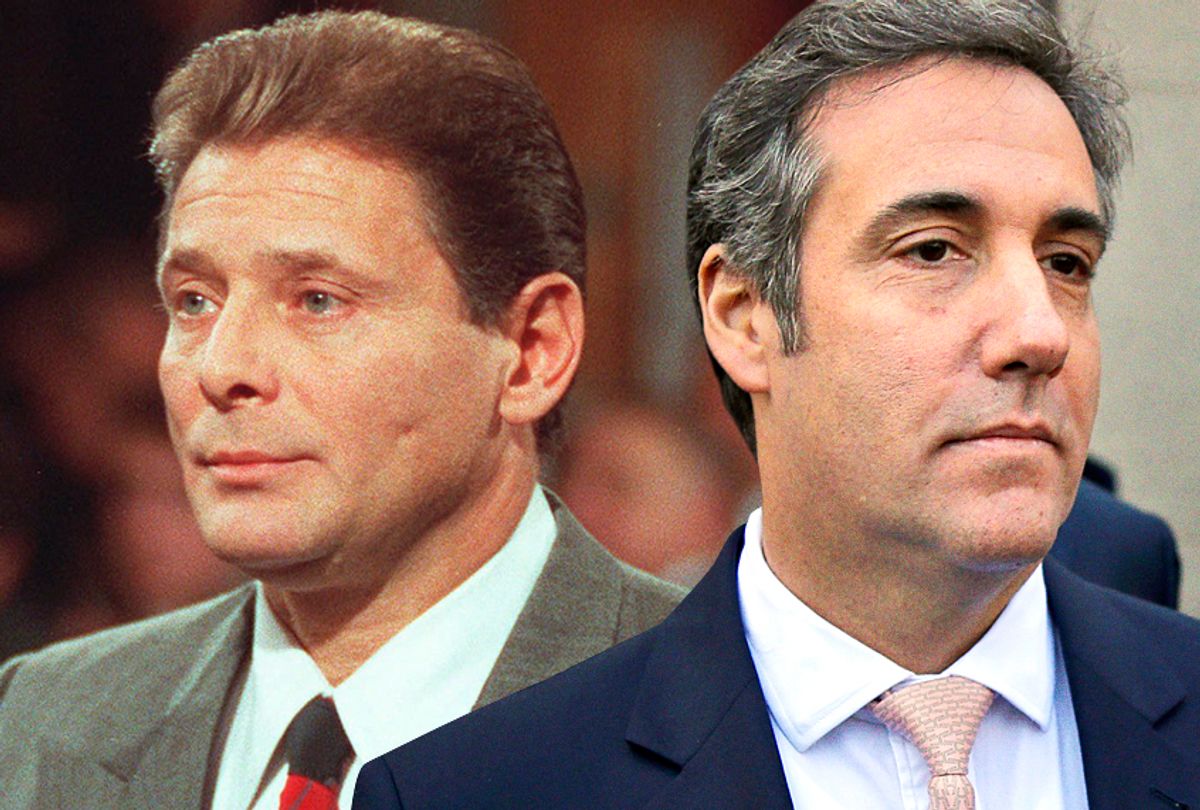 In a recent interview with Fox News, President Donald Trump -- alternately cascading venom on his former lawyer Michael Cohen, who entered into a plea deal with federal prosecutors to get a shorter sentence, and acclamation on former campaign chairman Paul Manafort, who did not -- declared in relation to Cohen’s plea, “It’s called flipping and it ought to be illegal.”

Flipping those on the inside of a criminal conspiracy has long been central to the federal criminal justice system. Mob bosses like John Gotti, famously betrayed by Sammy "The Bull" Gravano, who got just five years for his involvement in 19 murders, deride those who turn “rats” and “snitches.” In truth, over thousands of years, mainstream society has also learned to scorn a "Judas."

Yet flipping gangsters into cooperators, as prosecutors call them, is often the only way to stop rampant criminal conspiracy, often involving murder. Ordinary outside witnesses are too scared to testify; they have little incentive to do so and everything to lose.

In the early 1990s, New York City, along with the rest of the country, battled a soaring homicide epidemic. Police struggled to solve the killings and to bring the heads of the crack gangs, men who often had killed a half a dozen or more with impunity, to justice. Scores of murders went unsolved, while killers walked free and the homicide cycle continued. While the high-rise housing projects of the Bronx offered a lucrative market for crack consumers, the projects were also easily controlled by violent gangs who meted out retribution to anyone caught speaking to the police. With ordinary people too scared to testify, the gangs prospered and murdered at will, and the murder epidemic in New York continued to flourish, with the Bronx as the cradle of the killing.

Elizabeth Glazer, head of the violent crimes unit at the U.S. attorney's office for the Southern District of New York -- the same district where Michael Cohen is being prosecuted -- realized that the only way to stop the killing was to apply RICO laws, traditionally only used against the mafia, against the street crews. She used retired NYPD cops as investigators, men often drawn from the same neighborhoods as the street gangs, to get gangsters inside the crews to flip.

It’s intense work getting men who view cooperating with the police as alien to their own DNA even to consider it. But retired detectives knew the estrangements, revenge cycles and petty jealousies that are hallmarks of gang life. They turned numerous gangsters, drawing out confessions and the names of other men involved in murders during hours and hours of conversations known as "proffers." If a criminal helps the government, a prosecutor can write a 5k letter requesting a downward departure from the draconian mandatory minimum sentences in the federal system.

The murder rate in the notoriously dangerous 41st precinct in the Bronx dropped 51 percent in the first 10 months after federal investigators began arresting and flipping gangsters. Over the next few years, as the murder rate dropped and the violence lessened, commentators called the success story the "New York Miracle," with some arguing the use of cooperators in federal RICO cases played no small part in making the city safe again.

John O’Malley was one of those former detectives who has flipped hundreds of men inside violent street crews. He told me recently, “The stigma of cooperation is much less than it once was.” In the 1970s, the taboo of snitching meant few were prepared to turn against their criminal conspirators. But in the me-me, self-centered decades of the 1980s, the 1990s and beyond, where personal enrichment and self-gratification outweighed any loyalty to one’s peers or society as a whole, many of those who were indicted in the federal system cooperated. Scores of gangs, cartels, syndicates and other criminal groups were destroyed as once loyal lieutenants eschewed the code of omertà and saved themselves.

In my book "Sex Money Murder: A Story of Crack, Blood and Betrayal," I document the rise and fall of the Sex Money Murder gang from the Soundview projects in the Bronx and the life and crimes of a man called Pipe who became OG (Original Gangsta) of the organization but faced life in federal prison on RICO charges. His only possible way out was a cooperation agreement. Pipe was flipped by John O’Malley and after cooperating was released from prison on time served. Years later he encountered two men from a Sex Money Murder gang who might well have delivered summary justice for his cooperation. Instead, they told him: “Anyone in your shoes would have had to cooperate to get out of that. We don’t blame you for what you did.” Times have changed.

But there is another side-product of cooperation, probably not originally intended by the architects of the federal system of mandatory minimums partnered with cooperation. Michael Cohen’s lawyer has said that his client is offering the truth in order to free himself and his family from living a lie and the weight of trying to cover up felonies. In the hours a felon spends with investigators revealing his crimes and those of his fellow conspirators, there is a chance to jettison the burden, to apologize and to explain and, perhaps, amid all that, a real chance for atonement.

Scores of former gangsters from the New York drug crews who were facing life in prison have successfully found straight lives and work all over New York as construction workers, bartenders and realtors, having left their old neighborhoods behind and been ostracized by their criminal co-conspirators thanks to the scarlet letter of cooperation. That very act of cooperation, as Michael Cohen is learning, is a punishment in its own right. But it is truly the first step towards redemption.

Jonathan Green is the author of "Sex Money Murder: A Story of Crack, Blood and Betrayal" (WW Norton 2018).