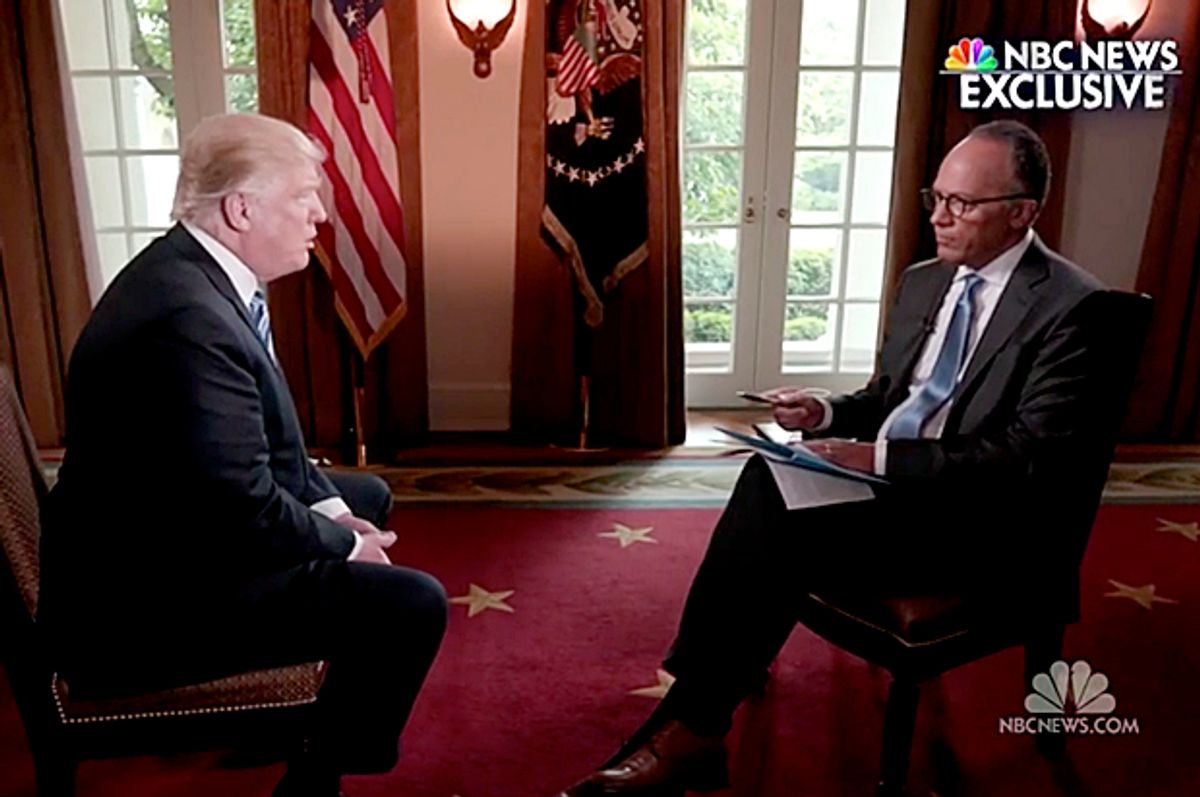 President Donald Trump took to Twitter on Thursday morning to make a baseless accusation against one major personality from NBC News, while regurgitating an accusation about another in a way that actually hurts his own image.

"What’s going on at @CNN is happening, to different degrees, at other networks - with @NBCNews being the worst. The good news is that Andy Lack(y) is about to be fired(?) for incompetence, and much worse. When Lester Holt got caught fudging my tape on Russia, they were hurt badly!" Trump claimed in an early Thursday morning tweet.

Even Fox News, Trump's favorite cable news giant, called him out for the baseless claim

"Is there any evidence that the interview with Lester Holt that the president did was somehow doctored?” anchor Jon Scott asked Fox News media critic Howard Kurtz on Thursday.

“You showed part of it earlier with John Roberts. This was an interview last year two days after the president fired Jim Comey at the F.B.I. And he gave an explanation and set off a firestorm saying it was, in his mind, related to the Russia investigation. There is no credible allegation that NBC, or Andy Lack, or Lester Holt edited the interview in a misleading way.”

“And by the way NBC posted the whole thing online, so people can look at it,” Kurtz reminded Fox News viewers.

Mike Brzezinski, the co-host of MSNBC's "Morning Joe", denounced Trump's tweet as "importantly stupid," "Not only is he attacking not only is he attacking NBC’s chairman Andy Lack, our boss, with stupid rumors, but also he’s going after the truth," Brzezinski explained. "Attacking NBC News. Saying that Lester Holt got caught fudging the interview. He's trying to shape the truth around the reality that he wants people to believe. And yes, I get it, this is a leading question, but how dangerous is this?"

It is likely that Trump was basing his assertions off of a report earlier this week from Page Six, one that pointed among other things to Lack's alleged mishandling of #MeToo accusations during his job. Ironically enough, if the report proves true, one of the reasons that Lack would be on the outs is that he sat on the infamous "Access Hollywood" tape in which Trump bragged about committing sexual assault instead of publishing it — an action that certainly helped Trump rather than hurt him. As Page Six reported:

Embattled NBC News Chairman Andy Lack is facing the boot from the once-prestigious news division over his mishandling of a series of #MeToo scandals and the Megyn Kelly debacle, sources exclusively confirmed to Page Six. Comcast chiefs have been seeking a replacement for Lack, 71, who is on the ropes after the downfall of his once close-friend Matt Lauer, the Brian Williams wreckage and allegations against legendary anchor Tom Brokaw. And there’s still-lingering questions about why NBC News sat on the infamous “Access Hollywood” “Grab em by the p - - - y” Donald Trump tape, and why they refused to run Ronan Farrow’s exposé on Harvey Weinstein before he went to the New Yorker.

It is unclear where Trump got the idea that Lester Holt had been caught "fudging" his Russia interview. During that interview, Trump famously admitted that he fired Comey over the Russia investigation, telling Holt that "when I decided to just do it I said to myself, I said, 'You know, this Russia thing with Trump and Russia is a made-up story.' It’s an excuse by the Democrats for having lost an election that they should’ve won."

On the decline of Fox News