In addition to President Donald Trump, Sarah Palin was not invited to John McCain's funeral: report 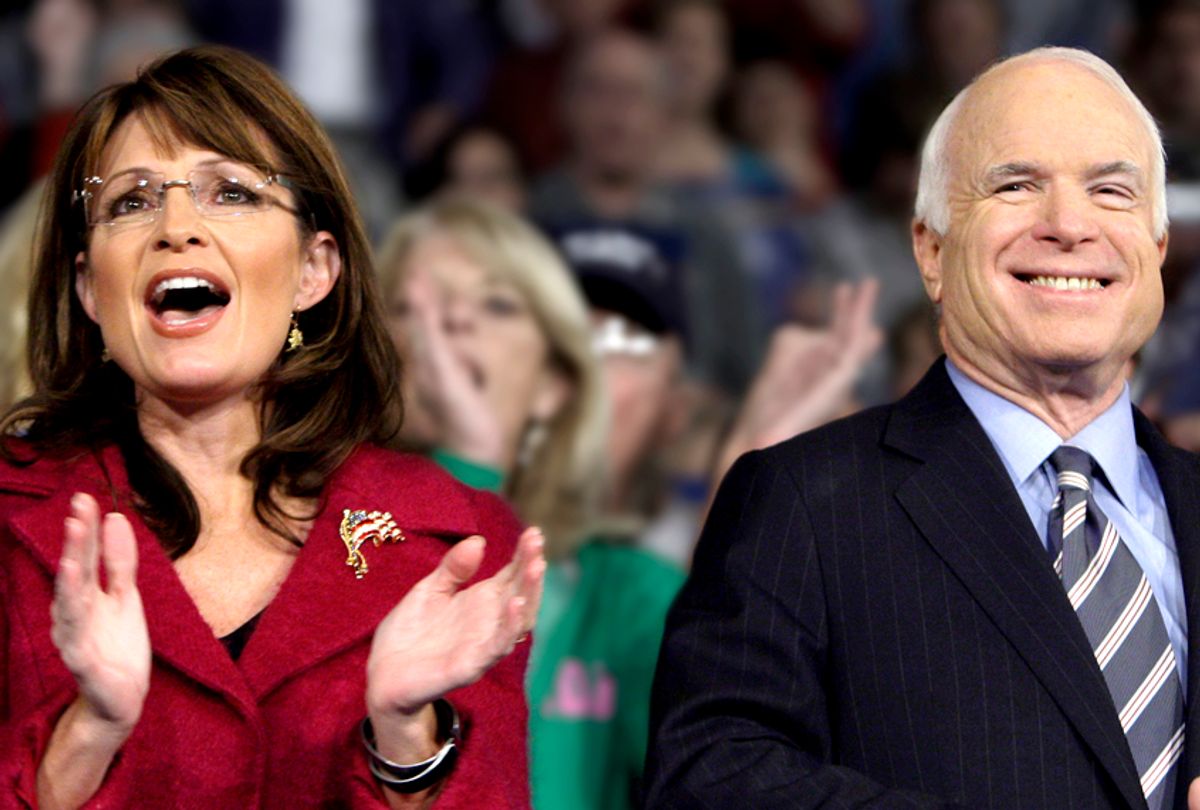 Sarah Palin, who was nominated as Republican presidential John McCain's running mate in the 2000 election, has reportedly not been invited to attend the late senator's funeral and memorial services following his death from brain cancer.

Multiple sources, including Carla Eudy, a fundraiser and McCain family friend who helped plan the services, told People magazine on Wednesday that an invitation had "not [been] extended" to the former Alaska governor.

NBC News also reported the snub on Wednesday. "10 years ago today, Sen. John McCain named Sarah Palin as his running mate," NBC's Kelly O'Donnell reported on Twitter. "She is not expected to attend memorial. The McCain family has not commented on the invitation guest list."

A "Palin family source" told NBC News that "out of respect to Senator McCain and his family we have nothing to add at this point."

"The Palin family will always cherish their friendship with the McCains and hold those memories dear,” the source added.

It is unknown why Palin was not invited to the services. As People noted, McCain had, in a documentary and in his final book "The Restless Wave: Good Times, Just Causes, Great Fights, and other Appreciations" released in May, disclosed that he wishes he had instead selected former Sen. Joseph Lieberman (I-Conn.) as his running mate in 2008.

Earlier this year, however, Palin told The Daily Mail that hearing McCain's supposed second-thoughts about choosing her as his running mate has felt like a "perpetual gut-punt" and has been unnerving because he has told her very different things.

"That's not what Sen. McCain has told me all these years, as he's apologized to me repeatedly for the people who ran his campaign, some who now staff MSNBC – the newsroom there – which tells you a lot," the former Republican vice-presidential candidate said.

"I attribute a lot of what we're hearing and reading regarding McCain's statements to his ghostwriter or ghostwriters," she added. "I don't know unless I heard it from Sen. McCain myself."

Following news of McCain's death on Saturday, Palin tweeted that McCain was a "maverick and a fighter."

"Today we lost an American original. Sen. John McCain was a maverick and a fighter, never afraid to stand for his beliefs," Palin wrote on Twitter. "John never took the easy path in life - and through sacrifice and suffering he inspired others to serve something greater than self."

"John McCain was my friend," Palin continued in a second tweet. "I will remember the good times. My family and I send prayers for Cindy and the McCain family."

McCain died last week at age 81 after being diagnosed with glioblastoma, or GBM, last year.

An emotional private ceremony for McCain was held Wednesday inside the Arizona State Capitol rotunda. The late senator will lie in state in Arizona for two days before being transported to the U.S. Capitol to lie in state there Friday. A memorial service will be held in his home state Thursday, where former Vice President Joe Biden will speak, before McCain's body is taken to Washington that night.

On Saturday, a funeral service will be held at the National Cathedral in Washington. While Palin has not been invited to attend, the men who bested McCain in his two bids for president will speak at the service.

Former President Barack Obama, whose campaign defeated McCain and Palin in 2008, will be speaking at the late senator's funeral service at the National Cathedral, and former President George W. Bush, who won the Republican presidential nomination in 2000 after a heated primary race against McCain, has also been invited to give a eulogy.

Like Palin, President Donald Trump, who also had a tumultuous relationship with the late senator, has been left off the list for McCain's funeral and memorial service. The Republican president infamously responded to criticism from McCain by calling into question whether he should be considered a war hero "because he was captured. I like people who weren’t captured."

McCain will be buried Saturday in private at the U.S. Naval Academy in Annapolis, Maryland.