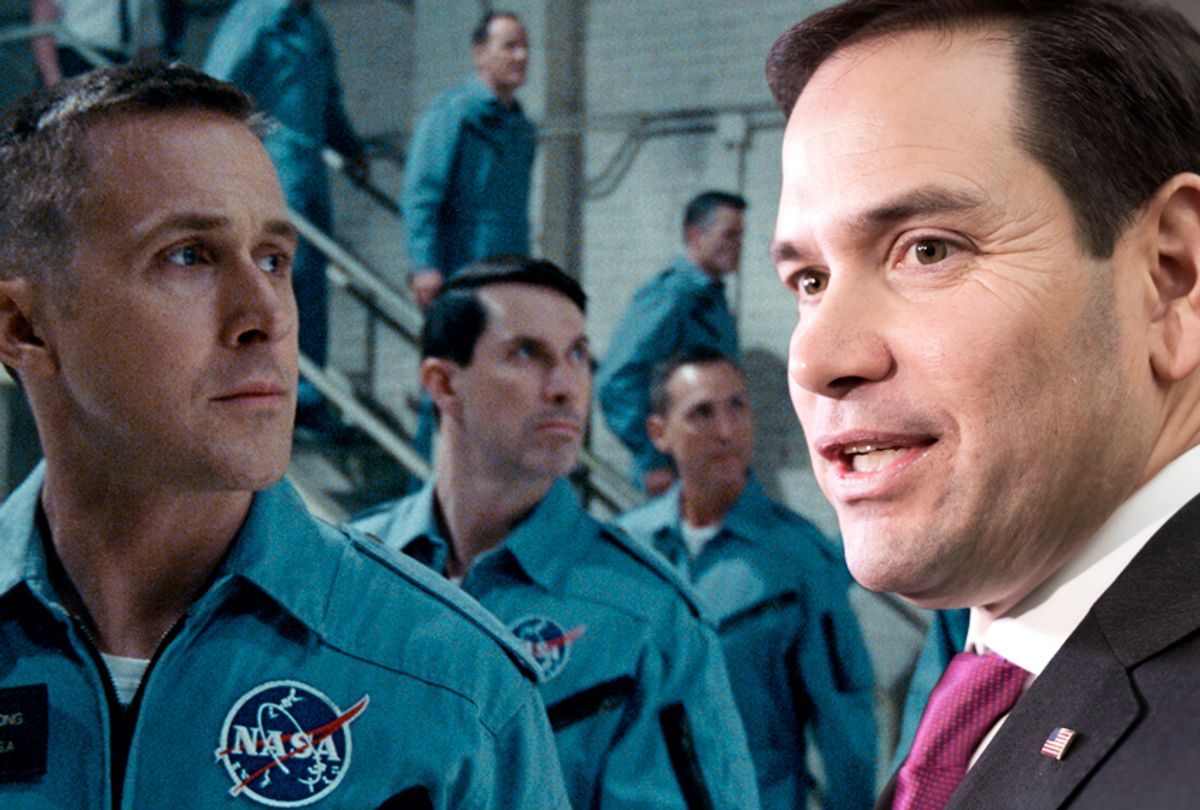 "First Man," the new Neil Armstrong biopic directed by Damien Chazelle, ("Lala Land," "Whiplash") premiered at Venice Film Festival on Wednesday to rave reviews, and some critics are already predicting that the film, which premieres in the U.S. in October, will be a serious Oscars contender. But despite "First Man's" overwhelming acclaim, some conservatives are concerned by the film's omission of Armstrong planting the American flag on the moon.

When Ryan Gosling, who plays Armstrong in the biopic, was asked about it at the Festival, he said that Armstrong's accomplishment, "transcended countries and borders," according to The Telegraph. "I think this was widely regarded in the end as a human achievement [and] that's how we chose to view it. I also think Neil was extremely humble, as were many of these astronauts, and time and time again he deferred the focus from himself to the 400,000 people who made the mission possible."

He continued, "He was reminding everyone that he was just the tip of the iceberg, and that's not just to be humble, that's also true. So I don't think that Neil viewed himself as an American hero. From my interviews with his family and people that knew him, it was quite the opposite. And we wanted the film to reflect Neil."

Gosling added, "I'm Canadian, so might have cognitive bias."

"This is total lunacy," he wrote. "And a disservice at a time when our people need reminders of what we can achieve when we work together. The American people paid for that mission, on rockets built by Americans, with American technology & carrying American astronauts. It wasn’t a UN mission."

Far-right pundit Jim Hoft had even stronger words. In a post about the omitted scene, Hoft wrote, "The Anti-American propagandists in Hollywood continue their assault on America and the Christian faith," adding that Hollywood has "whitewashed" America from the story because "It doesn’t fit their narrative they are trying to tell — that America was never great." Hoft also claimed that "First Man" purposefully left out a detail that astronaut Edwin "Buzz" Aldrin "received Holy Communion when the lunar module landed on the moon."

The National Review described the decision to leave out the planting of the American flag in favor of a more universal message as "daft." "It’s more faithful to Neil Armstrong, who died in 2012, to leave out the thrilling moment when he placed the flag on the lunar surface. This is daft. Congress discussed placing a U.N. flag on the moon instead but ultimately decided that an American project should be celebrated with an American symbol," critic Kyle Smith wrote. "History sure can be inconvenient when patriotism makes you queasy."

"Fox & Friends" also discussed the film's choice and described the humanistic approach to the story as Hollywood rewriting history.

"Uh, here’s what I think: Ryan Gosling is an idiot," co-host Pete Hegseth said. "He’s a global citizen who thinks a bunch of humans got together and said we’re going to go to the moon. No, one country, propelled by capitalism, by free people, with a vision, said we’re going to do this," he continued. "Yet revisionist actors in Hollywood then preach to us that it was a human achievement, and America didn't have anything to do with it?"

"This is where our country’s going," co-host Ainsley Earhardt added. "They don’t think America is great, they want to kneel for the flag, for the anthem. They’re scared to use the American flag. It’s Hollywood.”

Despite the criticism from the right, other critics have pointed out the strength in widening the gaze of film, from Armstrong, or even America, to the world at large. "What is perhaps most notable is the film’s refusal to engage in the expected jingoistic self-celebration that such a milestone would seem to demand," according to the Hollywood Reporter. "At a time when the toxic political climate has cheapened that kind of nationalistic fervor, turning it into empty rhetoric, the measured qualities of Josh Singer’s screenplay, based on James R. Hansen’s 2005 biography of Armstrong, are to be savored."