Why do Republicans prefer a racist Democrat to John McCain? Because they're craven hypocrites

Renaming the Senate office building for the late GOP hero seemed like a slam dunk. Then Republicans hit a new low 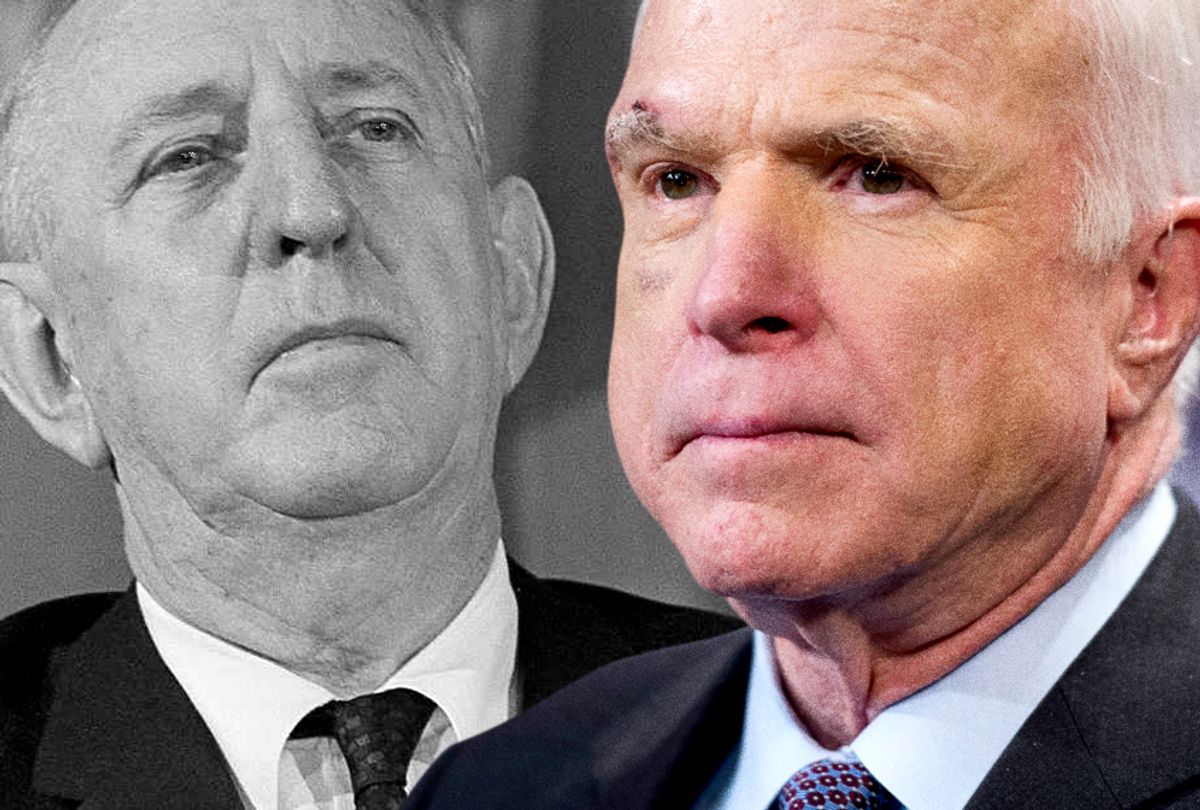 This week's memorial to the late Sen. John McCain has not brought out the best in President Trump. Indeed, he seems to be increasingly upset as he obsessively watches cable news and sees the drama of the funeral and all the accolades pouring in from around the world in tribute to the nation's most famous elder statesman.

Trump's behavior on the announcement of McCain's passing was typically boorish and crass, and as the mourning period goes on he seems to be doing everything short of turning cartwheels in the Rose Garden to get attention. He has pushed White House counsel Don McGahn out the door on Twitter and made clear that he'll let Jeff Sessions stay on as attorney general until the midterms, pretty much putting Robert Mueller on notice. Grace of any kind is not this president's strong suit.

Congressional Republicans have by and large behaved with more dignity, although that's a very low bar. Most members gave stirring encomiums to their late comrade on the Senate floor this week, undoubtedly annoying Trump to no end. There were a few noteworthy exceptions. Sen. James Inhofe of Oklahoma defended Trump's petulant behavior, saying, "Well, you know, frankly, I think that John McCain is partially to blame for that because he is very outspoken." Apparently, disagreeing with Trump means you deserve to be treated disrespectfully upon your death regardless of your years of government service. Good to know.

McCain's stalwart BFF, Sen. Lindsey Graham, R-S.C., also hedged about Trump's sour attitude, first saying, "Clearly, they had a contentious relationship, but he’s not the only one to have a tense relationship with John McCain. How the president feels about Sen. McCain is his right to feel any way he’d like."

Graham also claimed that the president generously told White House Chief of Staff John Kelly that the McCain family should get "whatever they need."  Then, on Thursday, Graham shifted gears, telling CBS News, "It bothers me greatly when the president says things about John McCain. It pisses me off to no end. And the way he handled the passing of John is just — it was disturbing." This isn't the only time in recent days that Graham has behaved erratically, but it's perhaps the most surprising.

On the news of McCain's passing, Sen. Chuck Schumer, D-N.Y., the minority leader, had immediately proposed that the Russell Senate Office Building be renamed for the late Arizona senator. It seemed like a rare winning bipartisan issue, with no obvious downside for either team. Democrats would like to rename the building anyway since Sen. Richard Russell, a powerful Georgia Democrat who served from 1933 to 1971, was a notorious segregationist who led Southern opposition to the civil rights movement, using every parliamentary trick in the book to stymie bills to ban the poll tax or outlaw lynching. Russell co-authored the “Southern Manifesto” in 1956, opposing school desegregation, and even proposed bills to remove all African-Americans from the South.

Despite all that, it's proving nearly impossible to replace Russell's name on that building in this polarized political environment. McCain, at this moment, is probably the only deceased senator a majority could possibly agree upon. Which is not to say McCain's legacy on civil rights was unblemished. He expressed regret in his later years for his early vote against the Martin Luther King Jr. national holiday and apologized for various other insensitive remarks and votes. He certainly was not the worst Republican on racial issues or civil rights, but that's not saying much.

One would expect that Republicans would be anxious to name the Senate's principal office building after one of their own. They could even commission a statue. (Russell has one.) But no. What seemed like a slam dunk has run into serious resistance -- and not from Democrats, who might have been expected to express reservations about conferring such an honor on a conservative Republican. It's the Republicans who are resisting, and their reasons why are revealing.

First, the McCain proposal is clearly a problem for Republican senators because it will upset the president. None of them has said that openly, but they calculate all their decisions through the prism of Trump's childish needs and wants these days. And let's face it: Chuck Schumer is trolling Trump just a little with this suggestion. Trump would see GOP acquiescence, even on this entirely symbolic issue, as disloyalty. We all know how he feels about that.

But in fact, what's really holding up this name change is something else entirely. The first Republican senators to come out against the idea were from Georgia, Russell's home state. It's doubtful that more than a few of their constituents even remember Russell, who's been dead for 47 years. But the state's two current senators seem to believe there are enough of them to justify clinging to the old segregationist. Sen. David Perdue, R-Ga., complained that it wasn't fair to remove Russell's name over just "one issue" when he had supported many other things, including the Great Society and the War on Poverty. (Notably, Perdue and other Republicans think those were terrible failures -- but whatever.)

One might chalk that up to home-state pride if it weren't for the fact that other Southern Republicans are also stepping up to defend Russell. Majority Leader Mitch McConnell, R-Ky., said he'd prefer to name a commission to study how best to honor McCain, while Sen. Bill Cassidy of Louisiana said the Senate needed to "find another way." Sen. Richard Shelby of Alabama was good enough to come right out and say it, as Huffington Post reported:

“Richard Russell was from the south and, I’m sure, not perfect like George Washington and everyone else in his day. But he was a well-respected senator. You want to get into that, [then] you have to get into George Washington and Thomas Jefferson and most of our Founding Fathers, maybe with the exception of Hamilton. It’s easy to prejudge what they should have done. We didn’t live in that era."

Huffington Post mentioned to Shelby that Washington and Jefferson lived more than a hundred years before Russell. The senator responded by saying, “They did, but so did others." We can be glad he has such a clear grasp of history.

This whole charade puts the lie one more time to the fatuous argument made by right-wingers like Dinesh D'Souza  that there was no such thing as a Republican "Southern Strategy," and that somehow the racist Southern Democrats of days gone by remain in the party while Southern Republicans are colorblind. That's an absurd assertion on its face. At this point, Southern Democrats are largely African-American, and the occasional white Democrat who actually wins an election, like Sen. Doug Jones of Alabama, is heavily dependent on black votes. Only one party is defending the name and legacy of one of the most prominent Democratic segregationists of the 20th century, and it's not the Democrats.