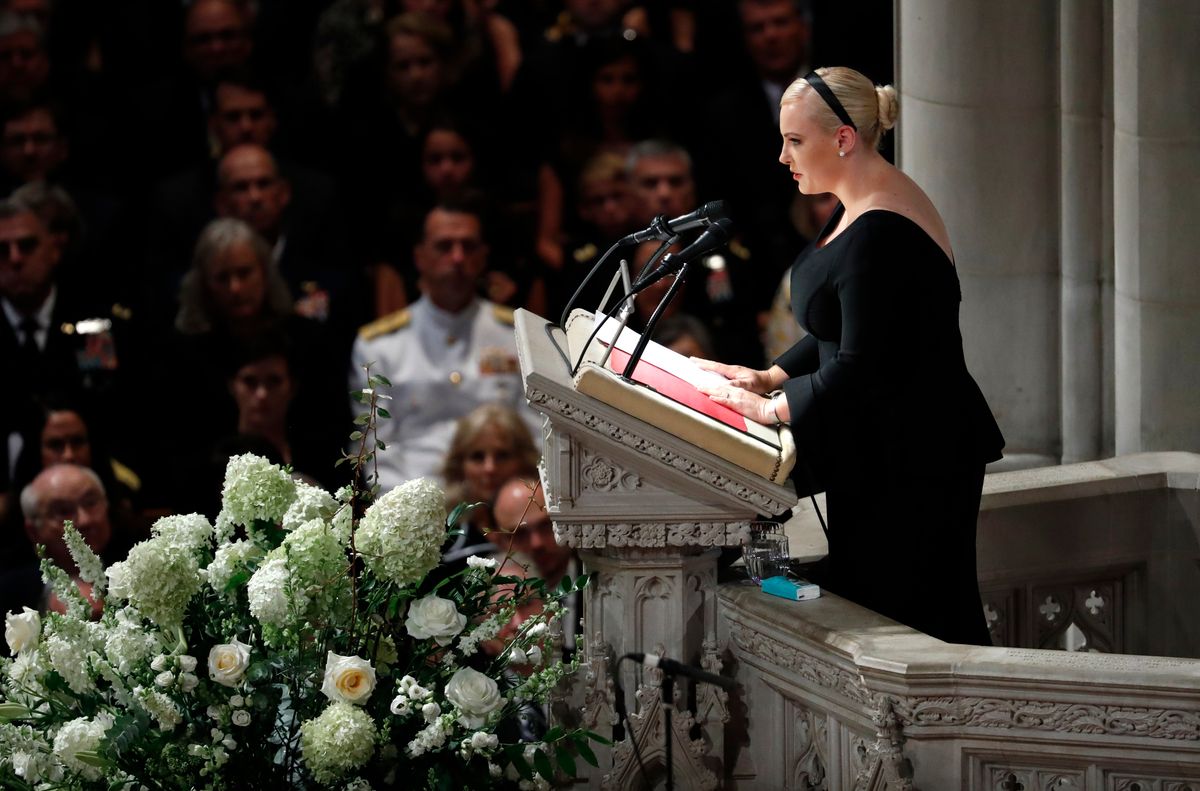 John McCain's funeral on Saturday was a rare event that championed bipartisanship. Leaders from both sides of the aisle came together to lay to rest a respected senator. Not everyone was pleased with some of the eulogies, however, as some felt that the rhetoric needlessly needled President Donald Trump.

After the funeral, Trump supporters took to social media to express disappointment that the ceremony got political. The president's name was never mentioned in the speeches, yet Trump's fans clearly recognized who was the butt of the joke. Some quotes from the funeral — compiled by The Hill — did seem to, indirectly, knock Trump:

“He was a great man," McCain's daughter, Meghan, said. "We gather to mourn the passing of American greatness, the real thing, not cheap rhetoric from men who will never come near the sacrifice, those that live lives of comfort and privilege while he suffered and served.”

"Part of what makes our country great is that our membership is based not on our bloodline, not what we look like, what our last names are," former President Barack Obama said. "It's not based on where our parents or grandparents came from or how recently they arrived, but on adherence to a common creed that all of us are created equal."

"He loved freedom with a passion of a man who knew its absence," former President George W. Bush said. "He respected the dignity inherent in every life, a dignity that does not stop at borders and cannot be erased by dictators."

Even Jesus, our savior, had a simple Funeral. I'm sorry. I just can't hold back with all this pomp and ceremony. I find it rather disturbing and distasteful.

Thinking about funerals: I hope I have lots of time but if not: anyone can come, will be about God and not politics, and celebrate. — Matt Schlapp (@mschlapp) September 2, 2018

Leftist propaganda does not work on me—even when it comes in the form of a lavish funeral. #McCainMemorial — Candace Owens (@RealCandaceO) September 1, 2018

It's too bad she can't participate in a funeral instead of lobbing political hand grenades. — Ken Cuccinelli (@KenCuccinelli) September 1, 2018

Sadly, @MeghanMcCain seemed to do exactly what she slammed Trump for doing. What should have been reflection and celebration of a patriot’s life, has been turned into political theatrics and cheap shots. It’s embarrassing, and really disappointing. https://t.co/xVK1PxOkVf — Bernard B. Kerik (@BernardKerik) September 1, 2018

This seems completely uncalled for under the circumstances. pic.twitter.com/YhGKySCa6Y — Jazz Shaw (@JazzShaw) September 2, 2018

Many impartial observers noticed that Trump supporters were inferring the president's presence in the speeches all on their own. Again, none of the speakers at the funeral — not Obama or Bush or McCain — used Trump's name. Yet, apparently Trump's fans identified him. Some D.C. pundits asked on Twitter what this said about the president.

I re-read all the speeches from McCain’s funeral. Nobody attacked Trump. They *praised* honor, decency, character, bipartisanship, and placing country over party. What does it say about Trump that so many people interpreted this as an assault on him personally? — Ryan Lizza (@RyanLizza) September 2, 2018

Unclear whether all of the eulogists today accused of attacking Trump were actually attacking Trump. But when vague truisms about American values & fighting abuse of power sound like they *could* be a subtweet of a sitting president, that is perhaps the biggest indictment of all — Catherine Rampell (@crampell) September 1, 2018