A decade after the big crash, Trump’s rise to power is the most obvious consequence of poor governance 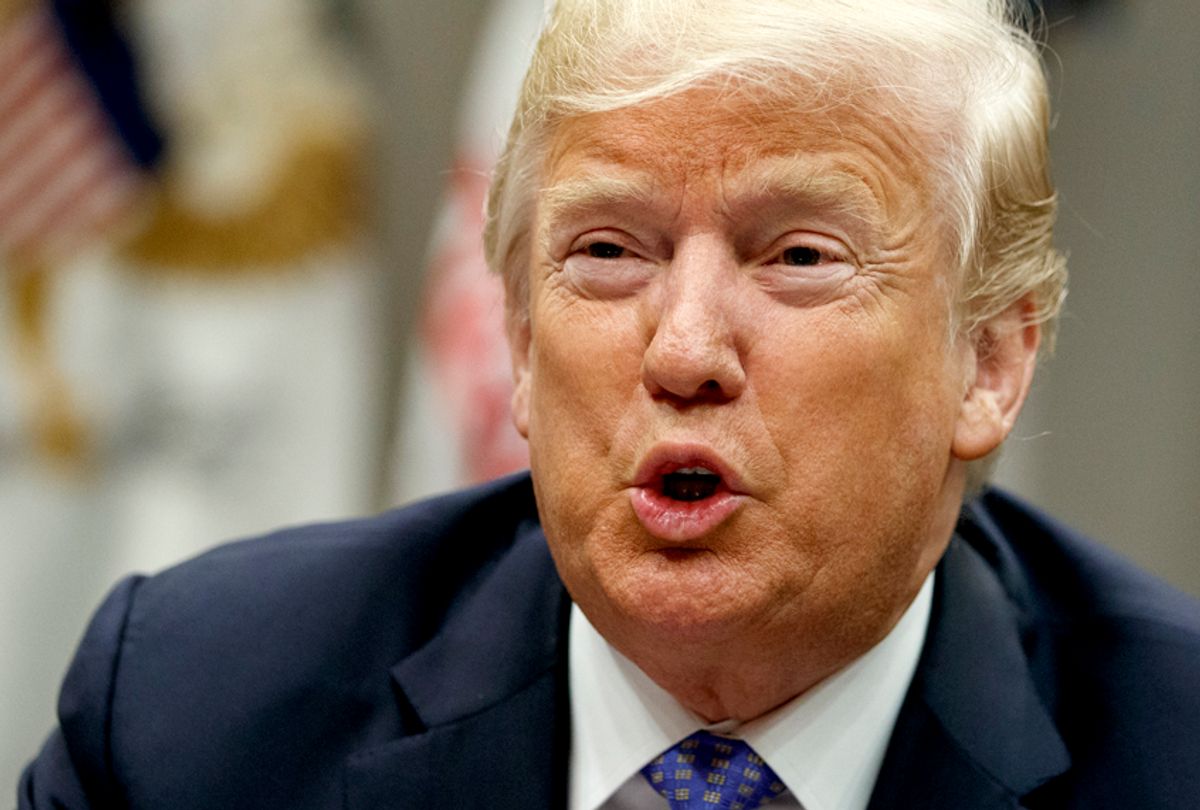 In the aftermath of the worst financial crisis since the Great Depression, bank officials at HSBC admitted to the Department of Justice that the bank violated the Bank Secrecy Act, the International Emergency Economic Powers Act and the Trading with the Enemy Act. This amounted to one of the largest and most destructive money laundering and anti-terror finance sanctions-busting in history. Fines were leveled, but no senior bankers went to jail.

In another investigation, the DOJ implicated Deutsche Bank and UBS in a bid-rigging cartel that illegally manipulated LIBOR, the most important global benchmark interest rate. Professor Bill Black estimates that the “dollar amount of deals affected by the collusion range[s] from $300-550 trillion in deals manipulated at any given time.” It was a scandal that may have been history’s largest financial crime, yet the U.S. Department of Justice refused to prosecute any of the elite bank officers involved.

As we approach the 10th anniversary of the 2008 crash, ProPublica’s Jesse Eisinger reminds us that no top bankers were ever “held accountable for the biggest financial crisis since the Great Depression. … No one. No top officer from any major bank went to prison.” All of these instances of corporate corruption occurred well before Donald Trump’s election. Trump stands accused of much the same. But how do you make a political case for the latter’s impeachment on the grounds of corporate corruption (even as the president virtually daily violates the Constitution’s Emoluments Clause), given the earlier reticence of multitudes of politicians, regulators and DOJ officials to prosecute similar white-collar crimes whose impact dwarfed those allegedly committed by America’s 45th president?

It says something about the way we have (to paraphrase the late Sen. Daniel Patrick Moynihan) as a society gotten very soft on criminal deviancy that the practices alleged to have been perpetrated by Trump not only in the 2016 election, but also for decades before in his real estate ventures, no longer appear to be disqualifications for the office of the presidency, let alone grounds for impeachment. The Obama administration’s embrace of the concept that senior officers at the systemically dangerous institutions (SDIs), particularly the largest banks, were “too big to jail,” meant that the bankers who grew wealthy from leading the largest and most destructive fraud schemes in banking history got off scot-free. They also created a context in which the business practices of a candidate like Donald Trump were normalized to a degree that they were considered an insufficient bar to block him from the presidency.

These facts are worth recalling in the context of the recent convictions of former Trump campaign chairman Paul Manafort on charges related to bank and tax fraud, and the guilty plea by former Trump lawyer Michael Cohen, who directly implicated the president in campaign finance law violations. As sordid as their actions were, they are small beer compared to what took place in the decade, in which a whole industry literally succumbed to an epidemic of fraud, money laundering, and other forms of malfeasance.

Of course, one shouldn’t ignore the role of the GOP in terms of fomenting this degradation of the rule of law (clearly George W. Bush’s gutting of the SEC, his refusal to devote more fiscal resources to the hiring of additional FBI field officers to investigate financial fraud, and his appointments of Goldman Sachs’ Hank Paulson at Treasury and Alberto Gonzales as attorney general, all contributed to this “criminogenic environment”). However, it is largely the Democratic Party today that is seeking to position itself as a quasi-constitutional brake on this lawless presidency, which, given their minority political status, means using the courts to save the country from a descent into total constitutional anarchy.

But the Democratic Party’s ongoing obeisance to its Wall Street donor class via its longstanding embrace of financial deregulation (especially prolific during the tenure of Robert Rubin as Treasury secretary in the 1990s), and its correspondingly supine response to the consequences of said deregulation during the Obama administration, means that Democrats are poorly placed to mount a credible case for impeachment today on the basis of Trump’s sleazy business practices.

During the 2016 election campaign, Trump cynically exploited people’s anger at the widespread sense of a judicial system heavily tilted against the average American, as well as highlighting the unsavory alliance between the “swamp” in Washington and Wall Street, all while reminding voters of the Democrats’ role in the financial deregulation that helped destroy the global economy years later. Sincere or not, contrast this to Obama’s breezy comments on the money awarded to the CEOs of JP Morgan Chase and Goldman Sachs respectively, Jamie Dimon and Lloyd Blankfein. Although Obama initially condemned the “obscene” bonuses of Wall Street “fat cats,” by 2010 Business Insider reported the president was “totally cool” with the awards to these “very savvy businessmen”:

“I, like most of the American people, don’t begrudge people success or wealth. That is part of the free-market system.”

The American people generally don’t “begrudge people success or wealth” if it is achieved honestly. What Obama failed to acknowledge is that the electorate was revolted when such wealth was accumulated on the back of pervasive fraud and government bailouts, or when people had experienced a sense that things were rigged against them in their own economic lives. It is important to recall this context as we ponder the miasma of prosecutions, indictments and guilty pleas that have emerged from special counsel Robert Mueller’s ongoing investigations of the Trump administration. In aggregate, the indictments and guilty pleas have added to the overall picture that Mueller has been investigating an organized crime syndicate (albeit one in which Fredo was the only Corleone brother to survive and ended up running the show), as opposed to the administration of the so-called leader of the Western world.

But have these convictions given renewed momentum toward removing Trump via impeachment? They seem to reflect business as usual in relation to the pervasive corruption uncovered in the aftermath of the 2008 crisis, a profoundly inconvenient fact for those who persist in the delusion that America’s institutional framework and its alleged attachment to the rule of law could prevent the descent of this country into a kind of fascist authoritarianism.

The Obama presidency is now viewed fondly through the prism of the nightmare that is Trump. But what did the 44th president (or his treasury secretary, or attorney general) do when confronted with the epidemic of fraud and malfeasance that gave us the nightmare of 2008? Basically nothing. Bankers were given a “get out jail free” card. Indeed, given the persistent tolerance of the crimes of wealthy CEOs, it’s hard to believe that Paul Manafort would be the object of a criminal investigation today if he had stayed out of the 2016 presidential campaign, let alone Donald Trump.

As Eisinger has argued, the DOJ “occasionally brings charges against lower-level executives of major corporations, but hasn’t held the chief of a Fortune 500 company accountable in more than a decade,” which foamed the runway for the current occupant of the White House. In truth, such has been the degradation in the rule of law that even now it is questionable whether white-collar crime per se constitutes a legitimate threshold to conduct impeachment proceedings. HSBC confessed to money laundering for Mexican drug cartels and evading sanctions directed against Iran. Fines were issued (equivalent to a few quarters’ profit), but that was it. No jail time. The GOP will no doubt shamelessly remind the Democrats of these inconvenient facts if the latter seeks to impeach Trump on that basis.

Any American who has recited the words of the Pledge of Allegiance knows that the rule of law is inextricably tied to the ideal of “liberty and justice for all.” There mustn’t be a two-tiered system: one for the wealthy, and one for the rest of us. The guilty plea of Michael Cohen was announced with great fanfare by Robert Khuzami, the current deputy U.S. attorney for the Southern District of New York. He proclaimed that Cohen’s conviction “serves as a reminder that we are a nation of laws, with one set of rules that applies equally to everyone.”

If Khuzami’s name rings a bell for some, it is because he was once the general counsel for the Americas for Deutsche Bank from 2004 to 2009, and then went to the SEC as head of enforcement. In the latter position, Khuzami’s intense conflicts of interest from his previous role at DB guaranteed there would be no serious investigation of collateralized debt obligation (CDO) abuses. Indeed, his career exemplifies the revolving-door culture that has characterized the D.C.-Wall Street nexus, which makes one prone to regulatory capture, and correspondingly lax when it comes to prosecuting the very rule of law that Khuzami himself trumpeted in the wake of the Cohen convictions.

There is a balancing act for people like Khuzami, needing (per Eisinger) “to display their dazzling smarts but also eventually needing to appear like reasonable people and avoid being depicted by the white-collar bar as cowboys unworthy of a prestigious partnership.” Even though, as Yves Smith of the economics blog Naked Capitalism noted, Deutsche Bank was patient zero of CDOs designed to fail for the benefit of subprime shorts, under Khuzami’s tenure at the SEC the German bank attracted virtually no scrutiny. This despite the fact that DB’s leading salesman of this toxic junk, Greg Lippmann, figures prominently in all reasonably researched accounts of pre-crisis CDOs. So much for the idea that “one set of rules … applies equally to everyone.”

The Democrats’ largely absentee approach to the problem of white-collar crime could well explain why the party and the special counsel continue their efforts to make the case for “Russian collusion.” The theory being that conspiracy with a foreign power to influence an election will create a sufficient threshold to attain the “high crimes and misdemeanors” standard needed to secure impeachment.

Treason is also sexier than white-collar crime and, in theory, easier to prosecute. But it’s still not a slam dunk. We’re now 18 months into Mueller, and polls still suggest that the Democrats have not gained sufficient political traction with this issue beyond their base. No smoking gun has yet emerged, or at least there is insufficient evidence to encourage Republicans to abandon their president. Hence, calling for impeachment remains a risky strategy if Mueller fails to deliver the goods, as it will appear to many voters that the Democrats are using a constitutional back door to overturn an election result (much as Democrats alleged during the GOP/Ken Starr-led impeachment proceedings against Bill Clinton). It’s also hard to make an impeachment case on the basis of white-collar offenses, given the Democratic Party’s historic accommodation of Wall Street criminality.

And until the Democrats come face-to-face with their legacy — their complicity in failing to bring about “change you can believe in” in the aftermath of 2008 — it will be harder for them to argue for Trump’s removal on that basis, at least to the degree that is required to secure bipartisan support. A promised “return to normality” isn’t enough, given what “normality” gave us 10 years ago. Democrats can’t enable arsonists and then complain when the fire spins out of control. But that’s exactly the situation in which we find ourselves today with our modern-day Nero tweeting as Washington continues to burn.