Sen. Dianne Feinstein is on the hot seat in D.C. and faces a tough campaign at home against a progressive opponent 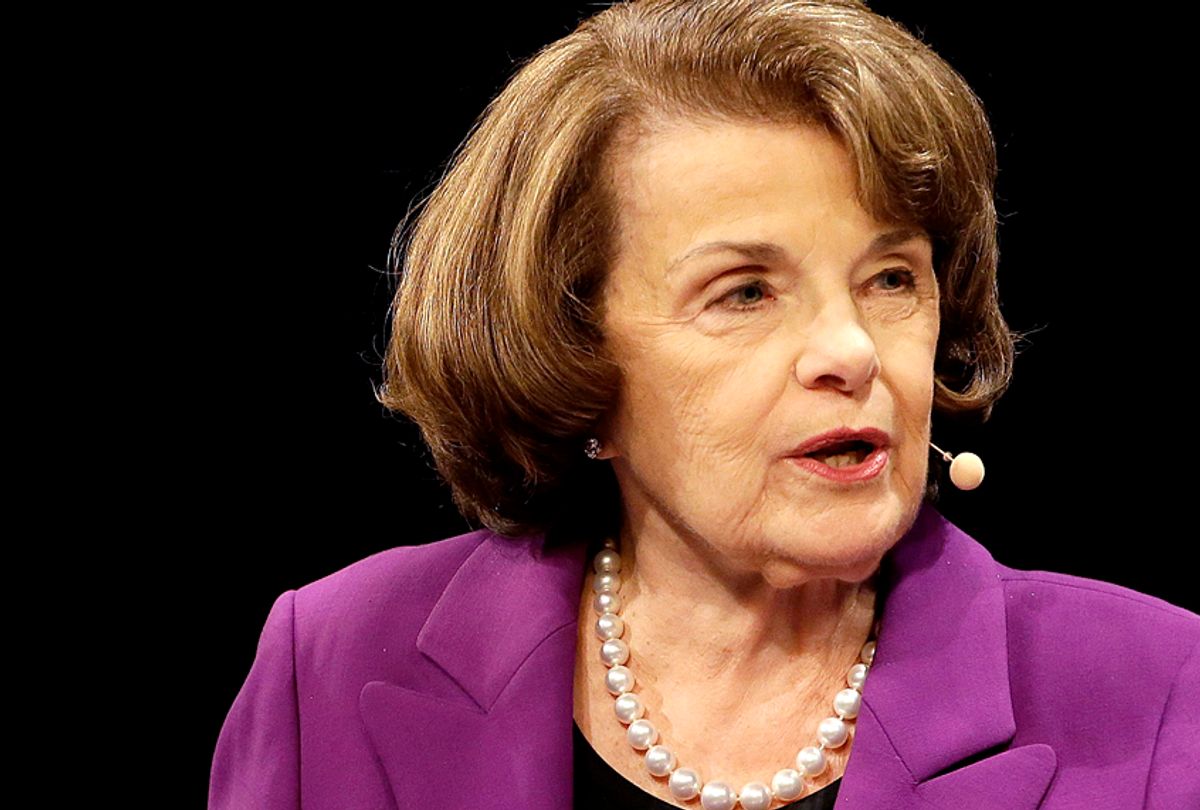 Sen. Dianne Feinstein, D-Calif., is about to begin one of the most important Supreme Court confirmation hearings of her political career.

This has less to do with the importance of the hearing itself — although the confirmation of Brett Kavanaugh to the Supreme Court would be historic, given that it would push the high court to the right for a generation — and more to do with the high stakes involved for Feinstein's own political career.

"If Sen. Feinstein doesn’t hold Brett Kavanaugh’s feet to the fire and hold Republicans' feet to the fire for the ram job that they’re trying to push here, it is to her detriment in a Senate race," Neil Sroka, a spokesman for Democracy for America, told The Hill. Democracy for America is a progressive group founded by former Vermont Gov. Howard Dean that has endorsed Feinstein's opponent in the upcoming midterm election, California state Sen. Kevin de León. While de León is also a Democrat, he's running to Feinstein's left. (California's electoral system features a nonpartisan primary, with the two top vote-getters advancing to the general election.) Sroka's statement suggests that Feinstein is likely to be attacked back home if she is perceived as overly conciliatory toward Kavanaugh.

The Hill also elaborated on the issues where Feinstein may be expected to hold Kavanaugh accountable:

Feinstein has kept her strategy close to her vest in the lead-up to Kavanaugh’s hearing, but she highlighted three issues during a conference call with reporters on Friday: Roe v. Wade, guns and Kavanaugh’s views on executive power, including prosecuting or investigating a sitting president.

“These are just a few areas we expect to explore during next week’s hearing and we welcome you all to listen,” Feinstein said.

Despite being the ranking Democrat on the committee, Feinstein has remained tight-lipped about what she discussed with Kavanaugh during their hourlong meeting last month.

Spokespeople for Feinstein didn’t respond to a request for comment on how the senator is preparing for the hearing.

Feinstein is certainly not expected to vote in favor of Kavanaugh's confirmation. When he was nominated to the Washington, D.C., appeals court in 2006, Feinstein voted against him. She also refused President Trump's invitation to hear Kavanaugh's nomination announced at the White House.

"President Trump has been crystal clear that he would put ‘pro-gun’ and ‘pro-life’ justices on the court and that Roe v. Wade would be overturned ‘automatically,’" Feinstein said after Trump announced Kavanaugh's nomination, adding that the appeals court judge "appears to meet all of President Trump’s promises for how his candidate will rule on specific issues."

The underlying issue for Feinstein, however, isn't about how she votes on Kavanaugh, but whether she can use her position as the top ranking Democrat on the Senate Judiciary Committee to torpedo his nomination. Given that Republicans have removed the filibuster for Supreme Court nominees and hold 50 seats in the Senate (following the death of John McCain), that remains unlikely. Kavanaugh's confirmation can only be defeated if every Senate Democrat, both independents and at least one Republican vote against him.