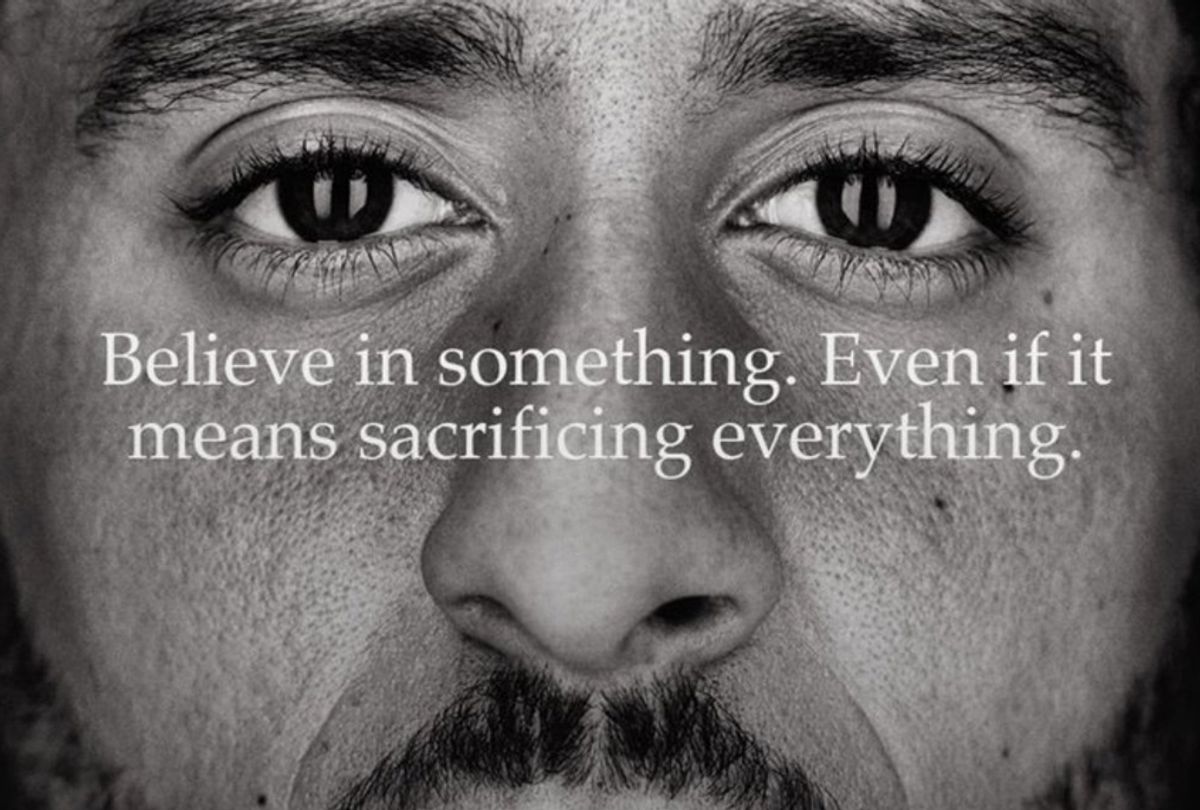 Frustrated self-proclaimed patriots clipped up and burned their personal Nike apparel yesterday after former NFL quarterback Colin Kaepernick was revealed to be the face of the athletic giant's Just Do It campaign's 30th anniversary ads. Kaepernick emerged as a lightning rod for conservative criticism when he began kneeling during the pre-game playing of the national anthem to protest racial injustice during the 2016-17 NFL season, after which many other athletes, including NFL players, followed suit.

After Nike revealed its Kaepernick ad, #NikeBoycott started trending on Twitter. A click of the hashtag delivers a scroll with a mix of both extremely happy and  angry Nike patrons.

The first image released by the company features Kap’s face in black and white. The text reads, "Believe in something. Even if it means sacrificing everything." And that's exactly what the superstar did. The 30-year-old former San Francisco 49er caught the nation's attention back in 2016 when he decided sit during pre-game playings of the national anthem as a silent protest against police violence in America. Many conservatives including Donald Trump were — or pretended to be — offended, interpreting his actions as disrespectful to the military, which Kaepernick has said was not his intention. After a conversation with Army veteran and former Seahawks long snapper Nate Boyer, he took Boyer's suggestion that he kneel instead of sitting down, and that became Kaepernick's signature protest move.

“I expressed to him, maybe there’s a different way of demonstrating, where you’re showing more respect for those who laid down their lives for what that flag and anthem stand for,” Boyer said. “I suggested kneeling, because people kneel to pray; we’ll kneel in front of a fallen brother’s grave.”

Kap listened to Boyer and ended up becoming the leader of a movement of athletes engaged in nonviolent protest against American injustices. His revolutionary actions made him an icon, while at the same time allegedly keeping him from being hired by another NFL team, even though he remains one of the top rated and most effective available players. As The Washington Post writes, “Colin Kaepernick is statistically superior to half of the NFL’s backups and deserves a job.” Kaepernick is currently suing the NFL over alleged collusion to keep him off the field after he became a free agent.

Kap didn’t stay at home sitting on his hands while unemployed, though.  He raised over a million dollars for grassroots organizations committed to change — not millionaire TV activists or corporate nonprofits, but respected local groups who know their subjects and have deep roots in their respective communities, like LBS (Leaders of a Beautiful Struggle) in Baltimore.

"We believe Colin is one of the most inspirational athletes of this generation, who has leveraged the power of sport to help move the world forward.” Gino Fisanotti, Nike's vice president of brand marketing, told ESPN magazine. “We wanted to energize its meaning and introduce 'Just Do It' to a new generation of athletes."

The loyal Kaepernick haters venting their anger at Nike claim it's not about racism, but about Kap disrespecting the American flag. Their ignorance shows, considering that Kap has never said anything negative or disrespectful about the military. He clearly stated that his protest was about police violence.

“I am not going to stand up to show pride in a flag for a country that oppresses black people and people of color. To me, this is bigger than football and it would be selfish on my part to look the other way," he said. "There are bodies in the street and people getting paid leave and getting away with murder.”

But ignore his statement. Here’s another thought: Loyal Kaepernick haters and veterans should be able to burn their Nike apparel freely. After all, they paid for it. But what’s sad is that our country has tens of thousands of veterans living on the streets and in homeless shelters. So if they love America so much, like they say they do, why burn their Nikes? Why not give them to the brothers and sisters who proudly served this country and fell on hard times? They need that energy, love and attention more than Nike and Kaepernick do. Country first, right? Or is it race, pop culture and football first?

Other athletes featured in the "Just Do It" campaign include Odell Beckham Jr., Shaquem Griffin, Lacey Baker, LeBron James and Serena Williams, who has proven to be one of the most amazing tennis players ever, making history time and time again. Yet at the Western & Southern Open in 2016, Williams earned $495,000 while Roger Federer received $731,000 for bringing home the same trophy, on the top of the estimated $58 million in endorsements he receives in comparison to her $13 million.

Injustices are happing all over this country, and in the world in general. Are conservatives going to burn Federer apparel and tennis memorabilia now to support Serena? I’ll wait.