A Canadian mathematician identifies the themes and patterns in Donald Trump's Twitter feed. 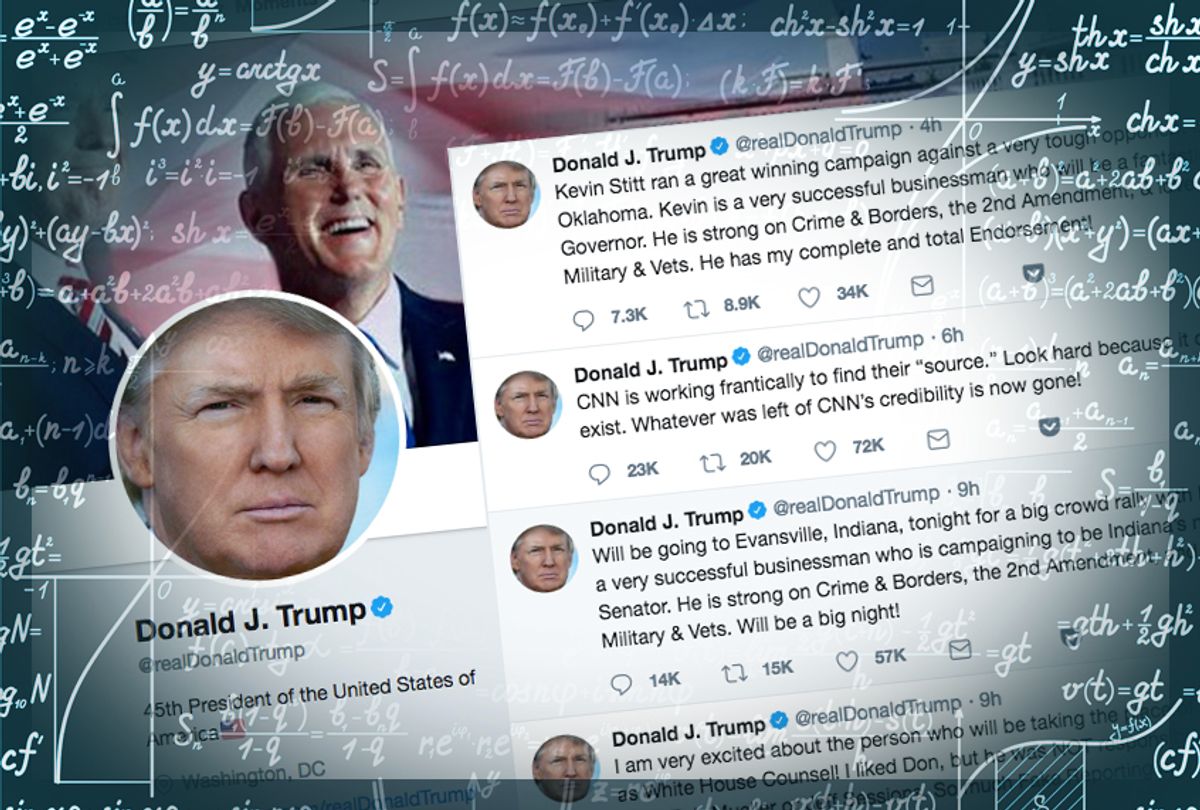 Donald Trump is a master of chaos, waging his own personal war on truth and reality. Primarily using Twitter, his favored mode of communication, Trump bestows praise and condemnation as a way of leaving both his friends and enemies unbalanced and in fear. This is a means of extending his influence and power. Trump is undeniably a master communicator. His style may be unconventional and confusing -- he focuses on emotions rather than facts, and appears only barely literate -- but it is remarkably effective in maintaining his popularity among his followers.

Outsiders, those who are not members of Trump's political cult, are of course flummoxed or enraged by Trump's Twitter rhetoric.

The last few weeks have offered many such examples: Trump has suggested that his television interview with NBC's Lester Holt last year, in which he admitted to firing FBI Director James Comey in order to shut down the Russia investigation, had somehow been faked or manipulated. He has implied that the news media, led by CNN, NBC and other networks, is involved in a conspiracy against him. He has said on Twitter that "fake books" are being written about him that are "full of fiction." He has also said that Google and other online search engines are rigging their results against him and other conservatives and that this is somehow "illegal."

Twitter is how Trump communicates directly with the public. It also allows him to set the agenda for the corporate news media, which often feels required to focus on his every pronouncement -- however false or delusional those may be.

Some would like to believe that Donald Trump is humiliating himself on Twitter because of his misspellings, his random capitalization and his poor grammar. In reality, such "errors" are intentional. They create a sense of "authenticity" and make him more "relatable" to his public -- a group of people he actually holds in contempt.

As philosopher and sociologist Theodor Adorno observed decades ago, the followers of authoritarian movements are drawn toward such "little big men." It's a paradox of sorts: The leader of the right-wing populist movement is socially superior to his worshipers, yet is also understood to be "just like them."

In total, there is a clear strategy to Donald Trump's use of Twitter. New research by Ryerson University mathematics professor Anthony Bonato and his colleague Lyndsay Roach explains the repeated themes and concepts that Donald Trump channels on Twitter, how they relate to one another, and the potential implications for American democracy. Their research also reveals how Trump uses Twitter to shape the news media's coverage as the latter struggles to come to terms with his enduring appeal -- and with the way he has turned his public against the very concept of a free press.

I recently spoke with Anthony Bonato about his groundbreaking research into Donald Trump's us of Twitter. This conversation has been edited for clarity and length.

How do you make sense of Trump's election and rise to power. Given your research what is surprising or unusual to you?

Trump is the first Twitter president. Twitter has hundreds of millions of users, with some estimates being as high as 300 million. Seventy million of them live in the United States. Many of them are younger and educated. We are also seeing that people are getting their news from Twitter and from other social media sites. Given his comfort with the medium, Twitter is a good tool for Trump. Of course previous presidents, most notably Barack Obama, have used Twitter, but Trump's style of tweeting is different.

Some of his tweets are probably crafted by media professionals, but I think that many of his tweets are written by him and are very personal. He repeats a lot of the same things over and over, such as "fake news." "media" and "bad," or "Hillary Clinton" and "crooked." He has 50 million or so followers, and through repetition and sheer numbers that definitely has an impact on the way people think about issues.

Do you think his use of Twitter is priming people's moods and beliefs to create a type of future change? Or is Trump responding to current events?

News networks such as CNN, BBC and CBC here in my country of Canada, quote his tweets often. In fact, the stories are often about Trump's tweets. Trump is in such an unusual situation. He fired his secretary of state, Rex Tillerson, on Twitter. There are arguably no other political figures, or public figures in general, who have that kind of impact. So I don’t know if there's some sort of massive strategy, but certainly what the research shows is that there are five topics which occur again and again in each of the four years that we examined in our new research.

What are those specific themes and topics?

They change year to year. For example, in 2015, which was the first year we looked at and was the [beginning of the] Republican primary, Trump is focusing mainly on his opponents like Ted Cruz and Marco Rubio and Jeb Bush and so on. He's talking about the media even then, and connecting the media to Obama and Hillary Clinton. If you go to 2016 when he wins the Republican nomination, Trump is now focusing mainly on the Democrats. But he is also talking about swing states.

Then you also see "Hillary Clinton" being connected with "emails" and the "FBI." Then into his presidency in 2017, Trump is talking about policy issues. But there is a clear-cut difference between domestic and international issues in how he uses Twitter. He does talk about things like North Korea, China, "security" and so on in one grouping.

How did you analyze Donald Trump's use of Twitter? Explain your methodology.

Networks are a way of looking at data. They've been around for centuries. But in the last 20 years or so, we started to develop a field that's now called "network science" where we look at the underlying properties of networks. Networks are essentially dots and lines. What we study are interactions, to determine on an interactive scale how things are working together or not. In this research we examined Trump's tweets, which have all been archived at Github. We then looked for relationships and how often certain words and phrases are used together to develop a sense of Trump's themes.

Trump is waging a form of information warfare. How does he use Twitter to shape public opinion as well as the public mood more generally?

Trump has really caught the traditional media off guard. He's using Twitter in a way that I think media and other analysts are reacting to; they are on the defense. Trump is leading the conversation. There's such a sheer volume of tweets. He tweets about so many different topics, and about things which are unorthodox and controversial. Most other political figures would not be talking about such issues in the way he is. Trump is setting the policy agenda through Twitter. There are literally dozens of examples of this, such as his ban on transgender soldiers. This is something that journalists and others really need to provide more focus on and context for.

How can Democrats use your findings about Trump's use of Twitter to fight back against him?

The macro-level scale of how all these keywords interact is very revealing. We need political scientists to delve deeper and look at the semantic connections of what these words all mean and their interactions. If you were on Trump's side, maybe they are planning out their next block of topics for the next quarter of 2018. For everyone else -- people in the media, journalists, Democrats -- I think it's important to understand what your opponent is thinking and talking about.

NBC reporter tells Salon Talks what it's like being a key target of Donald Trump.