Just how likely is it that a Trump impeachment will cause a stock market crash?

His 500-odd day administration has fed a 3,500 day boom with tax cuts and deregulation; Trump is not the market 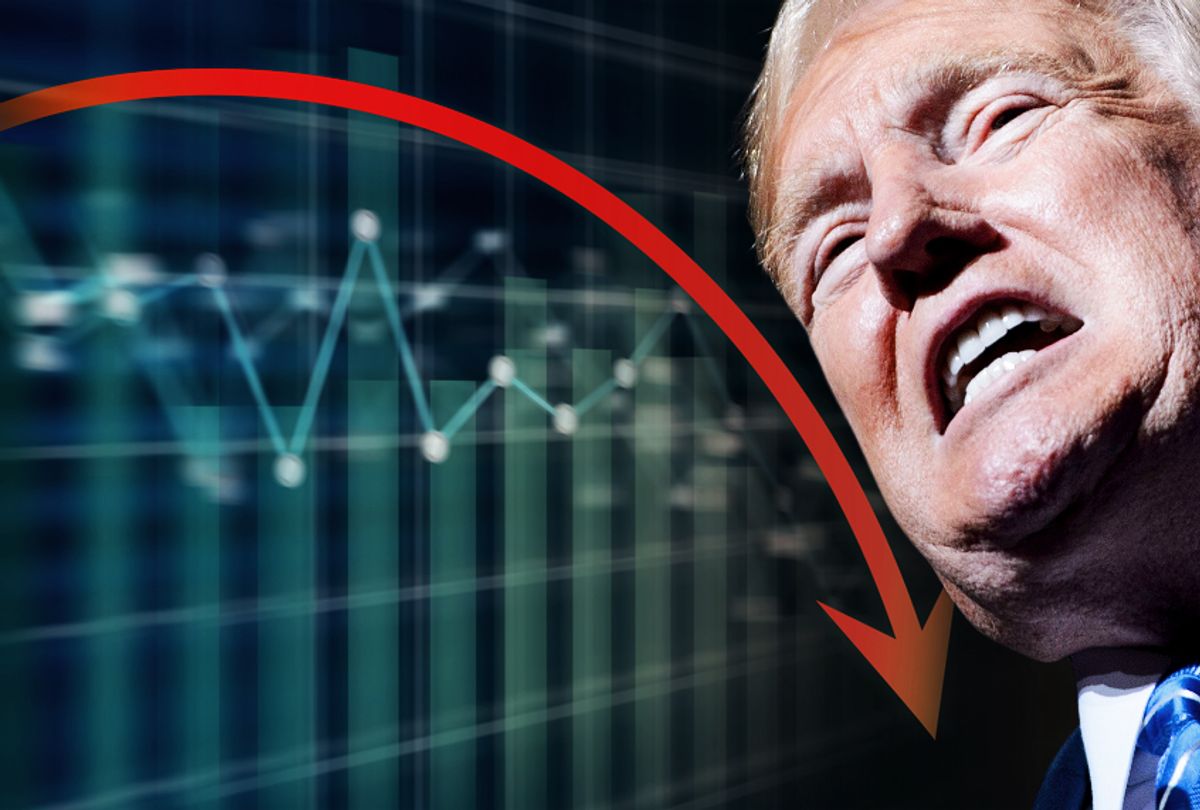 If he is impeached, President Trump insists that the stock market would crash bigly and “everyone would be very poor.”

Trump’s comments reflect the astonishing recent success of the stock market. The S&P 500 and Nasdaq have just reached record highs and we have witnessed the longest bull market in U.S. history, lasting longer than 3,453 days and reaching $18.4 trillion in value. Donald Trump wants to associate his fate with its health, but it ain’t necessarily so.

First, some context. A few key Republican donors believe Donald Trump’s policies will lead to recession all by themselves without impeachment. Further, for Donald Trump to be impeached, Democrats would have to win control of the House of Representatives in the 2018 midterm elections and vote to impeach him. But he wouldn’t be removed from office. Trump would almost certainly be acquitted in what would be the third Senate impeachment trial in U.S. history (after Andrew Jackson and Bill Clinton), as it would take 67 votes to convict him and Republican senators would protect him.

There is also a backstory behind Trump’s insistence that impeachment is bad for the stock market. During Watergate and President Nixon’s pending impeachment, the S&P index fell 14 percent. But it is important to note that there was also a global oil shock, volatility in the Middle East, and rampant inflation at that time, so the threat of impeachment didn’t tank the market all by itself.

If Trump is impeached by the House, there will be turmoil and confusion, which the market hates. But it likely won’t crash. Since he probably won’t leave office, investors will most likely bake this upheaval into their pricing model. The real shock to financial markets would be a Democratic House takeover, which would both limit the current Administration’s ability to advance its business-friendly policy goals and tie them up in numerous investigations from Democrat-led, subpoena-driven House committee investigations.

There are two main reasons why the stock market, and the general U.S. economy, will likely continue on firm footing for the near term, even if the US chief executive is impeached. First, even if impeached, Trump won’t be leaving office, so his policies will continue. Second, and perhaps more important, the economic context both domestically and internationally is very much in the market’s favor.

The fundamentals of the Trump economy have essentially been set. From the beginning, this Administration has focused on cutting taxes and reducing regulations. Its accomplishments are undeniable. The White House signed an historic tax cut in 2017 and has aggressively eliminated regulations across most federal agencies, sending a strong signal to finance and business, where its priorities lie. These policies will continue and will sustain a growth environment for business.

Make no mistake, this has been a good time for business, which has driven this unprecedented stock market run. Profits at S&P 500 companies increased an estimated 23.5 percent in the three months through June 2018, exceeding revenue growth by over 250 percent in the same period. Consumer product companies are thrilled with the business climate. Target Corp CEO, Brian Cornell, stated that "There's no doubt that, like others, we're currently benefiting from a very strong consumer environment — perhaps the strongest I've seen in my career." Whirlpool Corp. Chief Financial Officer, James Peters, noted that “We are encouraged by the strength of the U.S. economy, including low unemployment and healthy housing demand.”

Ironically, while the market value of the S&P 500 has grown 312 percent since March 2009, the number of shares have fallen 3.1 percent. This is primarily because, having generated large amounts of capital and profits from lower taxes, many U.S. companies have primarily engaged in enormous numbers of stock buybacks, rather than raising wages, hiring more workers, or investing in new equipment.U.S. companies now have higher profits, better balance sheets, and more control over their firms. That won’t change, nor their attitude toward it, no matter how the House votes on the President in 2019.

In addition, and critically important, other possible investment locations for capital have serious structural challenges that make U.S. stock markets appear the safest current harbor for stable growth. Despite the U.S. economy’s own weaknesses, by comparison with China’s nascent banking debt crisis, the EU’s structural stasis, or Japan’s exceptionally modest growth prospects, the U.S. remains the global investment location of choice. Appearing as the best place to invest money among the world’s largest economies confers tremendous benefits toU.S. firms, U.S. financial markets, and the U.S. government (helping to maintain the dollar as the reserve currency, because investors worldwide keep buying them in bulk).

In short, this mixture of consistent policy progress toward tax cuts and reduced regulatory burdens, coupled with theU.S.’s continued relative attractiveness to global investors at the expense of other major economies will provide ongoing support for U.S. financial markets. These factors will probably continue, irrespective of whether Donald Trump is impeached and hence this bull market and the benefitsU.S. companies have received from it will likely last.

Even if the unthinkable occurs and Donald Trump is driven from office, the context of the overall market will remain very much the same. President Pence would continue these policies, but without President Trump’s “threat to the Republic” elan. It would also force President Pence to negotiate economic policy with Speaker Nancy Pelosi, pitting the signer of Indiana’s Religious Freedom Restoration Act against the congressional representative of San Francisco.

U.S. financial markets would be unlikely to crash, because a Pence administration would provide two critical elements that both Wall Street and Main Street have been hungering for: continuity in policy and consistency in governance. Finance and business hunger for freedom and predictability, and Donald Trump only gave them one out of two. A Pence Administration, with all due respect to President Warren G. Harding, would provide a “return to normalcy,” a Republican government that would cut taxes and regulations, but would also return to the traditional Republican policies of the past, such as free trade, national security, and not attacking law enforcement institutions.

There may be a few potential pitfalls to cause a future stock market crash and even a U.S. recession. Trump’s trade wars may cause so much global economic disruption that it could bring down financial markets and the U.S. economy with it. American corporate debt could explode, as it has increased by $2.6 trillion from 2007 to 2017, to a total of $4.6 trillion. Finally, the Federal Reserve could continue to raise interest rates over the next two years, worrying more about rising inflation than a future hard landing for the U.S. economy, once the sugar high from the tax-cut runs out.

As much as Donald Trump believes — as did King Louis XIV — that he is the market, he is not. He has provided sustenance for some 500 days in a market run of nearly 3,500 days, but he is neither necessary nor sufficient to maintain the stock market by himself. There are forces larger than he expanding U.S. financial markets and while he has benefited from them, he cannot summon them from the vasty deep. If Speaker Pelosi comes calling, the stock market will be fine.