"American Dharma" review: Errol Morris’ Steve Bannon doc is the most disturbing movie of the year

As Morris challenges the alt-right icon to justify his ideas, this portrait makes it unclear who has the upper hand 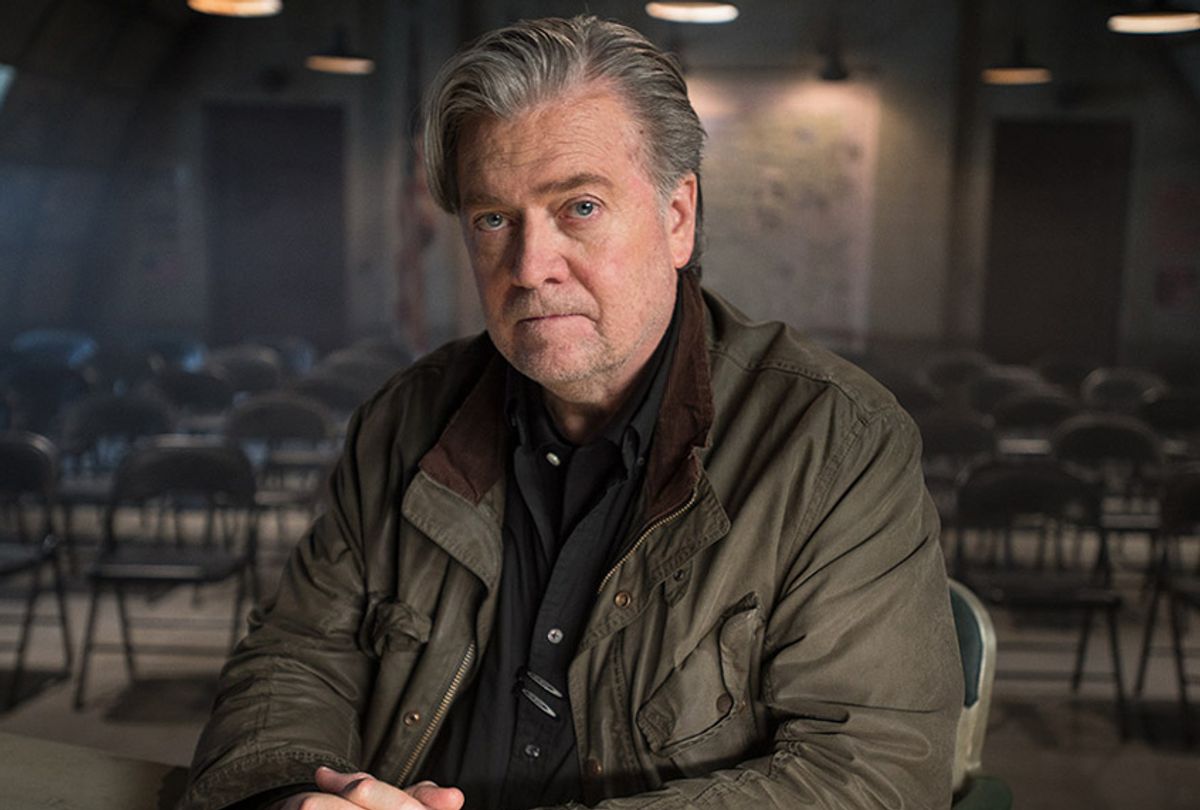 Errol Morris excels at interrogating morally complicated men, from Robert McNamara to Donald Rumsfeld, but he’s never ventured as far to the dark side as he does with “American Dharma.” Confronting Steve Bannon in a cold, empty room for the duration of this unsettling portrait, Morris presses the alt-right icon to justify the racist ideology behind the machinations that propelled Donald Trump to the White House.

Morris consolidates Bannon’s evolution from conservative media maverick to the architect of the Trump campaign into a slick overview. However, those details are less compelling than Morris’ tendencies to interrupt Bannon’s self-mythologizing in search of the truth. “American Dharma” delivers a suspenseful and upsetting showdown between one man confident of his cause and another mortified by it.

At certain points, “American Dharma” becomes a nightmarish variation on a TCM special, with Bannon narrating highlights from some of his favorite movies, drawing out the militant and nativist themes of “The Bridge Over the River Kwai” and “The Searchers” without giving them a name. His concept of “dharma” stems from these hyper-masculine portraits of men following their obligations at all costs, and they go a long way toward illustrating the ridiculous cinematic context in which Bannon views his career.

But the scariest thing about “American Dharma,” the quality that makes it the most disturbing movie of the year, stems from its continuing ambiguity: It’s never clear who has the upper hand. Bannon acolytes may not be persuaded to abandon their leader, even as he squirms under Morris’ baffled tone, and everyone else is left wondering if the bad guys have already won. Not since “Mr. Death,” his portrait of lifelong executioner and Holocaust denier Fred A. Leuchter, has Morris spent so much time with such an appalling character.

“American Dharma” might be the most personal project in Morris’ sprawling filmography. After abandoning his Interrotron —the patented interview technology that has his subjects stare directly at the camera — with last year’s mini-series “Wormwood,” Morris continues to inject himself into the frame. This time, he has good reason: As the pair sit across the table from each other, Bannon tells Morris that he was inspired to make right-wing propaganda movies after watching Morris’ McNamara portrait “The Fog of War” at the Telluride Film Festival. “It’s your fault,” Bannon says. That admission creates a fascinating context for the discussion: Morris created a monster, and now he’s desperate to understand him.

It doesn’t always go so well, but “American Dharma” soars whenever Morris gives it his best shot. While both men occasionally lose their tempers, the best moments come when the filmmaker backs Bannon into a philosophical corner. Morris positions Bannon’s working-class support against his advocacy against the cruder aspects of his party. The filmmaker talks of “good Bannon and bad Bannon,” which leads the disheveled provocateur to smirk — after all this is the guy who likes being compared to Lucifer — until he hears the rest of it.

Morris, whose high-pitch wail has become as familiar a cinematic sound as the Wilhelm scream, can’t figure out how a guy who claims he wants to help the lower classes could also support deporting Dreamers, building a wall, and destroying the environment. “That’s what makes me think you’re crazy,” Morris says. Bannon dodges the question.

He does that a lot. Shot at a low angle to accentuate his Falstaffian build, Bannon presents his convictions, diatribes, and triumphant anecdotes about the 2016 election with the same low-key confidence that he has brought to numerous interviews in the wake of his ouster from the Trump Administration. “You need some killers,” Bannon says. “That’s why Trump won.”

Speaking of Falstaff: Bannon’s a big fan. Waxing poetic on Orson Welles’ “Chimes at Midnight,” he recalls the scene where Shakespeare’s rapscallion (Welles, whose round, bearded face looks like a primal variation of Bannon’s own figure) feels betrayed by Henry IV, whom he helped propel to his regal position before the young king banished him. Bannon tries to analogize the scene to his own frayed relationship with Trump, but tries to spin it as a hopeful moment. When Morris reminds Bannon that Falstaff feels like he gave the king everything, Bannon’s face falls.

The movie dips and dives through these compelling moments, when Bannon’s aspirations for profound intellectual heights meet their match in a much sharper worldview. To that end, “American Dharma” is a tragic portrait of ideological corruption coming to terms with itself. But it’s also a well-crafted historical overview. Unfolding across several involving chapters with cheeky intertitles (#fog of war, Angry Voices, Go Fuck Yourself, etc.), the movie zips through Bannon’s military family, Catholic schooling, and experiences on liberal campuses where he fomented his worldview in private.

The movie evades Bannon’s strange ‘90s exposition into Hollywood producing, but it does sample from his own films. These include his Ronald Reagan love letter “In the Face of Evil,” which earned him a fan in Andrew Breitbart and set the stage for Bannon’s next career phase as the overseer of Breitbart’s fiery right-wing outlet. By his own admission, his 2010 documentary “Generation Zero” was envisioned as an “avant-garde film for right-wingers.” (Notably, he mispronounces “avant.”)

The pundit seems to think Morris would appreciate the notion, but appears troubled that he falls short of gaining Morris’ respect. He’s shocked to learn that the documentarian voted for Clinton, having assumed the director of “The Fog of War” and “The Unknown Known” would naturally adhere to a more militaristic worldview. Bannon relishes chaos as a blunt instrument of change. “People think I’m apocalyptic,” he says. “I think I’m a rationalist.” Morris shoots back: “Can’t you be an apocalyptic rationalist?”

Much of “American Dharma” lays out Bannon’s rise and fall in measured detail. The account of his ability to crack the Trump campaign by propelling a message to working-class struggles doesn’t exactly bring new information to the table, but it successfully positions the story as a simplistic case of exploitive campaign techniques. Far from some genius political tactician, Bannon utilized his media savvy like a marketing guru more keen on winning than fighting for some underlying cause.

Unfortunately, Bannon sometimes has the upper hand. Morris falls short of challenging Bannon on every corrupt detail of his recent career, especially when it comes to Trump’s inane defense of the Charlottesville riots. Bannon reiterates Trump’s blather about “both sides” being culpable for the violence as if it makes perfect sense, and whatever challenge to that sentiment might remain on the cutting room floor, its absence prevents the movie from allowing Bannon’s support for white supremacy to temporarily overtake the narrative.

Cinematically, “American Dharma” has the usual Morris touches that deepen the dramatic connotations of his subjects, and create the eerie feeling of hovering inside their heads. As Bannon walks through dilapidated neighborhoods in slo-mo, the cyclical music crescendoes, and “American Dharma” develops a searing, operatic tone complimented by the recurring image of a burning flag. Bannon predicts that a revolutionary war is coming, but “American Dharma” makes the case that he’s living as if it’s already begun. In the unnerving final shot, he walks down an empty tarmac, his figure growing smaller at the center of the frame. It’s unclear if he’s heading into oblivion, or another terrible chapter, but Morris is wise to leave his viewers to think it over.

Of course, that’s assuming viewers decide to give “American Dharma” a shot in the first place. Bannon has come to epitomize so much about the toxicity that has divided American society over the past few years that the prospects of spending 90-odd minutes with him in close quarters might not be an experience most people would want to accept. But ignorance of the populist lunacy that carried Bannon this far has worked out in his favor. As the country rejects him and he makes his way across Europe, “American Dharma” doesn’t just recap a dark chapter in the nation’s history. It sounds the alarm for the rest of the world.

Grade: B+
“American Dharma” premiered at the 2018 Venice Film Festival. It is currently seeking distribution.