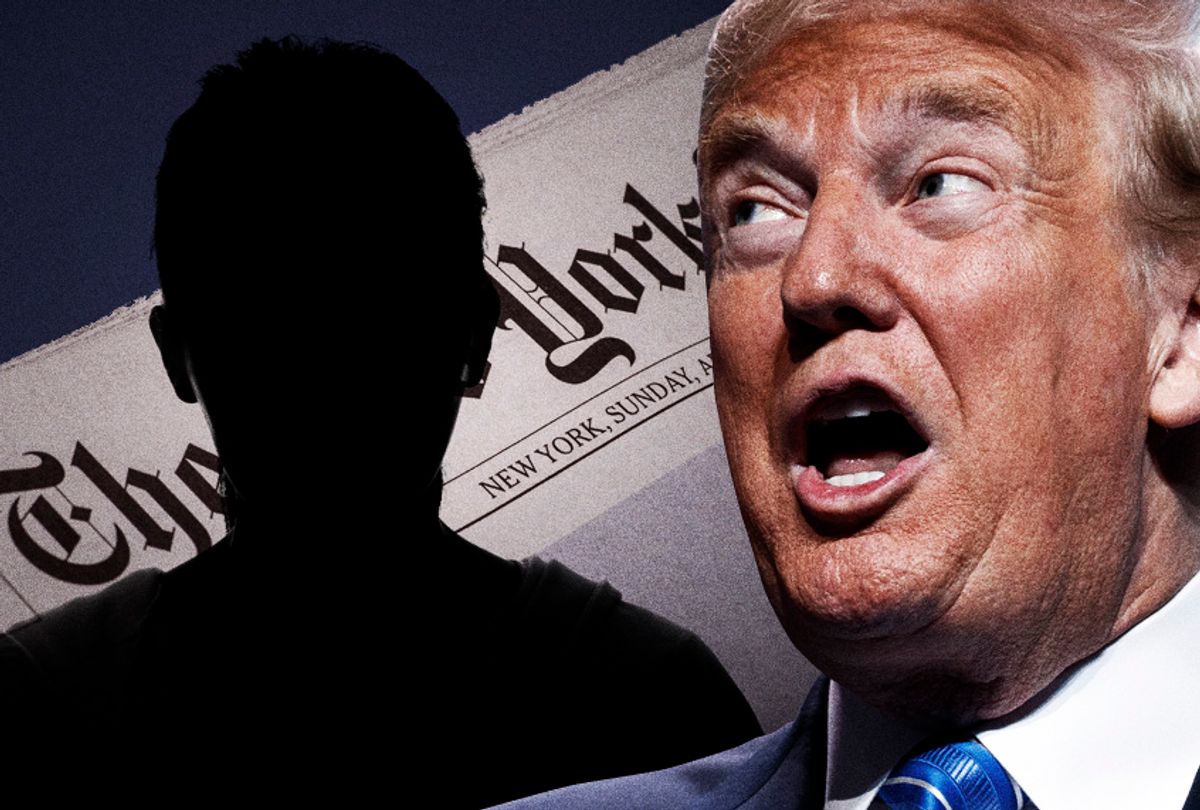 Vice President Mike Pence and senior officials in the Trump administration scrambled Thursday to deny that they had authored an anonymous, damning New York Times op-ed revealing that an internal "resistance" movement is growing inside Donald Trump's White House.

The editorial titled, "I Am Part of the Resistance Inside the Trump Administration," — which was published Wednesday by someone identified only as a "a senior official in the Trump administration" and claims that the president acts "in a manner that is detrimental to the health of our republic" — has launched a guessing game inside 1600 Pennsylvania Avenue and out about the author's identity.

In a statement Thursday, Pence's communications director Jarrod Agen slammed the anonymous writer as "gutless" — the word Trump used several times Wednesday to describe the unnamed official — but did not specifically deny that someone in Pence's office was the potential author. Agen added, "Our office is above such amateur acts."

Director of National Intelligence Dan Coats also denied writing the editorial Thursday, calling any speculation that he or his deputy were responsible as "patently false."

"From the beginning of our tenure, we have insisted that the entire IC remain focused on our mission to provide the President and policymakers with the best intelligence possible," he said, referring to the intelligence community, in a statement.

Secretary of State Mike Pompeo, who previously served as Trump's CIA director and is traveling abroad in India, also denied that he had penned the scathing op-ed about his boss. Criticizing The Times for publishing it to begin with, he also called it "sad."

"If it's accurate, they should not have chosen to take a disgruntled, deceptive bad actor's word for anything and put it in their newspaper. It's sad more than anything else," Pompeo said Thursday. He added, "I come from a place where, if you're not in a position to execute the commander's intent, you have a singular option — that is to leave."

"It's not mine," the secretary concluded.

A spokesperson for Kirstjen Nielsen also rejected the idea that the Homeland Security secretary, who reportedly came close to resigning earlier this year, had authored the piece.

"Secretary Nielsen is focused on leading the men and women of DHS and protecting the homeland — not writing anonymous and false opinion pieces for the New York Times. These types of political attacks are beneath the secretary and the department’s mission," the agency's press secretary Tyler Q. Houlton said in a statement.

Defense Secretary James Mattis also denied he was connected to the piece. "It was not his op-ed," chief Pentagon spokesperson Dana White said.

A spokesperson for Treasury Secretary Steve Mnuchin also rejected the notion that his boss had written the op-ed. "It is laughable to think this could come from the secretary," Tony Sayegh Jr., a spokesman for Mnuchin, tweeted.

"Neither Secretary Wilkie nor anyone else at VA wrote the op-ed," an agency spokesperson for Department of Veterans Affairs Robert Wilkie told CNN.

A department spokesperson for labor secretary Alex Acosta told NBC News, "The secretary does not play these sophomoric Washington games. He is definitively not the author."

Federal Communications Commission Chairman Ajit Pai, who was picked by Trump to head the independent agency in January 2017, also joined the growing list of denials along with Chairman of the Federal Trade Commission Joe Simons, POLITICO reported.

Shortly after the op-ed was published, the president asked whether the editorial amounted to "treason."

Trump demanded that The Times, "for National Security purposes, turn him/her over to government at once."

White House press secretary ripped into the author of the op-ed Thursday morning and urged people to "call the opinion desk of the failing NYT."

"The media's obsession with the identity of the anonymous coward is recklessly tarnishing the reputation of thousands of great Americans who proudly serve our country and work for President Trump. Stop," Sanders wrote in a statement. "If you want to know who this gutless loser is, call the opinion desk of the failing NYT at 212-556-1234, and ask them. They are the only ones complicit in this deceitful act. We stand united together and fully support President Donald J. Trump."