Under attack by corporate media, unions can't let others tell their story for them 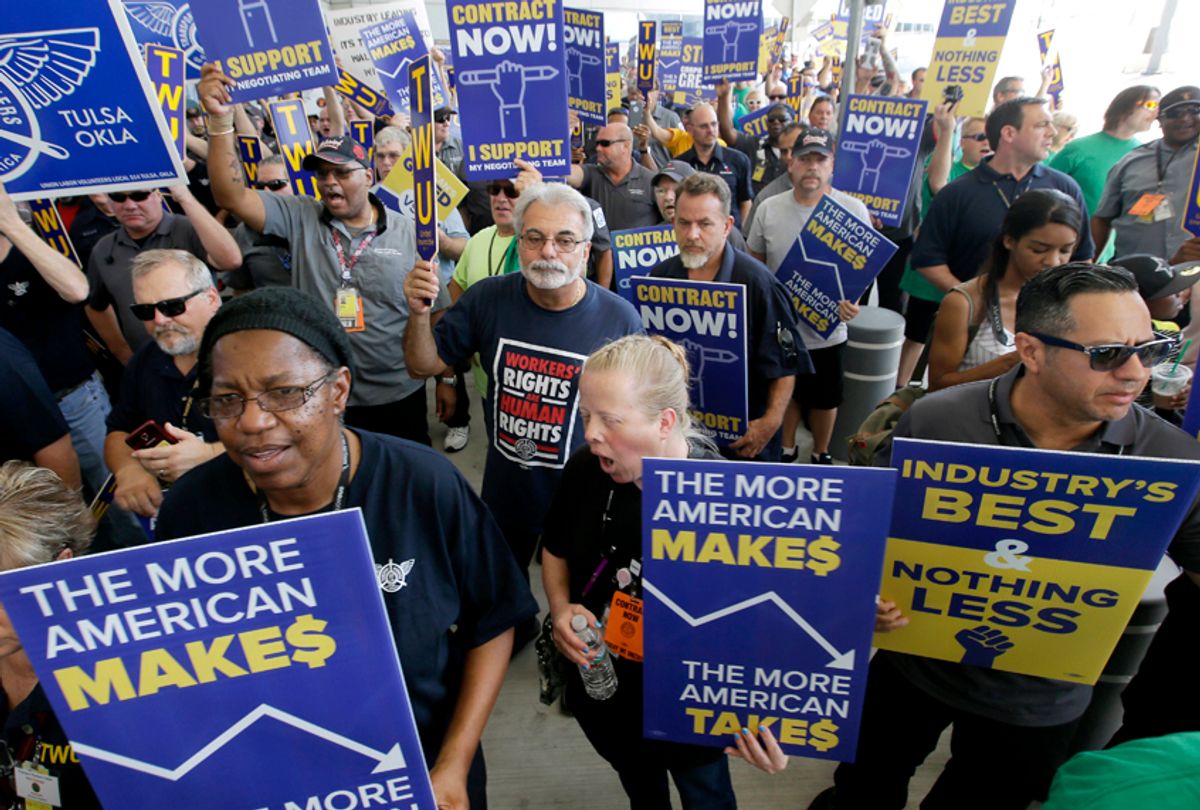 Protesters from a coalition of different unions participated in a picket against American Airlines and its ongoing contract negotiations with ground workers at Dallas/Fort Worth International Airport. (AP/LM Otero)
--

As the New York labor movement tries to find its footing in the wake of the U.S. Supreme Court’s Janus v. AFSCME decision, it faces a problem: All too often unions like the building trades are perceived as self-interested rackets that command outrageously high salaries and benefits which drive up the costs of something as vital as fixing the MTA’s subway.

So even though the union construction trades have been losing market share in New York City, they are cast as impediments to social progress because they are blamed for driving up the cost of public works, the last bastion where they exert any influence.

In December, a New York Times series on the MTA’s cost overruns went after the building trades hard and zeroed in on unions like Local 147, which represents the “sandhogs” who do the perilous work of digging tunnels underground.

The Times appeared to take exception to the notion that a member of Local 147 could make $111 an hour and even as much as $400 an hour if overtime was involved. Back in 2013, the Times developed a similar fixation with stagehands who were members of IATSE Local 1, marveling that they could make $400,000 a year working in venues like Radio City Music Hall and Carnegie Hall.

READ MORE: How to survive the coming recession

Of course, this is the same newspaper which will regale readers in its real estate, business and culture sections with the perspicacity and philanthropy of members of the billionaire class. The amassing of great fortunes like those attached to Michael Bloomberg or Bill Gates are considered badges of great honor that entitle the wearer to comment on all matter of local, national and international issues.

But the union sandhog or stagehand making a good living, that’s all highly suspect and demanding further investigation. Unions should not let themselves be put on the defensive about these kinds of wages, and in an age of social media can’t let unfair attacks go unanswered.

There’s no doubt that, on balance, the Times series did cast an essential spotlight on the nexus of structural debt, politics, campaign cash and cost overruns that have all hobbled the M.T.A.

“The spending has taken place even as the M.T.A. has cut back on core subway maintenance because … generations of politicians have diverted money from the transit authority and saddled it with debt,” the Times reported, adding that, for years, “public officials have stood by as a small group of politically connected labor unions, construction companies and consulting firms have amassed large profits.”

While the Times was offering thousands of words of nuanced reporting, at the very heart of midtown Manhattan a billboard appeared that was part of a sophisticated campaign launched by the Center for Union Facts that blames the subway conditions entirely on the Building and Construction Trades Council of Greater New York and its president, Gary LaBarbera.

The ad campaign told straphangers to blame the unions for New York City subways that were “dirty, delayed and dangerous.”

The Center for Union Facts is just one of a group of corporate-friendly nonprofits that are run by Rick Berman, a master of impactful astroturf issue campaigns that leave no fingerprints because the donors who are paying for them remain unknown.

He was the subject of a Rachel Maddow segment in 2009 that traced multiple Berman campaigns and websites done for industry like FishScam.com, which argued that mercury in fish isn’t bad for consumers, and SunLightScam.com, which made the health case for tanning beds.

In response to the latest effort — an anti-union campaign called Subway Scam — LaBarbera’s Building and Construction Trades Council blasted the Center for Union Facts as “a front group for anti-union forces committed to undermining working people across New York City and the nation. . . . This pseudo campaign is replete with lies, half-truths, and a repulsive anti-union, anti-worker agenda. The cowards funding this effort should stop hiding and let New Yorkers know who they are.”

But once something like “dirty, delayed and dangerous” is in the bloodstream, it can take on a life of its own no matter its origins.

So in the April 3 edition of “Marketplace,” the nationally distributed public radio business program, Berman’s “dirty, delayed and dangerous” ad campaign made a cameo appearance to set up a feature that laid the blame for the MTA’s eye-popping construction costs on the unions entirely.

And in a bit of a pile-on, the “Marketplace” reporter had an unsuspecting female electrician apprentice read the “dirty, delayed and dangerous” billboard slogan aimed at the unions into his microphone and then he asked her if it was true. “Yes,” she responded. She also mentioned that she hoped to join the union one day.

The sketchy origins of that billboard never made it on the air. And there was not any representative of the trade union movement in the “Marketplace” story.

In an extended Twitter exchange, the “Marketplace” reporter told me he had reached out to the Building and Construction Trades Council for its side of the story and never heard back.

I checked in and confirmed with the public relations firm that represents the Building and Construction Trades Council of Greater New York that the “Marketplace” reporter had reached out, but the union group chose not to engage him.

That was a mistake.

This article originally appeared in cityandstateny.com