“I was never cool. I’ve always kind of been a 54-year-old guy in a button-down shirt,” "Late Night" host admits 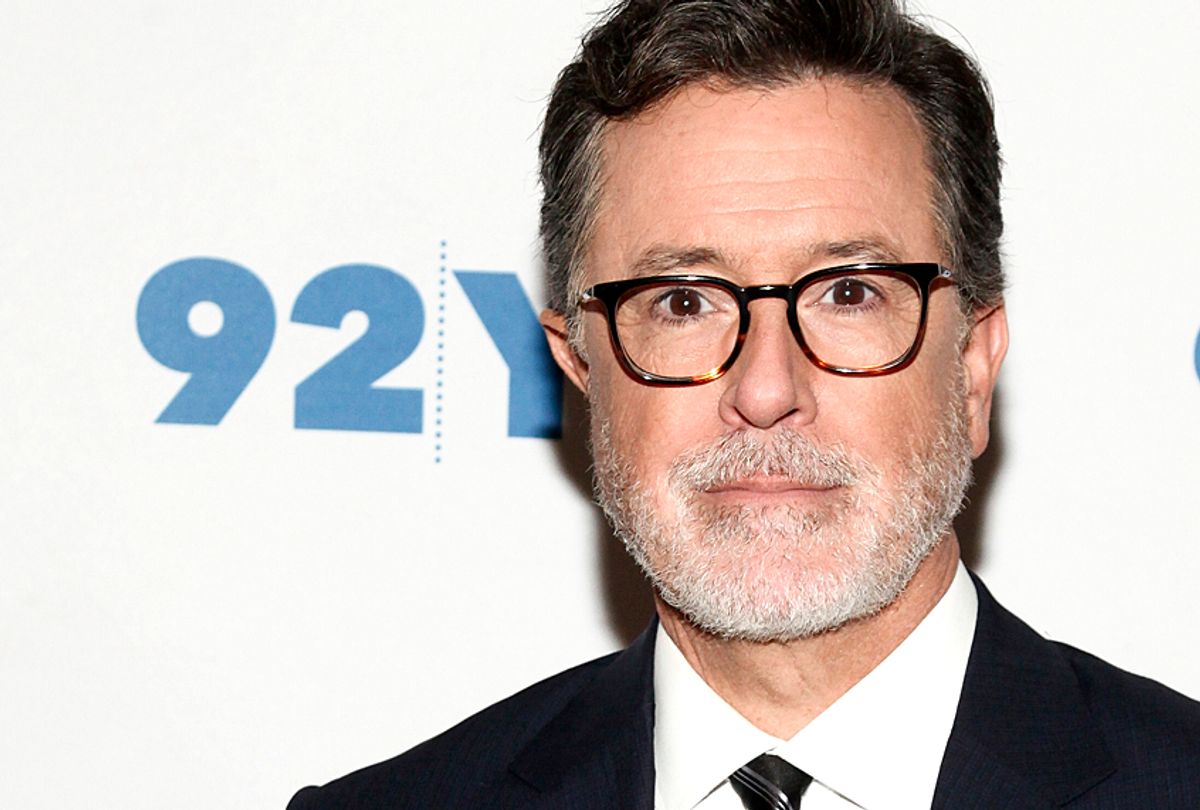 Stephen Colbert’s Rolling Stone cover-story interview covered a lot of ground, from his battle with anxiety to why Donald Trump is a “heretic against reality.” But there was even more to the conversation.

I still will pull out things that Dana said about that show. On the show now, sometimes I’ll say, “Right down the pipe,” as Dana. He’s like, “Do the show right down the pipe. Look right down the pipe of the lens.”  I had been a sketch performer and an actor, and onstage, there’s no pipe, there’s the whole room. And he doesn’t mean just address the camera, he means, “Remember, it’s going down that pipe. Be aware of that.” And he goes, “And also don’t be afraid to turn and address the pipe.” I was uncomfortable being on camera and looking straight into the lens, because it’s antithetical to a theatrical experience. And he also said, “Funny with the sound off.” He said, “Make the people at the gym take the mute off while they’re watching it the next day.”

Dana himself has told the story that after the premiere of "The Dana Carvey Show" – with the whole Clinton breastfeeding puppies and whatnot — that the next day he came into our office and said, “I’m sorry I’ve ruined your careers. You guys should have worked at "SNL" and now you never will. And I’ll do my best to try and find you guys work.” We were mystified. We’re like, “What’re you talking about? The show’s great!” And I was too young to see what was coming. I was too inexperienced in TV to see what was coming. I mean ,I had done [the Comedy Central sketch-comedy show] "Exit 57"  for a couple seasons, but this seemed like such a more productive and healthy and professional environment than that had been. Because we truly were inmates running the asylum. We had no idea what we were doing. We would never go to bed at night; we’d stay up all night writing and things like that. So that was a bit of a chaotic experience.

So what did I learn from "The Dana Carvey Show"? Probably more than I can easily catalogue right now, and also I made some fantastic comedic friends and got to experience truly brilliant writers working at a very high speed, working on some very strange, beautiful, conceptual comedy. I mean it was: Spike Feresten, Steve O’Donnell, Bob Odenkirk, David Cross, Robert Carlock, Steve Carrell, Louis C.K., Smigel, Dana, Charlie Kaufman, Dino Stamatopoulos. This was an insane, insane group of writers. As much as anything else, I also learned I could hang with people that good, at that level, and I had something to offer them. I belonged. Being with that group of people said to me that there would be a place for me in the thing that I wanted to do. Because I hung with those people and I got shit on the air.

On Bill Cosby and Woody Allen

Someone argued that if you grew up watching Woody Allen, and got some attitudes and ideas from his movies, that maybe were you drinking from a poisoned chalice. I don’t think Woody was a major influence for you. . .
For me, that’s Cosby. Because Woody Allen is a brilliant filmmaker and comic mind, but he wasn’t my guy. But Cosby was that for me. I can’t listen to it anymore. I had everything memorized.

And it seemed like you convinced Jerry Seinfeld, on-air, not to listen to him anymore either.
Yeah, well, I didn’t convince him. During the commercial break, he goes, “I think I’m wrong.” And he says, “Do you mind? I’d like to say that I think i’m wrong.” That’s why he came out and said that after the break. No pressure for me, it was just him.

But were you drinking from a poison cup? In other words, do you carry that poison in you? That’s the true danger of a poison cup. It’s not that you’re poisoned, which is a tragedy in-and-of-itself, I suppose, but that you’re gonna pass that poison on. I suppose that exists. But for me, that’s Cosby, and there’s very little in Cosby’s work — which is why it’s so shocking — that reflects the reality of his crime. And so, I don’t think listening to Cosby passes that poison on. I don’t know what comedian overtly pours poison these days, like in my lifetime.

With "The Colbert Report," there was this sense that you had some conservative viewers, that your joke went both ways, and even at the beginning of "The Late Show," that seemed to be the case as well. Can you imagine you have pro-Trump viewers in your current audience?
It’s possible that they’re watching. I mean, they complain about it sometimes, so somebody’s watching something. If I got a significant number of pro-Trump viewers to watch the show, that would be bad news for the president. Because he demands perfect loyalty. I don’t actually get those kind of breakdowns. I suspect it’s probably a small percentage.

On hosting a late-night show at age 54

I’m a little old for this job.

Isn’t that only by current standards, though?
I don’t think so. I mean, how old was Johnny [Carson] when he got his job? He was in his thirties. I was a little old for "The Colbert Report" because I was 41. Jon [Stewart] was in his mid-thirties when he started at "The Daily Show," because he’s only 18 months older than I am. Fallon’s 10 years younger than I am, Kimmel is a few years younger than I am, but he’s been on for 15 years, honest to God. He seems like he’s a new guy, but he’s not. So to get tapped to host one of these network things, I was 51. No one’s even close to that. I’m, like, 15 years older than anybody else who’s ever had one of these gigs.

So how does it affect the way you look at things? Because it’s not like you ever tried to be super-hip, anyway.
I’ve never been good at it, even in my youth. I was never cool. I’ve always kind of been a 54-year-old guy in a button-down shirt. Because it’s just where I grew up and what my family was like. So that’s freeing. There’s no way I can be that.

Does the job require a certain engagement with pop culture that would be unnatural for an average 54-year-old?
Sure. When you have kids, though, you end up getting a fairly broad range of music, for instance. But yeah, there are cultural references that have to be explained to me. And I try really hard not to pretend on stage. If I don’t understand what the guest does for a living, I’ll go, “So why is it that you record yourself all the time?” [laughs]. Like I had on a lovely guest the other night, and I said, so you revealed that you’re pregnant on your show, but your show is not a confessional show; it’s actually a presentational show with sketches and characters and everything like that. I said, in my generation you would come on my show to reveal something private about yourself, so why are you on my show? I think I actually said that: “Why are you here? ” I don’t understand, like, you’ve decided your show is every aspect of your life, why go anywhere else? So that’s a moment of confession.

On Trump, the “Overton window,” and the (alleged) pee tape

So the window of discourse is the range of tolerated public discourse. I think he lives outside of it. I’m new to this concept but he lives outside of it, and I would say him saying, [in Trump’s voice] “I see no reason why Putin would support me,” is a very interesting statement because, in order to answer that statement in a way that seems logical, everyone in the discussion has to step outside of the window. Everyone has to come out into the ledge with him. Everyone has to go into the idea,  “Oh, you’re an asset of the Russian regime,” because he’s almost daring you. [Imitates Trump’s voice again] “What reason could there be? Go ahead, I dare you, middle of the road, gray-suit eminence of the — I dare you to say the only answer.”

There was an incredible moment when a reporter stood up in Helsinki and asked if Putin had any compromising information on Trump. And neither of them said, “That’s insane, I’m offended you’d even ask that!”
No, Putin very specifically said, in so many words, that he wasn’t important enough for us to get kompromat on. Not that A) we don’t do kompramat, or B) if we had it, we wouldn’t be running him. And he also didn’t say we didn’t do it. He just said he’s not important.

Do you remember your first reaction to the news that there could be a pee tape?
Um, it made a lot of sense. Because, true or not, it certainly answers the question that no one has been able to answer. That’s the problem that Mr. Trump has regarding Russia. It’s not necessarily his behavior, it’s that no one can answer the question as to why, and that was always so troubling in his conference with Putin. No one can answer the question: “Why?” And the tape, the Ritz-Carlton pee-pee tape, answers the question. They’re so dumb not to fill in that answer. If they just filled in that answer with something else, or did one thing that Putin wouldn’t like — just one. Say one nasty thing about Putin.

Some people said like, “Oh well, it’s just like, he’s a deal maker and there’s nothing nefarious about it” — that doesn’t answer why he never says anything negative about Putin. Because his fall back is aggressive, name calling – he never does that with Putin. So until they come up with a better answer, and nobody has, it still makes sense to me. True or not.  Whether I believe it is immaterial. It makes sense and no one can come up with an answer that makes more sense. Nothing about his story makes sense. Other than this.