Hunger is a grave warning to the world: If it is not defeated, the consequences will be dire

Hunger, that constant sound inside the head of the poor, must be silenced to ensure our species has a future 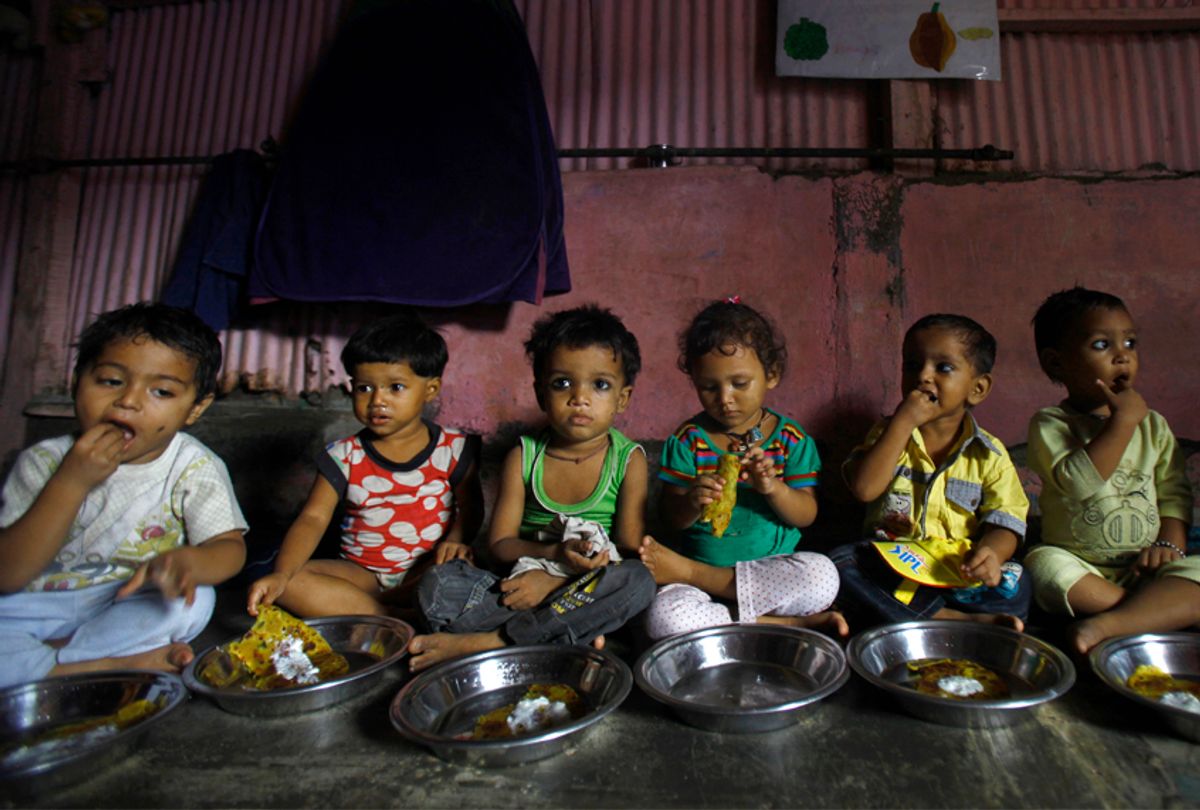 It was a very hot day at the outskirts of Ahmedabad, India, where I met with a group of men and women at a local bus stand. They were itinerant laborers, people who move from one part of India to another in search of work. The city of Ahmedabad in Gujarat has a population of about six million people; among them are about 1.5 million migrants. Official figures from the Indian government suggest that there are 139 million internal migrants in India. This is likely a low figure.

Rural distress brings these men and women to the city, where work in construction and light manufacturing as well as domestic service is their lifeline. Many of the migrants struggle to find work each day. One of them, a man from Bihar, tells me that the situation for him and his friends is dire. “Hunger,” he says, “is a constant sound inside [our] head.”

It’s impossible to ignore the growth of economic inequality in each corner of the planet. Vulgarity is the order of the day, with the very rich hoarding vast amounts of wealth while the poor scratch the earth for their livelihood. The British-based charity group Oxfam has done an important service by offering an annual indication of the gravity of inequality. This year, Oxfam noted that a mere 42 rich people have as much wealth as 3.7 billion poor people. What is most astounding is that in 2017, 82 percent of the social wealth produced by the world’s people was vacuumed into the bank accounts of the wealthiest 1 percent among us. This is not an ancient problem, in other words, but a current problem posed by the structure of capitalism: Goods and services are produced socially, but profit is sequestered privately — and with fewer and fewer hands able to seize this profit.

What is less digested is that increased inequality compounds not only poverty — which is obvious — but hunger. It is true that war and climate change are major factors that leave people without access to food. Starvation follows aerial bombardment and rising tides. But it is even more important to focus on the much wider problem of inequality and poverty that make hunger a normal part of life — the constant sound in the heads of the impoverished.

Data on poverty should make any sensitive person pause. The United Nations and the World Bank keep track of poverty figures. There is always some disagreement about the methodology followed by the analysts. But there is near consensus that half of the world’s people — in excess of three billion people — live on less than $2.50 a day, the benchmark for poverty. Of these people, at least 1.3 billion live on less than $1.25 a day, the standard of extreme poverty. Hunger in this part of the planet is a normal part of life. As food costs rise, notes the World Bank, hunger increases. The rise of food prices in 2010 itself pushed 44 million people into poverty. UNICEF calculates that each day 22,000 children die due to poverty — most of them from malnutrition and starvation.

Poverty in the farms

The majority of the poor live in rural areas or else migrate from rural areas to join the vast numbers of people who come into cities in search of a livelihood. Work and wages in rural areas have declined quite sharply. Blame for this rests on the domination by monopoly firms over agriculture — from seeds to supermarket shelves. Three monopoly firms — DuPont, Monsanto and Syngenta — control the global seed market, while an additional three monopoly firms — ADM, Bunge and Cargill — control the grain trade. Most of the processed food trade is controlled by a handful of monopoly firms, with only 10 firms owning every single major food brand — Associated British Foods, Coca-Cola, Danone, General Mills, Kellogg’s, Mars, Mondelez, Nestlé, PepsiCo and Unilever. These corporations, which make fabulous profits, suffocate those who work the land. These firms have forced down the prices paid to farmers and agricultural workers as well as increased the costs of processed foods. If you live in the countryside and work on the fields, neither are you getting paid enough nor are you able to afford to eat. No wonder that 300,000 Indian farmers have committed suicide over the past 15 years and that millions of farmers are on the move in search of any work at all.

The United Nations has made a pledge to end hunger by 2030 — Zero Hunger. This is an important standard. A decade remains before this task must be accomplished. But all signs point in the opposite direction. There is simply no political will to constrain the power of the agribusiness sector, nor to provide a just economic foundation for farmers to survive as capitalism transforms the countryside into dystopia. The phrase “Zero Hunger” mirrors “Fome Zero” (Zero Hunger), a key policy of the Brazilian government led by Lula. It was under Lula and his Workers’ Party (PT) that Brazil almost entirely abolished hunger. The policies that Lula drove to do so are what earned him the blinding hatred of the oligarchy and its Western allies. The ruling bloc that conducted the “judiciary coup” against the PT now presides over an increase in hunger. Sugary rhetoric at the UN to end hunger means nothing if little is done against the agribusiness sector and if the political war against the left (in this case, Lula) continues without challenge.

Two roads lie ahead before humanity.

The first road leads to annihilation, with more and more people drifting into the arms of hunger, more and more people attempting to migrate to places where they believe they can survive. Rapacious growth of the power of agribusiness, lack of state initiative to provide an alternative foundation for farmers and agricultural workers, inflation of food prices — all this will lead to more farmer suicides, more migration, more desolation. It could also lead to the food riot, the uprising of the hungry that erupts when prices of food rise. Examples of such uprisings are legion, from the bread riots of Egypt to the fuel riots of Haiti. These riots do not necessarily open the door to an alternative history. They are, as often as not, the last gasp of a desperate people before history closes in around them.

The second road leads to a new history. This week in New Delhi, two major marches — organized by the left — took place. The first (on Sept. 4) brought women to the city. They demanded jobs and dignity, an end to violence against women and an end to hunger. The second (on Sept. 5) brought industrial and agricultural workers as well as farmers to the city — many of those in the crowd having been to the previous day's march as well. They demanded much the same thing, with an emphasis on pushing the state to manage prices and to produce a new basis for Indian agriculture. The agricultural workers and farmers ask a simple question: Shouldn’t the state provide land, credit and fair prices to protect those who work the land from the irrational destruction of agriculture by monopoly firms?

What will end hunger? Not an empty pledge by the United Nations nor the expansion further of monopoly firms into the countryside. Onus is on the people’s movements, whose slowly growing political power must change the terms of the conversation about starvation. Fixation on efficiency and markets — the code words that mask the power of monopoly firms — rather than on an economic policy that understands the rhythms of agriculture will create profits for the large firms, but not food for people.

Hunger, that constant sound inside the head of the poor, has to be silenced. Human beings who can come to terms with the prevalence of hunger have lost their humanity.