What if John McCain had picked Joe Lieberman in 2008?

"I think we would have done better than the McCain-Palin ticket did," Lieberman speculated to Salon 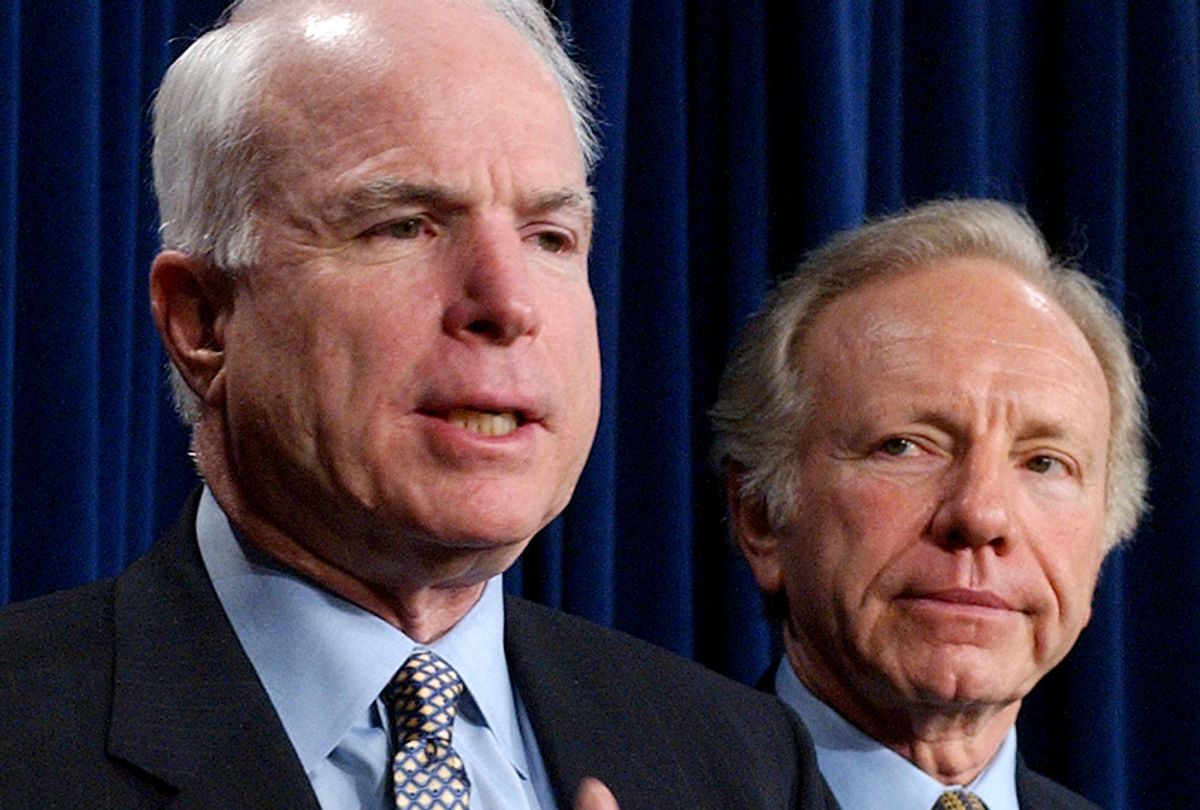 When John McCain ran for president in 2008, the Arizona senator almost picked an independent Democrat to be his vice presidential running mate — Sen. Joe Lieberman of Connecticut.

It's easy to lose sight of this fact, and the sheer magnitude of its implications, because there were so many other things that were impressive and memorable about McCain's storied life and career. It is interesting to contemplate how history would have been different if McCain had chosen Lieberman, a point that I make for three reasons:

1. A McCain-Lieberman ticket in 2008 would have echoed the ticket of President Abraham Lincoln and Sen. Andrew Johnson of Tennessee during the 1864 presidential election. On that occasion as well, a Republican chose a Democrat to be his running mate in the name of national unity . . . albeit at a time when the stakes were much, much higher (America was still in the middle of the Civil War when Lincoln made his bold pick).

2. A McCain-Lieberman ticket in 2008 would have had echoes of a national ticket that almost came to pass thirty-six years earlier. During the 1972 presidential election, Democratic presidential candidate George McGovern, a senator from South Dakota, almost picked Sen. Abraham Ribicoff of Connecticut as his running mate (the offer was tendered but Ribicoff turned it down). Although both men were Democrats, the parallels between the hypothetical McGovern-Ribicoff and McCain-Lieberman tickets are intriguing: Both involved a war hero presidential candidate nearly making history by choosing America's first Jewish vice president (on both occasions a senator from Connecticut), only to ultimately go down to defeat by choosing a controversial alternative. McGovern chose Sen. Tom Eagleton of Missouri, whose failure to disclose a past history of mental illness devastated McGovern's campaign, while McCain's selection of Palin earned him criticism after the Alaska governor's inexperience and penchant for gaffes became a political liability.

3. Even if a McCain-Lieberman ticket had lost in 2008, it would have set the precedent in American politics that meaningful bipartisanship was possible — not just empty gestures, but genuine attempts by the top leaders in both parties to work together on important issues.

While a McCain-Lieberman ticket would have been historic even if it had lost, could it actually have won?

"I think that it would have been very hard for any Republican running that year," Lieberman told Salon. "I once heard Bill Clinton in 2009 do an analysis for a small private group of the 2008 election and he said that the election day in 2008 was not on the first Tuesday after the first Monday of November. It was actually on Sept. 15. Of course he paused for exact the right amount of time and said that was the day when Lehman Brothers collapsed. And after that day no Republican had a chance to be elected president. It may be that he's right."

Lieberman also marveled at the Arizona senator's chutzpah in contemplating choosing Lieberman at all.

"I was kind of amazed that John McCain was even thinking about this, but it would have sent a very powerful message if John and I had run together, which was exactly what he had in mind," Lieberman mused. "It was not just that we were good friends — he trusted me, we'd vote alike on particularly foreign policy and some domestic issues, although we had a lot of policy disagreements — but it was the nature of our relationship that we worked past them or over them or we just acknowledged and respected the differences. I think it would have sent a statement when partisanship really was growing and becoming debilitating in Washington that there was a better way."

And as for whether the historic gambit would have yielded electoral dividends?

Lieberman also mulled over the historic parallels — with the Lincoln-Johnson ticket in 1864 and the nearly-was McGovern-Ribicoff ticket in 1972 — when they were brought up to him by Salon.

"The Lincoln parallel is an extraordinary one," Lieberman reflected. "It was long ago and John McCain never talked to me about that, but as you know he was a great student of history, so he was aware of it. I think he was thinking probably more in the context of what was happening in 2008."

The analogy also made Lieberman think of the unique conditions that prompted McCain to consider choosing him. To explain this he described how, even prior to the economic collapse in September 2008, McCain faced an uphill battle both because President George W. Bush and the Republican Party were incredibly unpopular and the Democratic nominee, Sen. Barack Obama of Illinois, had electrified voters as an "agent of change."

"I think to some extent John felt that he had to prove that he would be a change too, so obviously having a bipartisan ticket — which was consistent for him, with his whole career, it wasn't just an artificial leaping to do something that might help him win — appealed to him," Lieberman commented. "And of course there are some parallels in that thinking to Lincoln and Johnson, right?"

He added, "I don't know how much McGovern wanted to show that he was a change candidate by choosing, for the first time, a Jewish person to run for a national office in the US. Although it says a lot about him, McGovern, that he didn't hesitate for that reason. And I think part of what was going on, my feeling at that point was that he had tremendous respect for Abe Ribicoff, McGovern did. And I think McGovern was more liberal and was being painted by President Nixon and Republicans as way out liberal, and Abe Ribicoff was a very moderate, center-left if you will, Democrat, and had a style that was very reassuring and not at all sort of radical."

At the same time, Lieberman seemed to understand why Ribicoff had reservations about whether America was ready to elect a Jewish vice president.

"This is a difference, and it's a difference to celebrate: I think that when he was offered it — and as far as I know it was genuinely offered, they really pursued him — he said no, maybe in part because he thought, it was already pretty clear that McGovern was going to have a very hard time to win that election, but I think he also worried whether the country was ready for a Jewish person on a national ticket. My guess is that they were ready for a Jewish president like Abe Ribicoff," Lieberman reflected. "But that all changed by 2008, and ironically history twists, you have to thank Al Gore for that because he gave me the chance to be the first Jewish person on a national ticket, and there was really no anti-Semitism, certainly not verbal."

Lieberman added, "After all we did get 544,000 more votes than the other ticket, so not wanting to relitigate, but that's an indicator of the openness of the American people."

The former Connecticut senator also expressed satisfaction with the fact that, even though McCain was dissuaded by powerful Republican leaders from choosing Lieberman as his running mate, prejudice against Jews played absolutely no role in their thinking.

"The opposition within the Republican Party to choosing me had nothing to do with my religion," Lieberman recalled. "It had to do particularly with my stance on social issues like abortion and gay rights."

As we recall this great "What if?" of history, the 2000 presidential election should not be forgotten. After all, if McCain had chosen Lieberman as his running mate in 2008, it could have potentially vindicated the fact that Lieberman had won the most votes to be vice president eight years earlier but was denied the office after a controversial legal battle. Or, conversely, it could have earned Lieberman the distinction of being the first vice presidential candidate to lose on the ticket of both major parties.

There are many writers who dislike historical counterfactuals, but I am not one of them. By analyzing how the course of American history might have been altered through the actions of a single man, it reminds us of the degree to which a single individual can make a monumental difference if he or she simply makes the correct bold choice at the right time. With the possibility of a McCain-Lieberman ticket specifically, it also reminds us that it wasn't so long ago — merely a decade, in fact — that a Republican presidential candidate was trying to bring Americans from both parties together rather than capitalizing on their divisions.

This is a tribute to the legacies of both McCain and Lieberman, as well as to the way that the fabric of history can be woven or unraveled by individual initiatives.