Brigaid is in the business of transforming school food 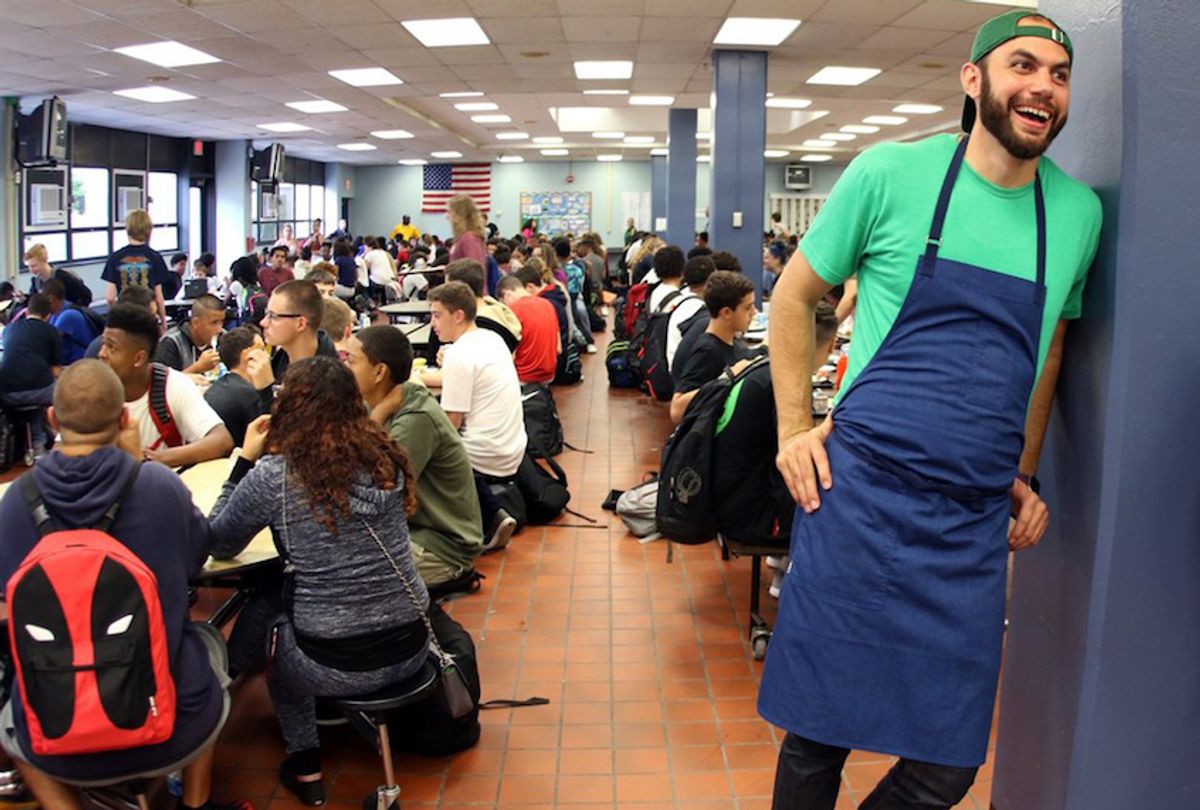 In New London, Connecticut’s public elementary schools, the lunch menu sometimes includes a hummus plate many foodies would fawn over: It comes complete with sundried tomatoes, feta cheese, fresh cucumbers, za’atar, paprika vinaigrette, and homemade whole-grain bread. But the first time chef Ryan Kennedy served the dish, only one tiny hand went up to place an order. So he spent the lunch hour in the cafeteria selling it to the kids, showing them how much fun ripping the bread and eating with their hands could be.

Now, says Kennedy, “They ask, ‘When are we going to have hummus again?’”

Chefs like Kennedy — who has worked in restaurants for 20 years and was previously the head chef for a popular local market and catering company — don’t usually have to convince diners to sample their food. But Kennedy now works for Brigaid, a startup that brings high-quality food to public schools, and, at the end of the day, his job is to make hungry kids happy.

Brigaid has gotten a lot of attention since its launch in 2016, primarily because it was founded by Dan Giusti, who ran the kitchen at Noma, a Copenhagen restaurant people travel from all around the world to experience. It’s also one of just a few for-profit companies — like Revolution Foods and Gourmet Gorilla — in a space filled with nonprofits, and Giusti is pioneering a business model that is vastly different from the others. “So many people think this is a charity. We’re a for-profit company and this is the hardest and most engaging job I’ve ever had,” he said.

While getting the numbers to work is a massive challenge Brigaid is facing as it attempts to make real, delicious food available within budgets available to public schools in low-income neighborhoods, Giusti sees a bigger hurdle in getting other chefs to reimagine to career paths that don’t start and end with fine dining.

“I thought [the biggest challenge] would be to get kids to change their perspective, but it’s to get chefs to think differently about their careers and what they do,” he said. “You’re not cooking for you. If the kids aren’t happy, nothing else matters.”

“Working at Noma gave me the confidence to say, ‘I know what I want to do and I’m going to do it,’” he said. “It was about cooking for a lot of people and cooking for them every day as opposed to once in a while, because you can affect the way they live their lives in a real way.”

Giusti explored the idea of launching a fast-casual restaurant and then shifted his thinking to institutions. When he started to think about education, the idea of putting a chef in a school kitchen full-time stood out. “Regardless of anything else, that just made sense, and it still makes sense,” he said. When he declared his intentions in a Washington Post article in 2015, administrators from schools all over the country started to reach out to him.

One of those people was the school superintendent in New London, Connecticut, a small town of about 27,000 people where more than a quarter of the population lives below the poverty line. The district qualifies for a USDA program that pays for free breakfast and lunch for all students, and Giusti immediately felt like the administration there “understood what it would take” to get the program up and running. After ironing out the details, Brigaid’s chefs were cooking for New London’s students by the start of the 2016 school year. This fall, the company will launch its second project at six schools in the Bronx in New York City.

Currently, the program works on what Giusti calls a “consultancy model.” Brigaid partners with a school district and recruits and trains chefs, who then become full-time employees of the schools. Those chefs then run the school kitchens as they would a restaurant kitchen, creating menus, ordering ingredients, and training and managing staff members (who are all kept on) to cook meals from scratch. And Brigaid provides ongoing oversight and support for all the chefs in the network.

Ryan Kennedy says a typical day starts around 5:30 a.m. so that breakfast can be served by 7:00 a.m. After breakfast cleanup, the staff immediately start chopping and prepping for lunch, which involves serving 800 meals in 90 minutes. The early morning grind is foreign to most chefs, but many of the other elements of running the kitchen and taking care of diners are familiar. “While lunch service is happening, you’re walking out, checking in with students, asking if they like it,” Kennedy says. “You’re out there, and you’re trying to make things nice.”

For the last few decades, most public schools haven’t had the facilities or the staff to cook meals from scratch. New London’s schools happened to have kitchens that could handle scratch cooking, and the six schools in the Bronx were specifically selected because of their kitchen facilities. Chefs also have to teach existing staff that have been doing things differently — sometimes for decades — new skills, like handling and cutting raw chicken instead of unwrapping and warming up chicken patties.

Then, there’s the budget. Schools that participate pay the chef and pay Brigaid a consulting fee. Some of those funds come out of the reimbursement the schools receive from the federal government’s school lunch program, since the students all qualify for free lunch. This past year, for example, the reimbursement amount was $3.31 per student. Of that $3.31, Brigaid allotted $1.25 for food costs. The remaining $2.06 per student is used for the remaining costs like labor, equipment, and maintenance.

And while the cost of labor increases using this model, Giusti says the chefs save the schools money by purchasing raw ingredients, which are often significantly cheaper than the processed and prepared foods many schools rely on. According to Kennedy, for example, when he makes whole-grain pizza from scratch he can get the cost per slice down to $.05, as opposed to $.28 per slice if he bought it packaged. A processed chicken patty costs the school $.66, while a scratch chicken thigh (which the chefs roast) costs $.56.

Brigaid is also experimenting with ways to help schools raise additional revenue for the programs by hosting occasional fundraisers and by utilizing school kitchens during off hours. In New London, for example, the chefs host a community dinner on Wednesday nights. Since the chefs are on salary and the space is free, they are able to charge just $5 per person, and 200 to 400 people regularly attend. It’s a longer day for the chefs, but it’s also a community-building experience they look forward to.

Read more Civil Eats: Once on the Sidelines of Farming, Women Landowners Find Their Voices

Chef Bill Telepan, who has been doing similar work with the non-profit Wellness in the Schools (WITS) in New York, New Jersey, Florida, and California for more than a decade, said even schools in low-income communities are able to find funds to implement better-food programs more often than one might think.

Telepan is also a strong believer in the power of having a chef physically present at the school to interact with the students. WITS’s program places trained chefs in school kitchens for three years to train existing staff on healthy scratch cooking, with the chef working full-time the first year and then slowly transitioning to fewer hours.

The program charges wealthier schools a significant fee for its services (about $100,000 for three years). In districts with fewer resources, it has generally worked with schools to move money around and look for grants and other sources of private and public funding. This year, its programs will be in over 150 schools nationwide. “There’s money out there; we know there are ways,” he says.

In addition to finding the funds to run these programs, hiring the right chefs can also pose a challenge.

“The hardest thing is not so much training chefs to think differently about food; the cooking is the same,” Giusti says. “It’s training them to drop their egos and not feel the need to prove themselves to other people. We’re getting a lot of young people out of culinary school and [on] bad days they’re thinking, ‘Should I be working at Eleven Madison Park, or should I be doing this?’”

Giusti said he’s working on getting better at recruiting the right candidates and communicating that cooking healthy, delicious food at a low price within restrictive nutrition guidelines is a challenging job that requires culinary talent and creativity. “To consider it a real, legitimate career—it’s a real culture change as a chef,” he adds. Instead of sourcing the most exotic ingredient, for example, a chef might be figuring out how to make a smart substitute—swapping vinegar (which is cheaper) for citrus to incorporate acidity.

A change in culinary culture?

A slow shift in culinary education might also help. The 21-month Culinary Arts program at the Culinary Institute of America (CIA), where Giusti trained, is the most renowned chef-education program in the country. The school also offers bachelor’s degrees that build on the chef training. Those degrees used to be solely focused on business, but in 2015, CIA introduced an Applied Food Studies degree.

Denise Bauer, the CIA’s dean of liberal arts and food studies, said the degree was created partially in response to student demand. “Students were coming to me saying ‘I want to do something about world hunger,’ or ‘I want to fix the broken food system,’” she recalls. “They’re asking big questions, which is really new. If they’re going to be in the kitchen, they want to be doing it with a greater purpose.”

Between 10 and 20 percent of the bachelor’s degree students at the CIA are now majoring in Food Studies, which involves working on projects related to food policy, ecology, and history in addition to the traditional chef training. Some are even taking on school food internships at local school districts in Poughkeepsie and Hyde Park, New York.

They’re likely inspired not only by a chef of Giusti’s caliber taking on feeding the next generation, but also by the chefs he’s recruited to support Brigaid.

In June, chefs like Jessica Koslow of Sqirl in Los Angeles, Jeremiah Langhorne of The Dabney in Washington, D.C., and David Posey of Elske in Chicago went to New London for a “$1.25 Throwdown.” They took on the challenge of cooking within Brigaid’s budget to inspire chefs like Kennedy with new menu ideas and raised more than $30,000 that will go back to the New London schools to help with the food and labor costs. Last month, Giusti headed to Michelin-starred The Restaurant at Meadowood in Northern California for a collaborative dinner alongside chefs Christopher Kostow, Nancy Silverton, and others to raise more.

Still, those splashy, celebrity chef-filled days are few and far between. Most days, Kennedy said, he’s setting up the kitchen as the sun rises and celebrating small victories, like the fact that most kids in New London now eat kale. And they know what cauliflower is, even if they don’t all like it.

“The reason it’s hard is not because of the budgets, the guidelines. It’s because you can show up every day and crush it and it doesn’t necessarily mean anything,” says Giusti. “Kids leave lunch, and that was just lunch. No one’s thinking about it any longer than that.”

But if “just lunch” for kids who previously balked at straying from processed chicken nuggets and chocolate milk was a plate of homemade hummus and vegetables, “crushing it” might also take on new meaning. That’s a shift in thinking that Giusti hopes more of today’s chefs might be willing to make.