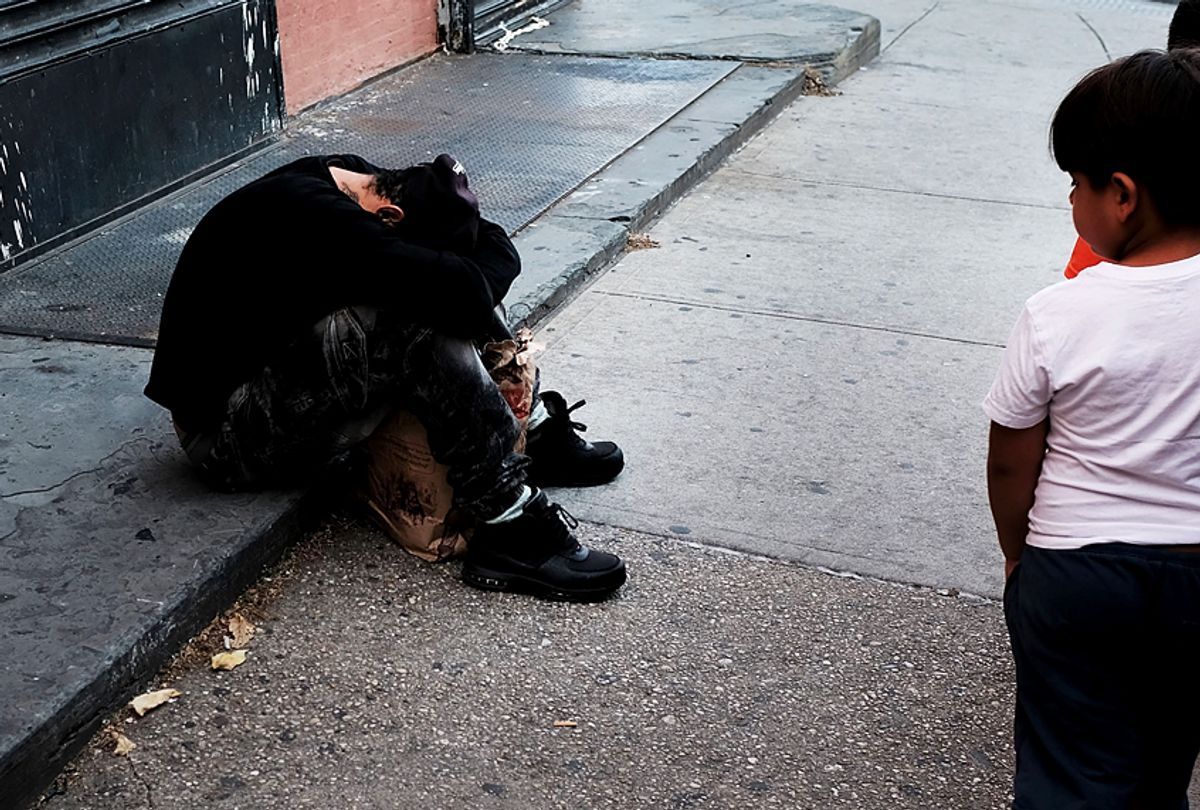 Children walk by drug users passed out along a street in a South Bronx neighborhood which has the highest rate of heroin-involved overdose deaths in the city. (Getty/Spencer Platt)
--

On Friday, the Financial Times reported that billionaire pharmaceutical tycoon Richard Sackler has secured a patent for a new drug to treat opioid addiction.

The drug, a reformulation of buprenorphine, is essentially just a milder opioid that can blunt the symptoms of withdrawal while a person is being weaned off — competing variants of which are already generating nearly $900 million in U.S. sales.

Sackler's family also happens to own Purdue Pharma, the company that first developed OxyContin — a powerful narcotic painkiller that has been blamed for spurring the epidemic of opioid addiction that has decimated communities all across America.

In other words, Sackler made millions off of sales of a drug that caused a massive public health crisis — and now he stands to make millions more by selling the public a solution.

Purdue, one of several drug companies that made a decades-long push for liberal prescription of opioids, is currently facing a mountain of lawsuits. Prosecutors in several states allege Purdue was aware of the risk of addiction and overdose, but deceived doctors and patients and downplayed the risks to increase their sales — a charge the company denies. Massachusetts Attorney General Maura Healey directly names several members of the Sackler family as defendants.

The National Institute of Drug Abuse estimates that up to 12 percent of patients prescribed an opioid develop an abuse disorder, and as many as 6 percent eventually switch to heroin. More than 115 people a day are now killed by opioid overdoses.

Rural areas have been especially impacted, with an astonishing 74 percent of farmers reporting they or someone they know is suffering from opioid addiction.

While increased availability of addiction treatment is a good thing, it is not a solution to the epidemic. Opioids remain a necessary tool to treat severe pain from surgery, cancer, and other serious conditions, but they must be used judiciously, and alternative therapies must be made available — particularly in lower-income rural areas where people are at higher risk.