Based on Facebook’s advertising policies, “false content” is not permitted on landing pages for paid ads 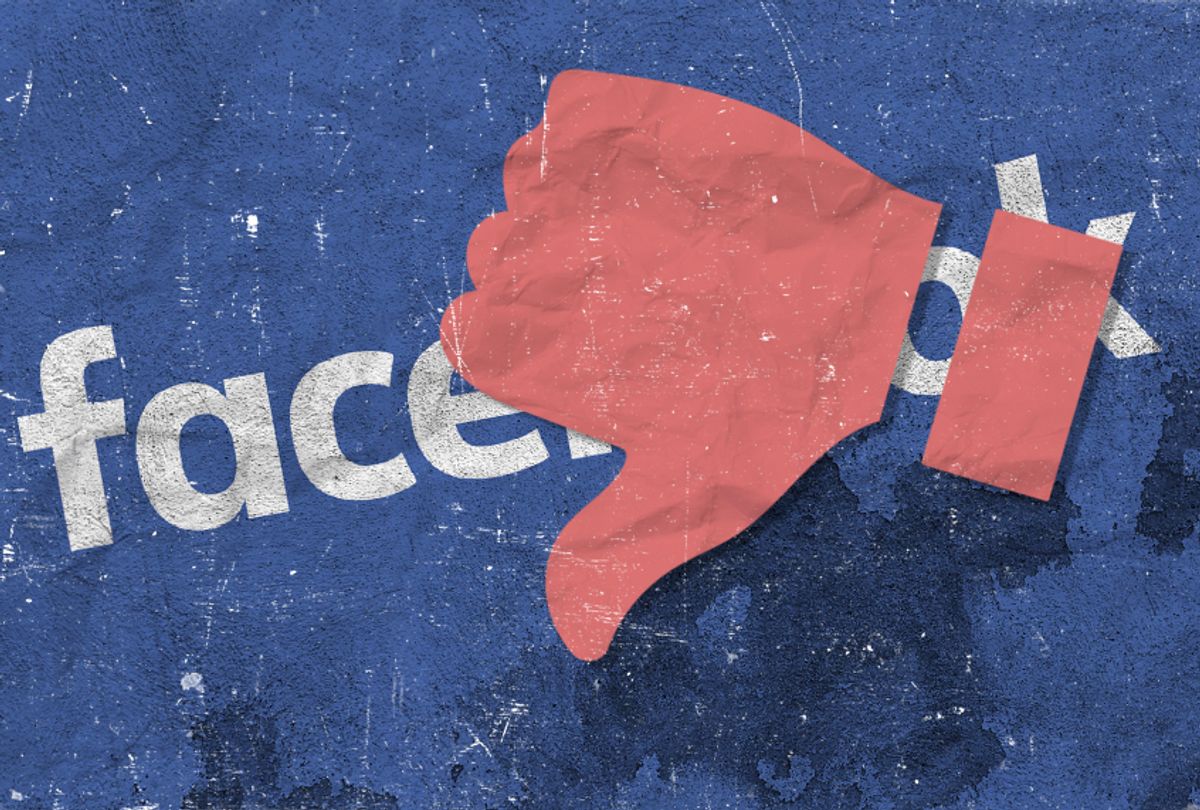 Facebook’s archive of political ads is riddled with links to debunked fake news articles and headlines and content that pushes conspiracy theories.

Based on Facebook’s advertising policies, “false content” is not permitted on landing pages for paid ads. However, none of the examples of prohibited content listed in the policy refer to false news. 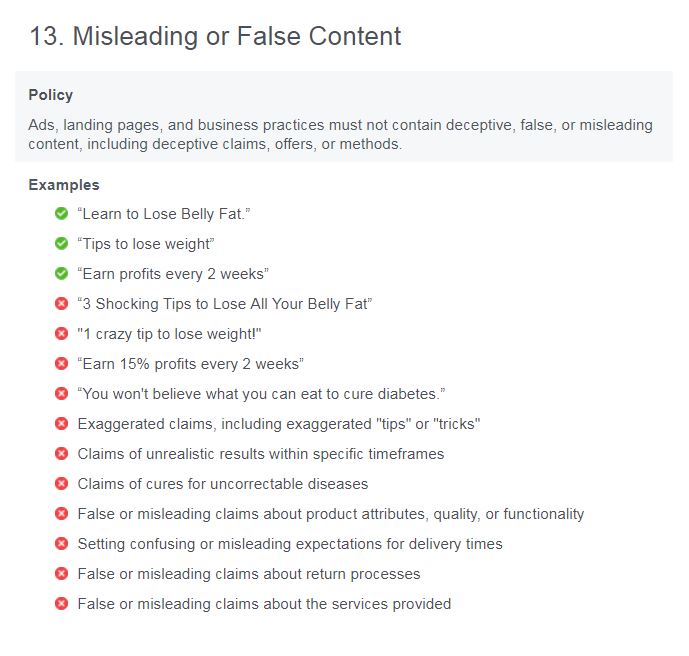 In addition, Facebook permitted white supremacist Paul Nehlen to run ads on its platform and allowed other pages to advertise posts that contain racist content. 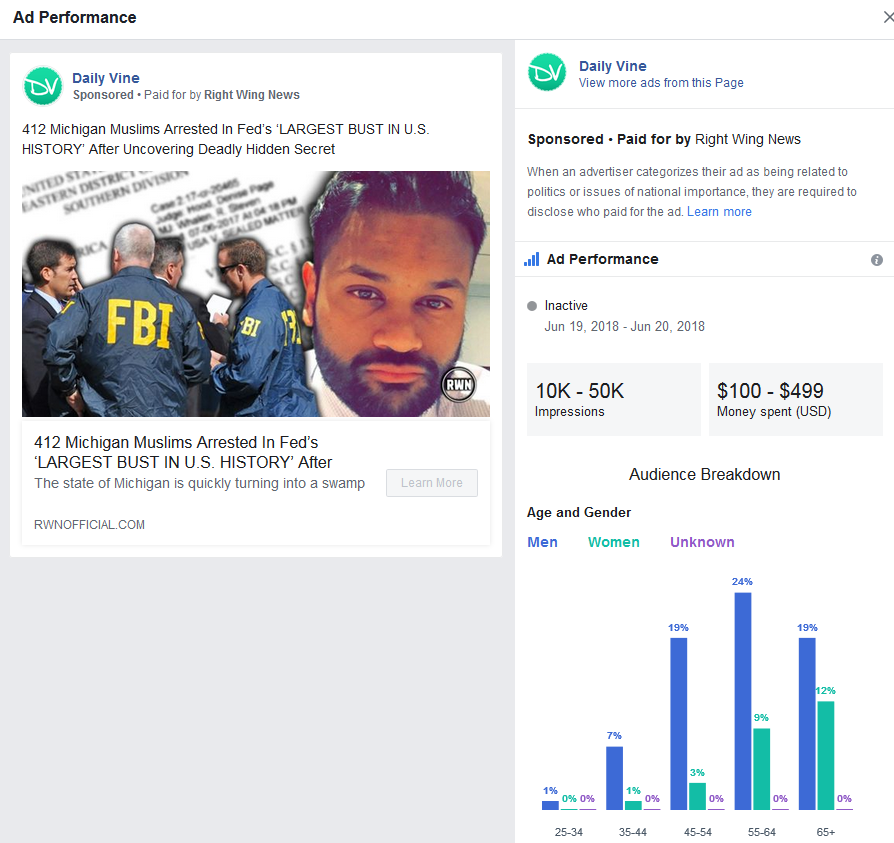 Other political ads paid for by Right Wing News contained fake news clickbait headlines which completely misrepresented stories. One headline stated that snipers stopped an attack on President Donald Trump during his July visit to Scotland. Another headline read “Hillary has hell to pay after Muslim fam found with secret info on 40 house members.” And an additional headline claimed that first lady Melania Trump had thrown out“Michelle [Obama]’s nasty bloated stash.” Examples of other headlines containing false information stated that Trump had to go to intensive care; that Trump banned reporters from the White House; that Bernie Sanderswas “found guilty”; and that Trump “busted Obama’s entire administration in [a] massive coverup.”Facebook had previously removed four ads paid for by Right Wing News for violating the platform’s advertising policies, but it did not specify which policy was violated.

A few political ads linked to the fake news site YourNewsWire. One ad featured a fake anti-LGBT story from YourNewsWire whose headline read “Pedophilia included as ‘sexual orientation’ on the new LGBT pride flag.” Another ad falsely claimed that an FBI official who “exposed Clinton’s ‘Fast & Furious’ cover up” was murdered.

Far-right conspiracy theories were also featured in some paid political ads. Facebook allowed multiple adspromoting pages dedicated to the QAnon conspiracy theory, some which were later taken down for running political content without a “paid for by” label. Other paid ads, including one from the Constitution Party of Florida, pushed QAnon claims. And two other pages promoted QAnon merchandise on political ads. Conspiracy theories related to Pizzagate and the murder of Democratic National Committee staffer Seth Rich were also pushed through Facebook’s paid ads. One page affiliated with the 9/11 truth movement paid for five adson Facebook (which were later taken down by Facebook for containing political content and not having a “paid for by” label), all five of which spread false conspiratorial claims about 9/11. Anti-vaccine conspiracy theoriesalso run rampant on Facebook ads, posted by anti-vaxxer pages World Mercury Project, Stop MandatoryVaccinations, and others.

Facebook has also permitted ads that promote white supremacists. The white supremacist Paul Nehlen, who was banned from Twitter and even the alt-right platform Gab, posted 18 paid political ads on Facebookboosting his primary challenge against Paul Ryan, R-Wis. Most ads talked about his candidacy and campaign events. However, in one ad, Nehlen linked to the website of white supremacist and 2017 Unite The Right rally participant Christopher Cantwell and called Democrats the “champions” of “homosexuality” and “transgenderism.” Another advertisement attacked transgender people and included a meme from the anti-LGBT extremist The Activist Mommy. 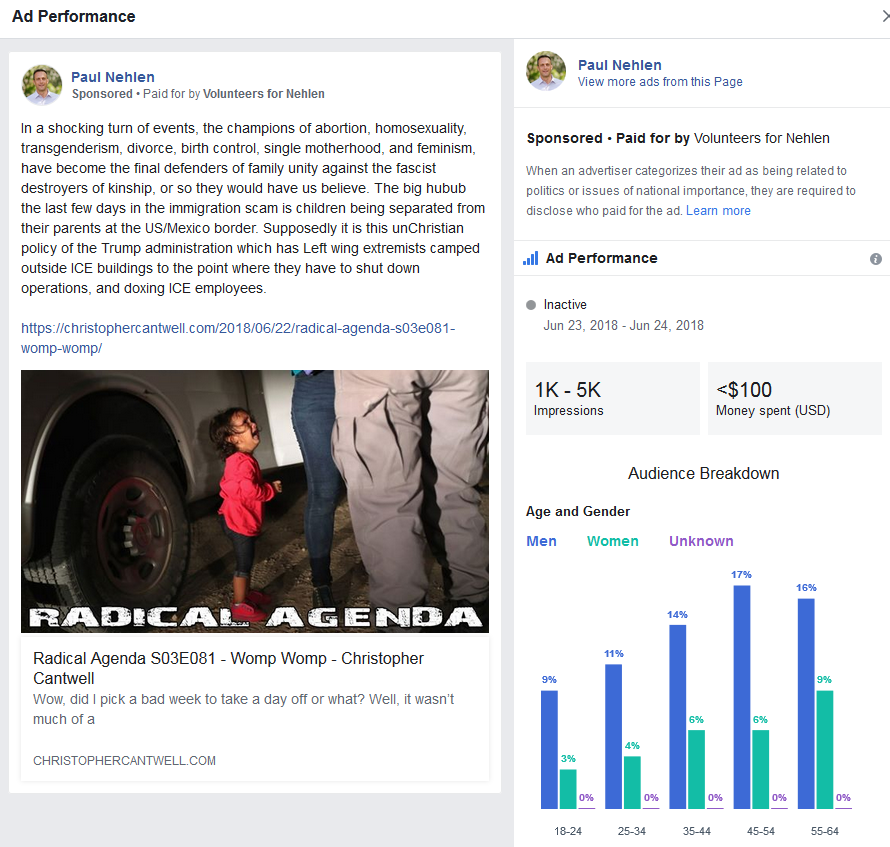